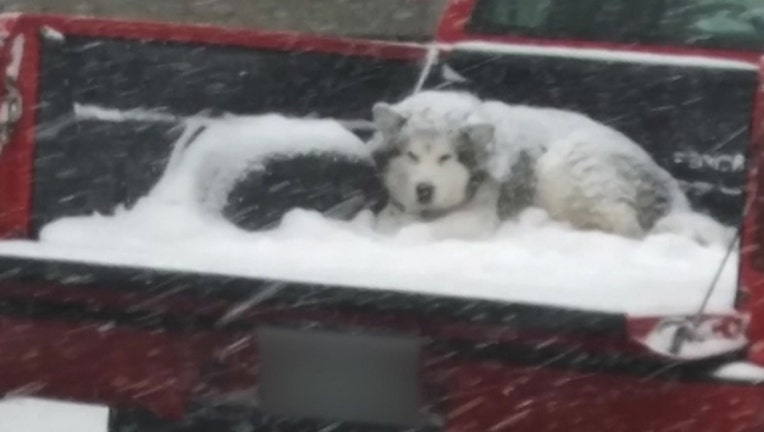 Parker, Colo. - A photo going around social media showing a dog in the back of a pick-up truck covered in snow is angering many animal lovers.

Kayla Hall was driving when she spotted a dog, barely visible underneath a blanket of snow. She snapped a photo.

Dr. Missy Tasky of the Gentle Touch Animal Hospital tells Fox 31 it was “a recipe for disaster.”

"In that situation, where there's nowhere for him to go, you know, it could be very problematic," Tasky said.

The temperature outside when the photo was taken was reportedly 16 degrees, with a wind chill of zero. The truck was going nearly 50 miles per hour, which most likely made it even colder to the dog.

“That breed of dog can withstand extreme temperatures, extreme cold, a lot better than the average dog. But in general with hypothermia, just like for people, they can get the frostbite situation. It could cause their blood pressure to drop. their heart rate to drop,” Dr. Tasky said.

A spokesperson for the Colorado state patrol said this scenario could be considered animal cruelty, although it’s not illegal to have a dog in the back of a truck.

"The law is not cut-and-dry on this but the driver could be cited with a violation of animal cruelty if there was enough evidence.”

Dr. Tasky said legal or not, this is wrong.

"It's heartbreaking to see that. Take into consideration things that might adversely affect us, are going to impact affect our pets as well," Tasky said.