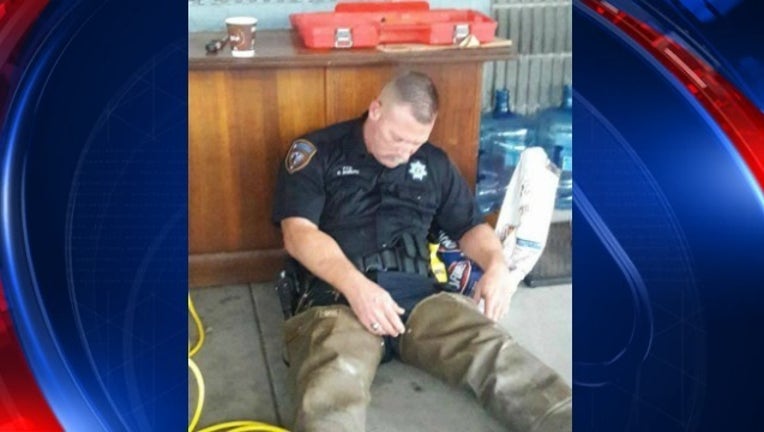 The image is of a Harris County Sheriff's deputy, exhausted during the aftermath.

"This deputy worked 12+ hours through the night, doing high water rescues. Worked until he couldn't stand anymore," Texas Sheriff's Deputies said on Facebook. "This man and hundreds more just like him are out there, saving Texans!"

The Harris County Sheriff's Office shared the original post on Facebook and said the image represents so many first responders and their non-stop dedication to Texans is unbelievable.

"Deputies, dispatch and support staff are working beyond scheduled shifts, getting to victims due to the inundation of high-water rescue calls," the Harris County Sheriff's Office said. "The call for duty is exhausting at times, but it's what we do. Our Detentions staff is tasked with keeping nearly 10,000 inmates, currently in our custody, safe and out of harm's way. They, too, are working on low fumes.

Harvey, which made landfall Friday as a Category 4 hurricane and then lingered just off the coast as a drenching tropical storm, sent devastating floods pouring into Houston on Sunday. The rising water forced a mass evacuation of parts of the city and overwhelmed rescuers who could not keep up with constant calls for help.