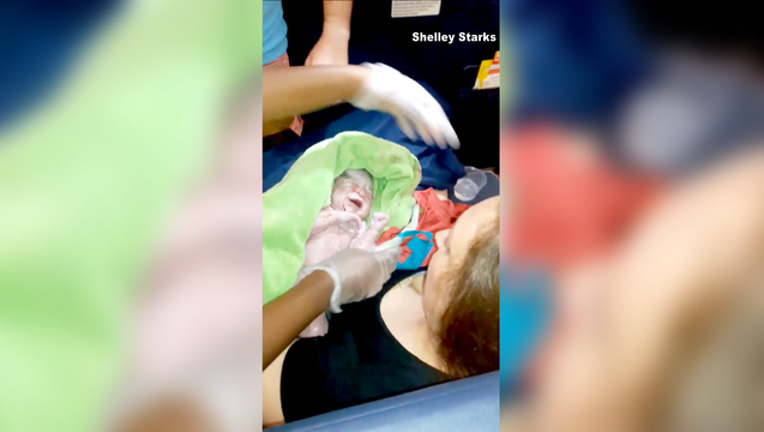 PHOENIX (AP) - Flight attendants huddled around Cristina Penton, handing her wet cloths to keep her cool. One massaged her shoulders, and another told her to stay calm - everything would be OK.

Penton knew something was wrong within 15 minutes of takeoff, when the pregnant mother began to have contractions as often as every five minutes. Once her water broke, she knew her baby boy was going to be born before the plane reached the gates.

"He did what he wanted," she said at a news conference. "We were just along for the ride."

Penton gave birth Saturday night on a Spirit Airlines flight that took a detour to New Orleans when she went into labor. She was 36 weeks pregnant when she boarded the flight from Fort Lauderdale on her way to her home in the Phoenix area with her two other children.

When Penton went into labor, a flight attendant called for doctors to come to the front of the plane. A pediatrician and a nurse, guided by other doctors on the ground, helped Penton give birth to her son, named Cristoph Lezcano.

Penton said at the Tuesday news conference she put her feet up onto the wall in front of her seat and pushed three times. The nurse caught Christoph midair, and the doctor reported he had a good color.

Shelley Starks, who sat one row behind Penton on the flight, said she encouraged Penton to wait to give birth in a hospital. She thought the baby, who was four weeks premature, would be safer in the womb than on the plane.

Penton later said there was no way she could have delayed the birth.

"Everyone told me not to push, but anyone who's had a baby knows it's not an option," Penton said.

When the plane landed, Penton received emergency medical attention and was taken to hospital 10 minutes away. Doctors at a New Orleans-area hospital confirmed both Penton and her newborn were healthy. At birth, Christoph weighed 7 pounds and measured 19.5 inches long.

"It was so surreal," Starks said. "It was incredible to be a part of that, for it to happen right before your eyes."

Penton said she was comfortable flying even at 36 weeks because her other two children were born full term. Her husband, who drove to meet her in New Orleans, later said "I told you so," after warning her not to take the trip.

Spirit Airlines spokesman Paul Berry said some airlines require doctor notes before allowing women far along in their pregnancies to fly. Spirit has no such policy, and instead leaves the choice up to individuals.

"We encourage women to check with their doctors before travelling," he said.

Berry said Wednesday that Cristina Penton and her family can travel on the airline's dime once a year to celebrate her baby's birthday, until he turns 21. The airline also gave Christoph a Spirit Airlines onesie that reads "born to fly" and "early arrival."