The president highlighted the benefits of wearing masks, despite his earlier claims that people who wore them were making a political statement.

House Speaker Nancy Pelosi, D-Calif., reignited her war of words with President Trump on Tuesday, calling the coronavirus the "Trump virus" in an effort to blame the ongoing pandemic on the president's response.

Trump revived the White House's coronavirus task force briefings this week, holding the first once since April, where he urged Americans to wear masks and warned that the pandemic will probably "get worse" before it gets better. He also repeatedly referred to COVID-19 as the "China virus."

RELATED: 'They have an impact': Trump urges Americans to wear masks during coronavirus briefing

During an interview on CNN, though, Pelosi suggested that the president's efforts are too little, too late.

"I think with the president's comments today, he has recognized the mistakes that he has made by now embracing mask-wearing and the recognition that this is not a hoax, it is a pandemic that has gotten worse before it gets better because of his inaction and, in fact, clearly, it is the Trump virus," Pelosi said.

"Well, what do you mean when you say the 'Trump virus,'" CNN anchor Wolf Blitzer asked.

"The Trump virus," Pelosi reiterated. "If he had said months ago 'Let's wear a mask, let's socially-distance' instead of having rallies or political whatever they were, then more people would have followed his lead. He's the president of the United States, instead of being a bad example, making it like a manhood thing not to wear a mask."

The House speaker continued: "A briefing on the coronavirus should be about science and that is something that the president has ignored. It should be about governance and now he's finally embracing saying 'OK, it's OK to wear a mask.' So I think a good deal of what we have suffered is clearly the Trump virus." 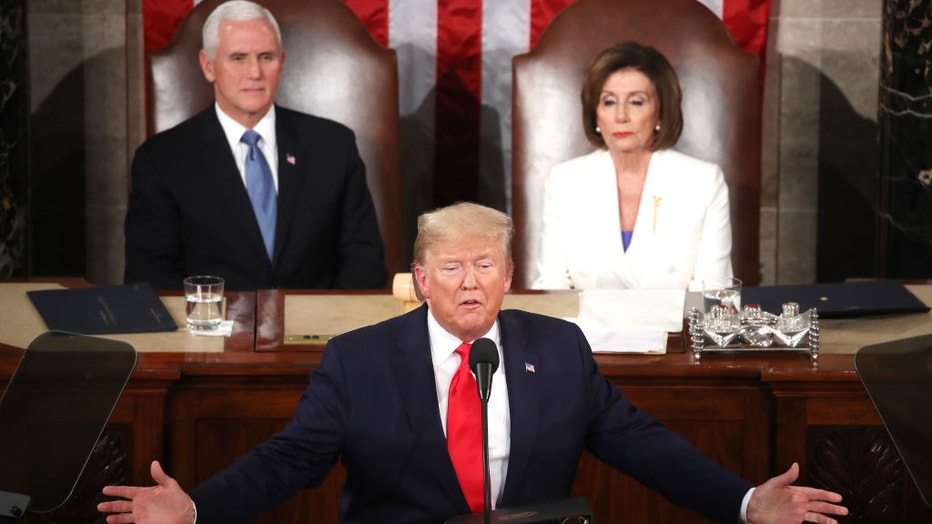 President Donald Trump delivers the State of the Union address House Speaker Rep. Nancy Pelosi (D-CA) and Vice President Mike Pence look on in the chamber of the U.S. House of Representatives on February 04, 2020 in Washington, DC. (Photo by Mark Wil