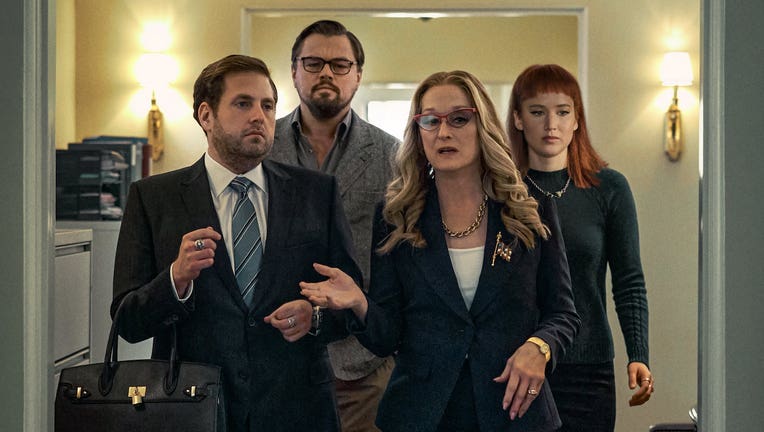 Despite the usual snubs, flubs and surprises, the Academy Award nominations were actually pretty solid this year. In addition to honoring great performances like Penelope Cruz in "Parallel Mothers," Andrew Garfield in "Tick, Tick … Boom!" and Denzel Washington in "The Tragedy of Macbeth," the Academy also rounded up an appreciably diverse list of Best Picture nominees.

All this week we’ll be spotlighting the 10 films nominated for the big prize. And since we could all use more stuff to watch these days, we’ve also rounded up recommendations for movies (and TV shows) that echo or influence them in some way — all of which are streaming (for free!) on Tubi. Next up: Adam McKay’s divisive Netflix comedy "Don’t Look Up."

RELATED: The must-see movies of 2021: Spiderman, The Matrix 4 and more

About "Don’t Look Up"

The premise: "Kate Dibiasky (Jennifer Lawrence), an astronomy grad student, and her professor Dr. Randall Mindy (Leonardo DiCaprio) make an astounding discovery of a comet orbiting within the solar system. The problem — it’s on a direct collision course with Earth. The other problem? No one really seems to care. Turns out warning mankind about a planet-killer the size of Mount Everest is an inconvenient fact to navigate. With the help of Dr. Oglethorpe (Rob Morgan), Kate and Randall embark on a media tour that takes them from the office of an indifferent President Orlean (Meryl Streep) and her sycophantic son and Chief of Staff, Jason (Jonah Hill), to the airwaves of The Daily Rip, an upbeat morning show hosted by Brie (Cate Blanchett) and Jack (Tyler Perry). With only six months until the comet makes impact, managing the 24-hour news cycle and gaining the attention of the social media obsessed public before it’s too late proves shockingly comical — what will it take to get the world to just look up?!"

Our critic’s take: The Terrible Movie That Could

Every year, the Academy nominates a movie so catastrophically bad, it makes one question whether there is any point in giving the Oscars an ounce of our time. Notable examples of this phenomenon include (shudder) "Crash," "Extremely Loud and Incredibly Close," "The Help" and "Green Book" — and this is without diving deep into the history of cinema before the turn of the 21st century. "Don’t Look Up" holds this year’s dubious distinction for being The Terrible Movie That Could.

"Don’t Look Up" shares some of the bamboozling strengths of its notorious predecessors. It’s helmed by Adam McKay, the celebrated director of such classics as "Anchorman: The Legend of Ron Burgundy" — a far more sociologically insightful film than this dreck — and the Oscar-winning "The Big Short." It boasts a star-studded cast whose talents might be the only reason this film is remotely watchable. And much to the delight of a Hollywood that desperately wants to fight any critiques of being "out of touch," it tackles such hot-button issues as climate change, clickbait wars, misinformation campaigns, political tribalism and the horror of social-media-infographic-as-substitute-for-intellectual-discourse trend.

The problem is "Don’t Look Up" is the cinematic equivalent of the social media infographic. The joke-a-minute humor is smug and heavy-handed, even more obvious than the gigantic meteor barreling towards Earth in the film. The punch these punchlines are meant to pack is thrown feverishly at so many targets that they have the impact of a slap on the wrist: the scientist enamored with his own fame (Leonardo DiCaprio), the president who only cares about her poll numbers (Meryl Streep), her bro-ish inept chief-of-staff son desperate for mommy’s love (Jonah Hill), the narcissistic tech billionaire who firmly believes himself to be humanity’s only hope (Mark Rylance).

In short, the movie simply isn’t as funny as it thinks it is — and it doesn’t seem to trust the audience’s intelligence on either side of the divide. A fatal flaw in a film that dubs itself satire.

There are scenes where you can glimpse a better movie than the one that was offered — Timothée Chalamet’s soulful and earnest discussions on faith, Cate Blanchett’s self-involved TV host choosing to get drunk as the planet waits for doom and a dinner scene near the film’s bitter end are all moments grounded in emotional vulnerability. One wishes we could have had some more of that humanity in a movie that tries to point out we are worthy of being preserved. [Ines Bellina]

How to watch "Don’t Look Up"

Streaming: "Don’t Look Up" is streaming exclusively on Netflix.

Rent or own: No release date for a DVD and/or Blu-ray release of "Don’t Look Up" has been announced.

On the big screen: "Don’t Look Up" is still playing in limited theaters across the country.

About the writer: Ines Bellina is a writer, translator, and bon vivant. You can read her work at The A.V. Club, Consequence, Shondaland, Chicago Magazine, and more. Follow her on Twitter at @ibwrites for her hot takes on #BachelorNation.

What to watch next

For better or for worse, "Don’t Look Up" is a comedic concoction all its own. That makes it hard to recommend a direct parallel for Adam McKay’s star-studded dark comedy about the end of the world. But if you mix the apocalyptic drepression of "Melancholia" with the principled debate of "12 Angry Men" and the political absurdity of "The Interview," you might come close. Maybe. Sort of. A little.

Allison Shoemaker and Caroline Siede contributed to this report.