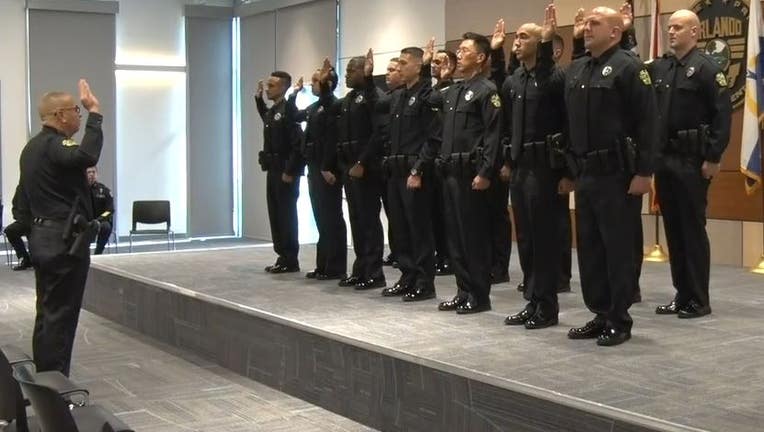 ORLANDO, Fla. - Police Chief Orlando Rolon swore in a new group of recruits to the Orlando Police Department on Tuesday.

The department says the group of thirteen officers brings 20 years of law enforcement experience with more than half having a military background.

Chief Rolon says many of the new officers are bilingual.

"At the end of last year we were about 35 positions short. That has nearly doubled. We are all competing for the most highly qualified individuals," he said.

Like many other jobs, Chief Rolon says his department and others are looking for more help. He says the new class will help fill the gaps.

One new recruit is the son of a detective who recently retired from the department.

"How people treated him and the respect he gained from the community, it made it that much for me wanting to do this job," said new recruit Todd Montford.

Other new officers came from other agencies.

"I originally worked for the Orange County Sheriff’s Office which is also an impeccable agency, however my eyes have always been on the Orlando Police Department. I think this agency has the best training in Central Florida if not the state," said Officer Michele Rohlf.

This is the last class Chief Rolon is swearing in. He is set to retire in August.