Teens getting arrested in connection with TikTok 'Orbeez Challenge'

Law enforcement agencies in Central Florida have put out a warning about a social media trend.

VOLUSIA COUNTY, Fla. - Law enforcement agencies in Central Florida have put out a warning about a recent social media trend that is taking place across the country.

Caught on a Ring doorbell camera, a Volusia County mother seen pushing a baby in a stroller up her driveway is struck in the arm in what deputies are calling a TikTok "Orbeez Challenge" incident.  Multiple police departments and sheriff's offices have been receiving reports of people hit by Orbeez gel beads, fired from toy blaster guns.

Law enforcement agencies in Central Florida have put out a warning about a social media trend: the Orbeez Challenge. Multiple police department and sheriff's offices have been receiving reports of people hit by Orbeez gel beads fired from toy blaster guns.

Deputies also shared video captured on an Amazon driver’s onboard camera showing a car coming around the corner, slowing down as the driver sticks his toy guy out the window and starts firing.  A day later deputy body worn camera video shows one of the suspects getting arrested.

"It’s going to be one of those Orbeez guns. Same, same occurrence as yesterday that we have two in custody for, and I’ve got three over here," a deputy can be heard saying in the video. 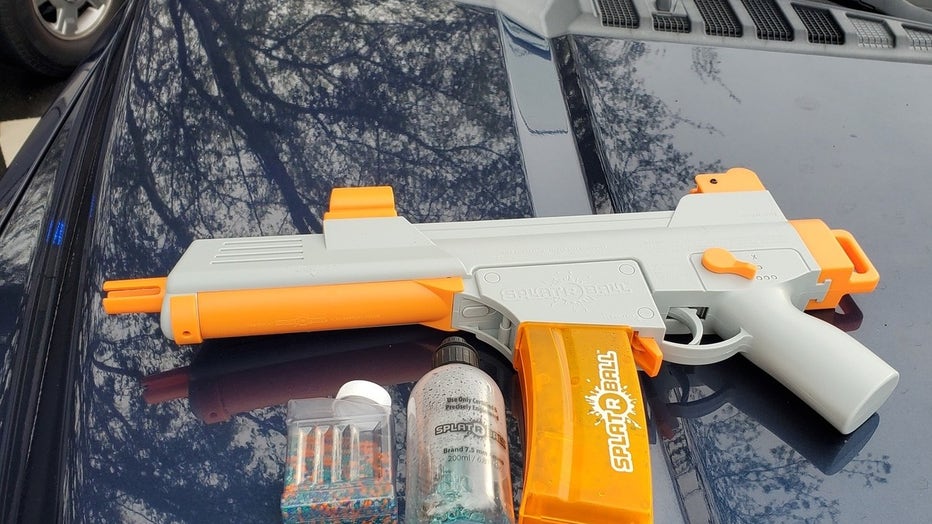 "Recently, deputies arrested a 19-year-old man who shot an Amazon delivery driver in Deltona, hitting him in his glasses and his neck while he was driving his route. The same shooter also shot another random adult and a 10-year-old child in the face and chest," the Volusia County Sheriff's Office wrote on Facebook.

Deputies identified and located the suspect, charging him with shooting into an occupied vehicle, child abuse, and two counts of battery.

Two more victims at Wes Crile Park in Deltona were hit by pellets fired from a van that took off after the shooting, deputies said. This happened all in the same day. Another victim who was trimming trees outside a Deltona home was shot in the back.

"The pellets broke the skin and left red welts. He described the same van that was reported by the victims from Wes Crile Park."

Ocala police officers also say they have responded to reports of people being shot with the water beads at random.

"These beads can cause serious injury when fired from an air-powered gun. In many instances, these air guns are painted to resemble real functioning firearms," police said. "Recently, we've responded to several incidents where people were shot by these types of air guns. We encourage parents to discuss the dangers of this type of activity with their children."

A victim from an incident in Winter Garden spoke exclusively with FOX 35 News.  He was working for a customer up on a ladder fixing the screen on a second story window when says he was struck dozens of times.

"I was shot in the back. At first, it was probably about 30 times in the back, and then I turned around and looked and a couple of times in the face.  It sounded like air soft gun rapid fire," said the man who did not want to be identified.

These gel blaster guns and Orbeez that are being used as ammo can be found in the toy aisle of big box stores and online.  But Winter Garden Police Captain Scott Allen warns if you shoot people with them, you could find yourself in big trouble.

"These kids think it’s funny. They’re violating the law. They’re committing a battery. If the pellet happens to injure the person to the point it breaks the skin, could be looking at a felony charge. These things don’t go away. Could affect your future," said Captain Allen.

Winter Garden Police say late Wednesday they identified one of the four suspects from their incident on Tuesday.  WGPD say that group of teens could possibly be linked to similar incidents in two other police jurisdictions as well.

It’s been reported that videos of the "Orbeez Challenge" have been circulating on TikTok during Spring Break as well.

"Just be aware that these shootings are crimes, and when you are identified you may face criminal charges for your part in the challenge," Volusia deputies said.