ORANGE COUNTY, Calif. - Divers contracted to investigate the source of a massive oil leak off the coast of Orange County confirmed that a large section of a 17.7-mile pipeline was moved out of place by as much as 105 feet, and a 13-inch "split" in the line was detected, officials said.

According to the unified command responding to the leak -- including the Coast Guard, state Department of Fish & Wildlife and oil rig "Elly" and pipeline owner Amplify Energy -- the divers confirmed conditions originally spotted by remotely operated vehicles that were initially sent to inspect the pipeline.

Authorities are continuing their search for answers on what caused the massive Huntington Beach oil spill.

Divers confirmed that a 4,000-foot section of the pipeline was "displaced," or moved laterally by 105 feet, and they spotted a 13-inch split in the line. Coast Guard Capt. Rebecca Ore said that split is the "likely source" of the leak. The size of the spill was initially estimated at 126,000 gallons, but that number rose to 144,000 gallons by Monday morning, according to Huntington Beach Mayor Kim Carr. However, authorities were bracing for a worst-case scenario; on Thursday it appeared that the size of the spill could be much lower than anticipated.

"There's speculation of about 30,000 gallons, but that's not been confirmed,'' Orange County Supervisor Lisa Bartlett said. "But that would make more sense,'' adding that the amount of wildlife so far affected by the spill does not reflect a larger oil spill.

At a news conference Thursday afternoon, a U.S. Coast Guard official estimated that roughly 588 barrels of oil had spilled, which would equate to about 24,700 gallons.

Ore said no more oil was seen coming out of the 13-inch break in the line. Amplify Energy CEO Martyn Willsher said the split in the line occurred at the point where the pipeline was most severely displaced, by 105 feet. He said the pipeline is a 16-inch steel pipe covered in concrete, indicating it would take a great deal of force to move and rupture it.

Willsher confirmed Monday that the possibility of a ship's anchor causing the break is among the options being examined as a potential cause.

The Orange County Board of Supervisors on Tuesday ratified an emergency declaration issued the previous day by Board Chairman Andrew Do. The supervisors were meeting in closed session Tuesday afternoon to discuss joining expected litigation related to the spill.

Gov. Gavin Newsom proclaimed a state of emergency in Orange County on Monday night to support the response to the oil spill.

"The state is moving to cut red tape and mobilize all available resources to protect public health and the environment," Newsom said.

Orange County's emergency management director Michelle Anderson told supervisors on Tuesday that spill estimates range between 120,000 to 150,000 gallons of oil. The plume has drifted as far south as Dana Point, shutting down harbors from Newport to Dana Point. Oil will continue flowing south with the current as it stands, with some already being seen in Laguna Beach, Ore said.

Federal investigators have released some preliminary findings about what may have caused an underwater oil rig to rupture and spill some 3,400 barrels of crude oil into Huntington Beach.

As of Saturday, about 5,544 gallons of oil had been recovered and 12,160 feet of boom has been deployed to contain it, officials said.

13.5 barrels of tar balls were recovered Friday and approximately 232,500 lbs. of oily debris has been recovered from shorelines.

An estimated 15.67 miles of light oiling has been reported along Orange County shorelines, according to the unified command.

Crews are working around the clock to clean up the massive oil spill in Huntington Beach.

The leak reported Saturday has fouled the sands of famed Huntington Beach and other coastal communities. The spill could keep beaches closed for weeks or months.

The U.S Coast Guard is leading the response to the spill, which originally covered about 5.8 nautical miles between the Huntington Beach Pier and Newport Beach; however, on Thursday officials stated the oil was showing up along San Diego County.

The spill emanated from a facility operated by Beta Offshore about five miles offshore and was likely caused by a pipeline leak.

The spill was reported at about 9 a.m. Saturday and drew a response from all levels of government, with a unified command established to handle the environmental crisis.

Beach area between Huntington and Newport closed due to oil spill

A 126,000-gallon oil spill from an offshore rig caused major ecological damage in the waters off Huntington Beach; officials closed the area to beachgoers.

Huntington Beach Mayor Kim Carr described the situation as a "potential ecologic disaster," as oil was washing up on shore and impacting the Talbert Marshlands and the Santa Ana River Trail.

"The spill has significantly affected Huntington Beach, with substantial ecological impacts occurring at the beach and at the Huntington Beach Wetlands," a city statement said.

"It is imperative that the federal government assist in recovery efforts. Constituents who live along the shoreline are already reporting oil on the beach and strong odors,'' Steel wrote. "Officials are already responding to protect sea life. Dead fish and birds are already being reported on beaches and shorelines. I have serious concerns about the environmental impacts of the spill and applaud the workers who are doing their best to prevent the oil from hitting sensitive wetlands.''

Skimming equipment and booms were deployed to prevent the inflow of oil into the Bolsa Chica Ecological Reserve and Huntington Beach Wetlands. The California Department of Fish & Wildlife set up the Oiled Wildlife Care Network hotline, at 877-823-6926, for people to call if they see wildlife impacted from the oil. Members of the public were urged not to approach wildlife. 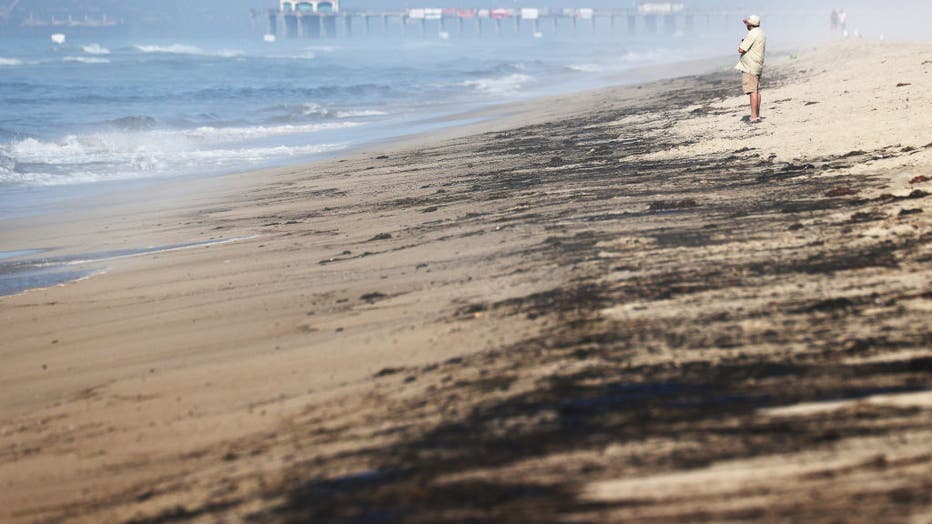 HUNTINGTON BEACH, CALIFORNIA - OCTOBER 03: A person stands near oil washed up on Huntington State Beach after a 126,000-gallon oil spill from an offshore oil platform on October 3, 2021 in Huntington Beach, California. The spill forced the closure of

Boaters who incur any oil damage to their crafts were asked not to clean the boats themselves since they could spread the oil, but to contact county officials who could refer them to the proper channels for possible reimbursement of cleaning expenses.

RELATED: Beaches closed as crews attempt to clean up shoreline

WHAT ABOUT AFFECTED ANIMALS?

In terms of wildlife and damage, crews are still assessing the spill's impact.

Animal experts are asking people to not touch the affected animals. However, those who do come across the animals hurting from the spill to call the Care Network Hotline at 877-823-6026.

Crews are seeing fewer injured animals than they initially expected, considering the size of the spill. So far nearly 20 oiled birds were recovered alive, five were found dead.

So far, seven ecological reservoir areas across the coast are being closed off, and the California Fish and Wildlife is working with Coast Guard to deal with the problem, but again, the damage will be assessed later. The emphasis right now is to find and help injured wildlife and protect sensitive areas as much as possible.

Experts warn the public to NOT touch the animal affected by the California oil spill.

The city closed ocean access from the Pier down to the Santa Ana River jetty. State beaches are also closed. Carr said the closures could last anywhere "from a few weeks to a few months.''

Health officials warned people not to swim, surf or exercise by the beach because of the potential health hazards.

126,000 gallons of oil spilled into the water off the coast of Orange County. Several beaches in Huntington Beach are closed as crews clean up the mess.

The spill also caused Huntington Beach to cancel the final day of the Pacific Airshow, which drew hundreds of thousands of people to the shore on Saturday.

"The city fully acknowledges the gravity of the decision to cancel the final day of the iconic Pacific Airshow, and the disappointment that this decision will cause," Huntington Beach officials said in a statement. "However, the need for prompt and intensive intervention efforts requires complete and unfettered access to the marine environment."

Huntington Beach Mayor Kim Carr described the situation as a potential ecologic disaster, and said some of the oil had reached the shore and was impacting the Talbert Marshlands and the Santa Ana River Trail.

The oil spill occurred in federal waters at the Elly platform, which was built in 1980 and processes crude oil from two other platforms that comes from a large reservoir called Beta Field. Houston-based Amplify Energy Corp. is the parent company of Beta Offshore.

"Workers moved to shut down the pipeline and used pressurized equipment to retrieve as much oil as possible soon after the incident was reported at 12:18 p.m.,'' Kate Conrad of Beta Offshore said.

The head of Amplify Energy joined Coast Guard, state wildlife and county officials at a news conference Sunday in Long Beach, where he said company divers were on location investigating the source and potential cause of the leak.

"Our employees live and work in these communities and we're all deeply impacted and concerned about the impact on not just the environment but the fish and wildlife as well,'' Amplify President and CEO Martyn Willsher said. "We will do everything in our power to ensure that this is recovered as quickly as possible, and we won't be done until this is completed.''

Willsher said the company's complicated processing operation, which includes about 70 wells and two producing platforms, was shut down entirely for now.