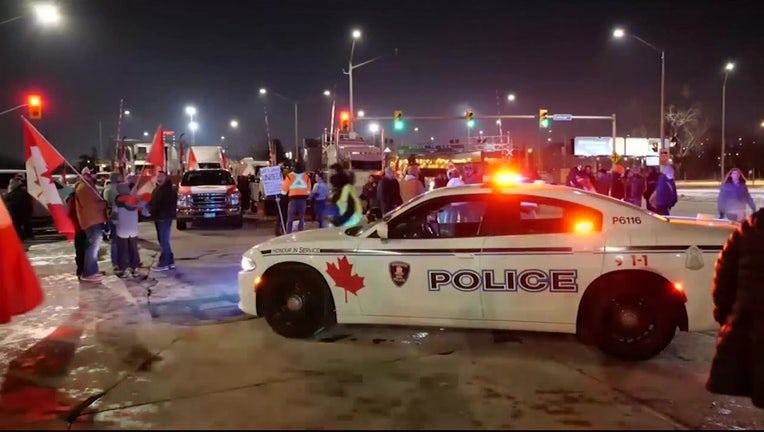 OTTAWA, Ontario (AP) - Prime Minister Justin Trudeau has decided to invoke emergency powers across all of Canada to quell the protests by demonstrators who have paralyzed Ottawa and blocked border crossings in anger over the country's COVID-19 restrictions, a senior government official said Monday.

The prime minister met virtually with the leaders of Canada's provinces and planned to address the nation late in the afternoon.

In recent days, Trudeau rejected calls to use the military but otherwise said "all options are on the table" to end the protests, including invoking the Emergencies Act, which gives the government broad powers to restore order.

The government official who confirmed Trudeau's plans gave no immediate details on precisely how Trudeau intends to use his emergency authority. The official was not authorized to discuss the matter publicly and spoke on condition of anonymity.

For more than two weeks, hundreds and sometimes thousands of protesters in trucks and other vehicles have clogged the streets of Ottawa, the capital, railing against vaccine mandates for truckers and other COVID-19 precautions and condemning Trudeau's Liberal government.

Members of the self-styled Freedom Convoy have also blockaded various U.S.-Canadian border crossings, though the busiest and most important -- the Ambassador Bridge connecting Windsor, Ontario, to Detroit -- was reopened on Sunday after police arrested the last of the demonstrators and broke the nearly week-long siege that had disrupted auto production in both countries.

"This is the biggest, greatest, most severe test Trudeau has faced," said Wesley Wark, a University of Ottawa professor and national security expert.

The Conservative premier of Ontario, which is Canada's most populous province and includes Ottawa and Windsor, indicated support for the emergency action before the meeting with Trudeau.

But at least three other provincial leaders -- from Quebec, Alberta and Saskatchewan -- warned Trudeau against taking emergency action, some of them cautioning that such a move could inflame an already dangerous situation.

"At this point it would not help the social climate. There is a lot of pressure and I think we have to be careful," said Quebec Premier Francois Legault. "It wouldn't help for the polarization."

The protests have drawn support from right-wing extremists and armed citizens in Canada, and have been cheered on in the U.S. by Fox News personalities and conservatives such as Donald Trump.

Other conservatives pushed Trudeau to drop the pandemic mandates.

"He's got protests right around the country and now he's dropping in the polls, desperately trying to save his political career. The solution is staring him in the face," said said opposition Conservative lawmaker Pierre Poilievre, who is running for the party's leadership. "All he has to do is listen to the experts, do what other countries are doing, and that is eliminate these mandates and restrictions, and to let the protesters, including the truckers, to go back to their jobs and lives,"

In other developments, the Royal Canadian Mounted Police said they arrested 11 people at the blockaded border crossing at Coutts, Alberta, opposite Montana, after learning of a cache of guns and ammunition.

Police said a small group within the protest was said to have a "willingness to use force against the police if any attempts were made to disrupt the blockade." Authorities seized 13 long guns, handguns, sets of body armor, a machete, a large quantity of ammunition and high-capacity magazines.

Alberta Premier Jason Kenney also said protesters in a tractor and a heavy-duty truck tried to ram a police vehicle at Coutts on Sunday night and fled.

"This is extremely concerning," he said. "There is, at least in that case, a small cell of people who wanted to take this in a very dangerous and dark direction."

Over the past weeks, authorities have hesitated to move against the protesters around the country. Local officials cited a lack of police manpower and fears of violence, while provincial and federal authorities disagreed over who had responsibility for quelling the unrest.

Invoking the Emergencies Act would allow the federal government to declare the Ottawa protest illegal and clear it out by such means as towing vehicles, Wark said. It would also enable the government to make greater use of the Mounties, the federal police agency.

An earlier version of the Emergencies Act, called the War Measures Act, was used just once during peacetime, by Trudeau's late father, Prime Minister Pierre Trudeau, to deal with a militant Quebec independence movement in 1970.

Invoking emergency powers would be "a signal to both Canadians across the country and also an important signal to allies like the United States and around the world who are wondering what the hell has Canada been up to," Wark said.

The demonstrations have inspired similar convoys in France, New Zealand and the Netherlands. U.S. authorities have said that truck convoys may be in the works in the United States.

Also Monday, Ontario Premier Doug Ford announced that on March 1, Canada's most populous province will lift its requirement that people show proof of vaccination to get into restaurants, restaurants, gyms and sporting events. The surge of cases caused by the omicron variant has crested in Canada.

"Let me very clear: We are moving in this direction because it is safe to do so. Today's announcement is not because of what's happening in Ottawa or Windsor but despite it," Ford said.

The province will also remove its 50% capacity limit on restaurants on Thursday, four days earlier than planned. Ford gave no timetable for dropping the requirement that people wear masks in public places.

Ford said he would support Trudeau's government if it proposed further measures to quell the protests.

"We need law and order. Our country is at risk now. It's not just happening here in Ottawa, but it's happening in Alberta and British Columbia," Ford said. "We won't accept it."

Police in Windsor arrested 25 to 30 protesters and towed several vehicles Sunday near the Ambassador Bridge. The span, which carries 25% of all trade between the two countries, reopened to traffic late Sunday night.

The interruption in the flow of goods forced General Motors, Ford, Toyota and other automakers to close plants or curtail production on both sides of the border.

The siege in Ottawa, about 470 miles (750 kilometers) away, has infuriated residents fed up with government inaction. They have complained of being harassed and intimidated by the protesters who have parked their rigs on the streets.

"It's stressful. I feel angry at what's happening. This isn't Canada. This does not represent us," Colleen Sinclair, a counter-protester who lives in Ottawa.

Sinclair said all demonstrators have had their say and need to move on -- with police force, if necessary.

"They're occupiers," she said. "This is domestic terrorism and we want you out of our city. Go home."

Many of Canada's COVID-19 restrictions, such as mask rules and vaccine passports for getting into restaurants and theaters, are already falling away as the omicron surge levels off.

Pandemic restrictions have been far stricter in Canada than in the U.S., but Canadians have largely supported them. The vast majority of Canadians are vaccinated, and the COVID-19 death rate is one-third that of the United States.

On this edition of Let It Rip, the panel discusses the protest over Covid mandates that has closed the Ambassador Bridge for days.