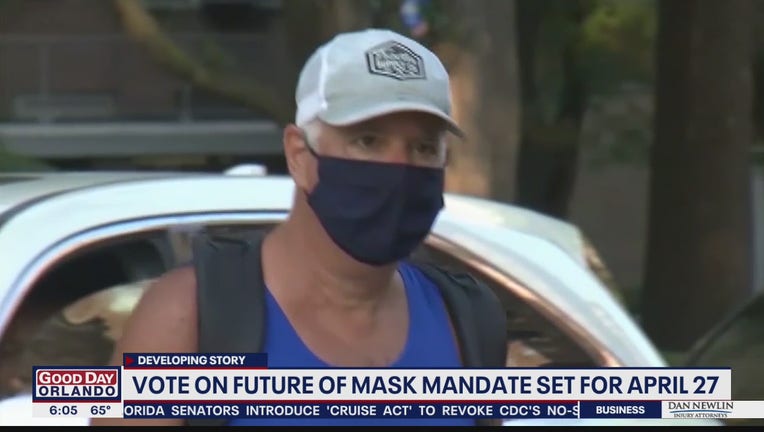 SEMINOLE COUNTY, Fla. - The debate over whether to wear a mask in Seminole County is heating up again after an argument during the Seminole County Commission meeting Tuesday morning.

The commission is expected to vote on whether to rescind the county’s mask mandate on April 27. If the vote is approved, wearing masks in the county would not be a requirement starting June 7.

During Tuesday’s meeting, Seminole County resident Gerald Martin refused to wear a mask despite a rule requiring one be worn inside commission chambers. When Commissioner Lee Constantine asked Martin to put on a mask, he refused again.

"Sir, I’ve asked you to put masks on," Constantine can be seen saying on video with his mask pulled down underneath his chin. Martin responded, "Sir, you’re putting me at risk. You don’t have a mask on."

Martin can be seen sitting in front of four people, one of which was also not wearing a mask. The disagreement continued with Martin saying it was a double-standard to require him to wear a mask.

"I wasn’t going to physically remove them because I think in part, that’s what some of them wanted," Commissioner Constantine said about the five people who debated with him about the mask mandate.

Commissioner Constantine said they will follow the mask mandate until there’s scientific data showing it is not needed anymore.

"We all want that, but also if we don’t do it, keep the masks on, get vaccinated, we’ll never get through this."

Commissioner Amy Lockhart said they need to look at the data and hopefully get rid of the mandate in June.

Some Seminole County residents said they are ready to see the mask mandate go away.

"If masks truly worked, then no one that wore a mask, would ever have gotten sick," Martin told commissioners during the meeting.

Kelly Chilson said, "There’s a growing amount of evidence that the masks are doing physical and psychological damage than they are preventing."