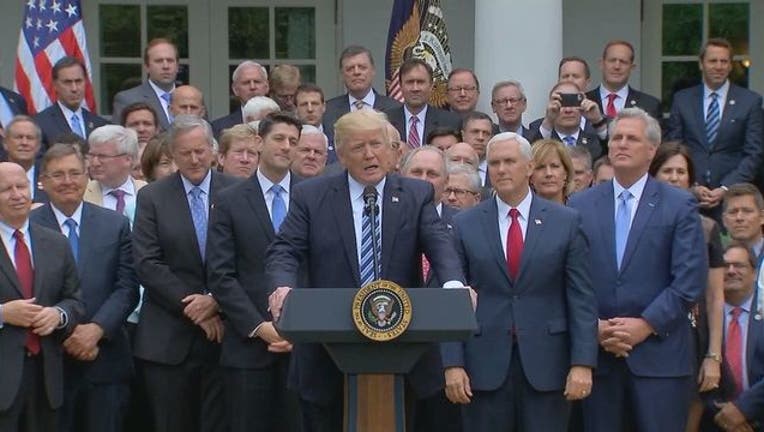 The liver-destroying disease hepatitis C made her ineligible for coverage until President Barack Obama's law barred insurers from denying people with a medical condition. She has since seen a specialist who helped get her bladder infections under control, and her insurance covered about $70,000 in prescription drugs to treat hepatitis C.

"I don't want to go back to the old way of doing things, worrying if I'm going to have the money to get my bladder infection treated," said the 46-year-old self-employed massage therapist from Austin, Texas.

Erin was among more than 20 million people in the United States who gained coverage under the health overhaul, which has pushed uninsured rates to historic lows over the past few years. The law also aims to improve health by getting the poor and newly insured back into regular care and away from sporadic clinic visits or expensive options such as emergency rooms.

Republican efforts to replace the law are expected to increase the number of uninsured and may derail the steady push to bring people back into the health care system, which many doctors and health policy researchers see as essential to reducing some costs and improving quality of life.

It seems simple to connect patients with a primary care doctor for preventive care such as flu shots or regular monitoring of diabetes and other chronic conditions, to prevent future expensive health costs. But that often means overcoming problems that include making it to the doctor, a mistrust of the health care system or language barriers just to get patients into the waiting room.

Experts say they're concerned about the number of uninsured possibly swelling again just as signs of progress are seen.

"The public shouldn't think magically that this is something that's going to turn on a dime because you've just given an adult who's spent 38 years without insurance (coverage) for the first time," said Dr. Jay Shannon, CEO of Chicago's Cook County Health & Hospitals System.

The GOP health plan that passed the House this month proposes cuts to the state-federal Medicaid program that covers the poor. That includes ending extra federal payments to 31 states that expanded Medicaid to cover more people. The measure would water down subsidies that have helped people buy people buy coverage on insurance exchanges.

A recent projection from the nonpartisan Congressional Budget Office estimated the House bill would result in 23 million additional people going without insurance in 2026.

Medicaid's expansion boosted the bottom line - and number of insured patients - at Cook County Health & Hospitals System, one of the nation's largest public health systems. In response, it has created teams of doctors, nurses and other medical staff to guide new Medicaid patients through the maze of primary care and connect them with specialists too.

The hospital system has seen a drop in emergency department visits tied to chronic illnesses like high blood pressure, diabetes or asthma since the ACA expanded coverage while overall visit levels have stayed the same.

Primary care practices around the United States are seeing an uptick in returning patients. About 40 percent of the 190,000 Medicaid patients new to practices monitored by the technology firm athenahealth have returned for four or more visits in 18 months after making an initial trip in 2014 or the first half of 2015.

Repeat visits are critical for doctors working with patients to better monitor chronic conditions or improve their overall health. By building a relationship, a doctor can monitor a diet plan or quickly spot changes in things such as blood pressure that may be a sign of an underlying problem.

"That's the biggest challenge in getting people to engage in care, is that building of trust," said Laurie Martin, a senior policy researcher at RAND Corp.

Insurers such as Medicaid specialist Molina Healthcare will call new customers to help them pick a primary care doctor for an initial visit. The insurer also works with patients to make sure they have transportation and reminds them of follow-up appointments or the need for screenings such as mammograms.

Others are working through insurance to draw into the health care system patients who don't speak English. Cover Missouri and International Institute provide free consultations in several languages to help people feel comfortable using their coverage. They've printed a fact sheet in 11 languages to walk consumers through basics like how to read an insurance card.

Even with insurance, many patients still face challenges accessing care. Some have to travel long distances to see a doctor, a big barrier if they don't have a car. People with low incomes also frequently change phone numbers, which makes it hard for a doctor's office to stay in touch, said Allison Madden, assistant vice president of care management at Community Health of South Florida.

The clinic helped Fay Laffitte receive regular diabetes care after she went uninsured for five years. The home health aide from Homestead, Florida, didn't have coverage through work and frequently skipped doctor appointments because she couldn't afford them. By the time the 57-year-old got insurance with the help of a subsidy, her blood sugar was out of control and she had to go on insulin.

She takes it twice a day and sees her doctor monthly to keep her disease in check. Laffitte says knowing she has the insurance is like breathing a sigh of relief.

"I don't have to worry about my health," she said. "I can afford to get the medicine and take it and be all right."