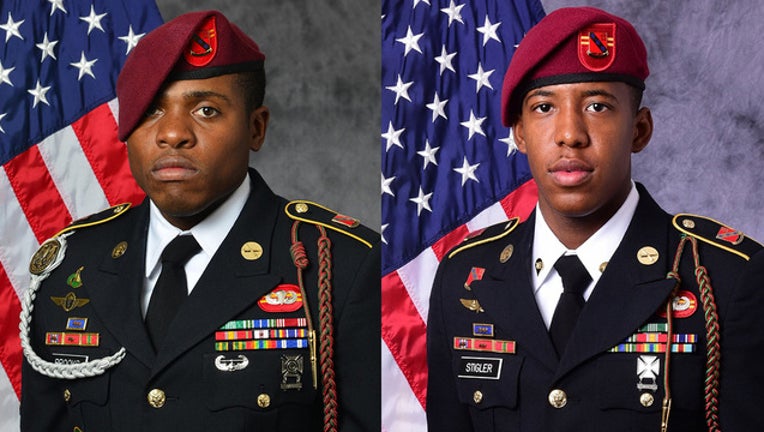 NEW YORK (FOX5NY) - Two U.S. soldiers died in Iraq in what the Pentagon is calling an artillery "mishap." One of the soldiers was from New York City.

Sgt. Roshain E. Brooks, 30, and Sgt. Allen L. Stigler Jr., 22, both paratroopers and cannon crew members, were firing on an ISIS target "when a mishap occurred" on August 13, 2017, Army Col. Rob Manning said, according to the AP.

Brooks, of Brooklyn, N.Y., and Stigler, of Arlington, Texas, were killed and five others were wounded, Manning said.

Col. Pat Work, the commander of the 2nd Brigade Combat Team, said in a statement that Brooks and Stigler were "courageous patriots" who served the U.S. coalition with "extraordinary commitment."

"Our team extends its most sincere condolences to their families and friends," Work said. "Their personal commitments to our campaign against ISIS were extraordinary and we are incredibly proud to have served with them."

New York Gov. Andrew Cuomo ordered flags on state government buildings to be flown at half-staff on Wednesday, August 16, in honor of Brooks.

"On behalf of all New Yorkers, I extend my deepest condolences to Sgt. Brooks' family, friends and fellow soldiers," Cuomo said in a statement. "His tragic loss is one deeply felt by the entire New York family and today we honor his bravery and his service to this nation and this great state."

Brooks joined the Army in 2012 and served in Afghanistan in 2014, the Army said. This was his first deployment to Iraq.

Stigler joined the Army in 2013 and was on his first combat deployment.

The Army is investigating the incident.