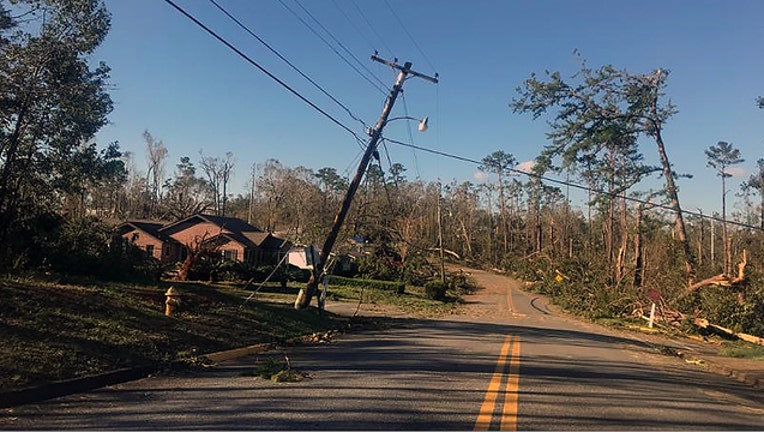 TALLAHASSEE, Fla. (NSF) - Gov. Ron DeSantis on Thursday signed a bill that could lead to more underground power lines in hurricane-vulnerable Florida and vetoed two measures that would have imposed health care-related fees.

The bill dealing with power lines (SB 796) came after millions of residents and businesses lost electricity in hurricanes during the past three years. State officials and utilities have long faced questions about why more power lines are not buried underground, where the lines could be less susceptible to punishing winds and falling trees.

While acknowledging the potential higher costs, supporters of the bill pointed to the economic damage done when electricity goes out for extended periods, such as after Hurricane Irma in 2017 and Hurricane Michael in 2018.

“This is what I do know, right now we spend billions of dollars every time the power goes out to get it back on,” House sponsor Randy Fine, R-Palm Bay, said near the end of the spring legislative session. “Those of you who lived through Irma remember we import hundreds, if not thousands, if not tens of thousands of people to come down here to get our utilities back on. That costs hundreds and hundreds of millions of dollars. To some degree, a lot of that goes away if we do this.”

Generally, utilities such as Florida Power & Light, Duke Energy Florida, Tampa Electric Co. and Gulf Power incorporate storm-hardening costs in their base electric rates, which are set for multiple years. The Florida Public Service Commission goes through months-long processes to determine base rates, looking at financial and technical issues that involve numerous parts of utility operations.

But the bill creates a separate Public Service Commission process that will allow utilities each year to seek to collect money from customers for storm-protection projects, such as building underground power lines. Commission staff members met this week with representatives of consumers and utilities to begin working on the process, in anticipation of the bill being signed.

The bill passed the Senate in a 39-1 vote and the House in a 110-3 vote. Nevertheless, it faced opposition during the session from the senior-advocacy group AARP Florida and the Florida Industrial Power Users Group, which represents large commercial electricity customers and is often involved in regulatory issues. They expressed concerns about the potential higher costs for consumers.

DeSantis’ office late Thursday released a list of four bills that he had signed and two he had vetoed. The moves brought to four the number of bills he has vetoed from the session that ended May 4.

With DeSantis saying his goal was to decrease health-care costs, the bills he vetoed Thursday would have authorized the state to levy fees to help support two new programs.

One of the measures (HB 7073) involved fees linked to an initiative to allow prescription drugs to be imported from Canada and other countries. The bill would have authorized the state to collect fees for two new types of permits: an international export pharmacy permit and an international drug wholesale distributor permit.

The Florida Board of Pharmacy has already started moving to create the international export pharmacy permit and has published an initial draft application that included a $255 fee.

DeSantis also vetoed a bill (HB 7067) that would have required the Department of Health’s medical licensure boards to charge a $150 registration fee for out-of-state health care professionals seeking to provide telehealth services to Florida residents.

The fee was passed because Florida law requires that the costs of regulating health-care practitioners must be borne by the people who receive licenses and licensure applicants. The bill also would have required a biennial renewal fee of $150 for out-of-state telehealth providers.

DeSantis has signed two bills (HB 19 and HB 23) that are aimed at importing prescription drugs and boosting the use of telehealth. While he was a supporter of those measures, DeSantis took issue with the permit fees.

“These pieces of legislation (HB 19 and HB 23) provide a framework for Floridians to access more affordable prescription medication and to utilize the services of physicians via a cheaper and more affordable convenient medium,” DeSantis wrote in his veto letter. “With this in mind, the imposition of fees would undercut these efforts and would likely make administering the programs more cumbersome.”

Legislators were forced to place the fees in separate bills because of a constitutional amendment that requires any fee or tax increase to be in stand-alone legislation.