Melbourne police offices say 40-year-old Richard Blose fled from officers in a stolen pickup. When they finally cornered him at a house in Cocoa, they said he stepped out from the truck totally naked. He didn’t put up a fight when officers arrested him.

MELBOURNE, Fla. - A man was arrested after police say he stole a pickup truck from a Melbourne dealership and then led officers on a pursuit.

Richard Blose, 40, is facing several charges including grand theft of a motor vehicle, criminal mischief, violation of probation, and driving with a suspended license.

Melbourne police officers say that when they finally cornered Blose at a house in Cocoa, he stepped out from the truck totally naked. He didn’t put up a fight when officers arrested him.

"You always hear about Florida; it's a very exciting. We'll just leave it at that. It's an exciting case and that's where it goes from there."

Investigators say it all started at Fiat of Melbourne, where surveillance cameras spotted Blose jumping the fence and going into the paint shop.

According to an arrest affidavit obtained by FOX 35 News, Blose was reportedly seen on security cameras around 5 a.m. wandering around the dealership and then sat on the roof of another vehicle for 30 minutes.  An employee later saw Blose him standing naked in a paint booth, the report states.  While there, police say Blose damaged a motorcycle and a pickup truck.  Then he got into a different pickup truck in the paint shop and drove away.

"He disappeared approximately 20 to 30 minutes after the incident occurred," Hill explains. "One of our lieutenants located the vehicle. That's when we worked with the Brevard County Sheriff's Office, got their helicopter up in the air."

The report states that the owner of the Ram was contacted, and they were able to track the truck going north on Intestate 95. Blose reportedly struck a guardrail several times before exiting the highway. He was eventually stopped and taken into custody. 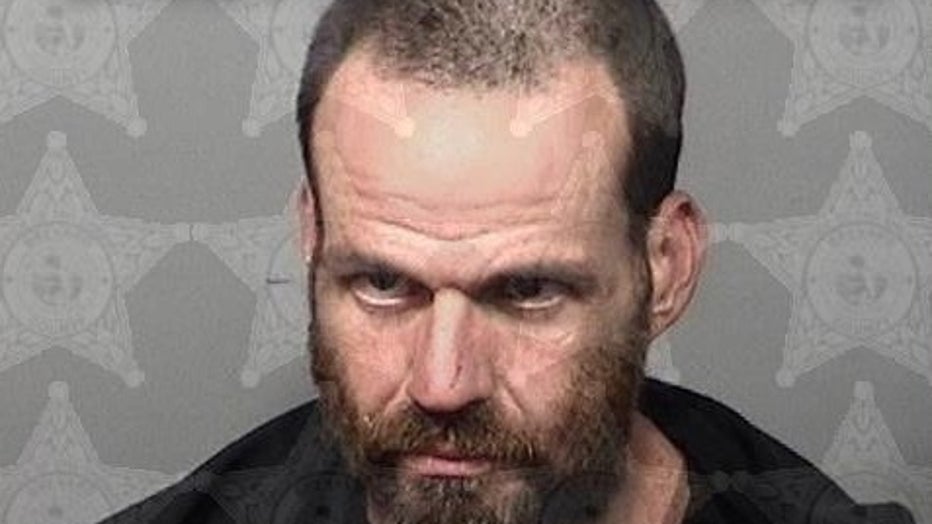 "I would say once he exited the vehicle, I believe they had multiple officers on-scene and making contact with him, announcing, 'We're the police department!' along with the sheriff's office," Hill says. "He understands that he was stopped."

During an interview with police, Blose reportedly said that he did not steal the truck and that someone in a red shirt told him he could take it.

Blose has a criminal history in Brevard County going back to 2018. Police say Blose was already out on probation when they arrested him in this incident.