Monday is the anniversary of the bloodiest election day in American history.

OCOEE, Fla. - Monday is the 100-year anniversary of the bloodiest election day in American history.

Descendants of the victims will walk through a new exhibition, called “Yesterday, This Was Home: The Ocoee Massacre of 1920," at the Orange County Regional History Center to commemorate the day. It is described as powerful, thought-provoking, and painful experience to walk through.

A ceremony was held prior to their visit.

“I can only imagine how they would feel today knowing that everything they endured is now being brought to light and to know that their truth is being told and acknowledged,” descendant of Ocoee Massacre victims Narisse Spicer said.

“As we continue our collective work towards justice, this hundred year remembrance serves as a reminder of the injustices that Black residents have endured in the United States and right here in Central Florida,” Orlando Mayor Buddy Dyer said.

He added, “To the descendants here today, I hope you can take solace in knowing that our community is honoring your ancestors by using this moment to recommit to the work to ensure that all residents are treated equally, are equally protected and have equitable opportunities."

Commemorating the Ocoee Massacre of 1920

Descendents of the victims in the Ocoee Massacre of 1920 commemorate its anniversary by walking through a new exhibit at the Orange County Regional History Center. 100 years ago today, an unknown number of African-Americans were killed in Ocoee after a Black man tried to legally vote.

On Election Day in 1920, an unknown number of African-Americans were killed in Ocoee after a Black man tried to legally vote. Among those murdered included Julius “July” Perry, a prominent, black landowner, who was lynched the next day, on November 3rd. The violence that took place on November 2nd and 3rd would become known as the Ocoee Massacre, the largest incident of voting day violence in U.S. history. 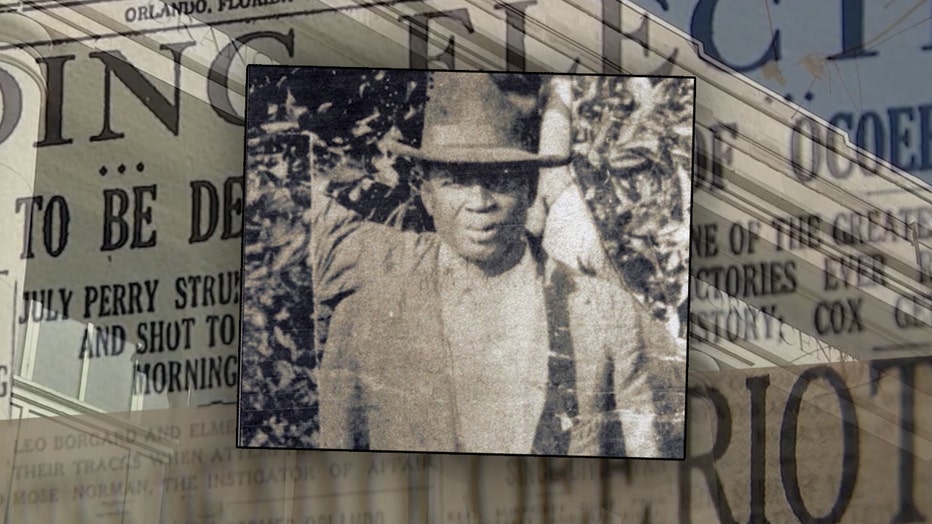 "The pain and the suffering, it's just really hard," she said. "Even though we were not physically there, but to playback in your mind and just to imagine what that exact day was like."

A new exhibit at the Orange County Regional History Center is now dedicated to helping people understand a tragedy that has been intentionally hidden.

"I don't love that it's the 100th-year mark and this is when we're doing this. This should've been done a long, long time ago," Pam Schwartz, the Chief Curator at the History Center, told FOX 35.

At the history center, people can see a document detailing how three black people burned to death during the massacre. There were not a lot of primary source documents to build the exhibit around though. So instead, there is a wall with 129 different accounts of the story and an interactive map showing the rise and fall of black land ownership before and after the massacre. Blacks were reportedly forced to sell land that is worth $10 million now.

"Like many of these events, there was intentional obfuscation. It's an act of white erasure trying to erase this history by the white community. Make sure records aren't kept. Making sure that records get altered or records go missing," Schwartz explained. "We're going to continue researching this event for a very long time and at the end of the day, we're still not going to know a lot of the facts." 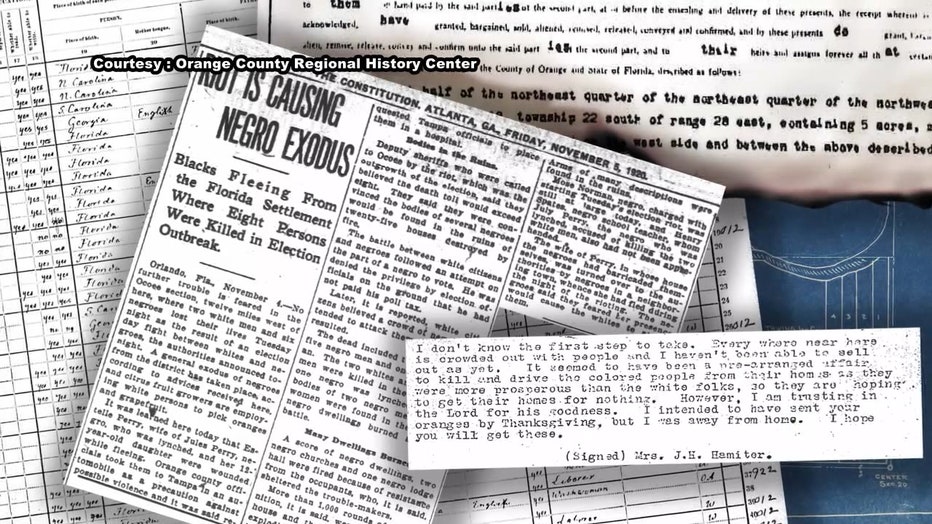 The exhibit covers everything from "the enslavement in the 1500s up to the Black Lives Matter movement today. Unfortunately, the same themes are really carried throughout this entire exhibit.”

Schwartz said her staff has spent hundreds of hours researching and tracing the genealogy of the descendants. She told FOX 35 that "we’re going to continue researching this event for a very long time and at the end of the day we’re still not going to know a lot of the facts.”

McWhite hopes that the exhibit serves as an educational tool to move us forward.

The exhibition is on display until February 14th, 2021. The History Center is practicing social distancing and is extending its hours so people can safely see this exhibit. If you wear your 'I voted' sticker on Election Day, you get free admission.