Ministry of the heart brings comfort to AdventHealth patients

It all started in a craft aisle and kept growing from there. Former AdventHealth employee Jim Stella started writing scriptures on wooden hearts for patients. It's a small gesture with a big impact

ORLANDO, Fla. - It all started in a craft aisle.

"She said, ‘Why don’t you do something with this as a ministry at the hospital?’ and I said, ‘What am I going to do? It’s a bag of hearts,’" Jim Stella, a former AdventHealth employee, said.

It kept growing from there.

"People just started picking them up and some of the people actually had tears in their eyes. They were very kind, and they said, ‘can I have one?’"

Stella started writing scriptures on these wooden hearts for patients. He first started by making 30 and dropped them off at AdventHealth Cancer Institute.

"Just to see if somebody takes it and get some encouragement. They’re going to come in there and have chemo and radiation… going through a tough time," Stella said. 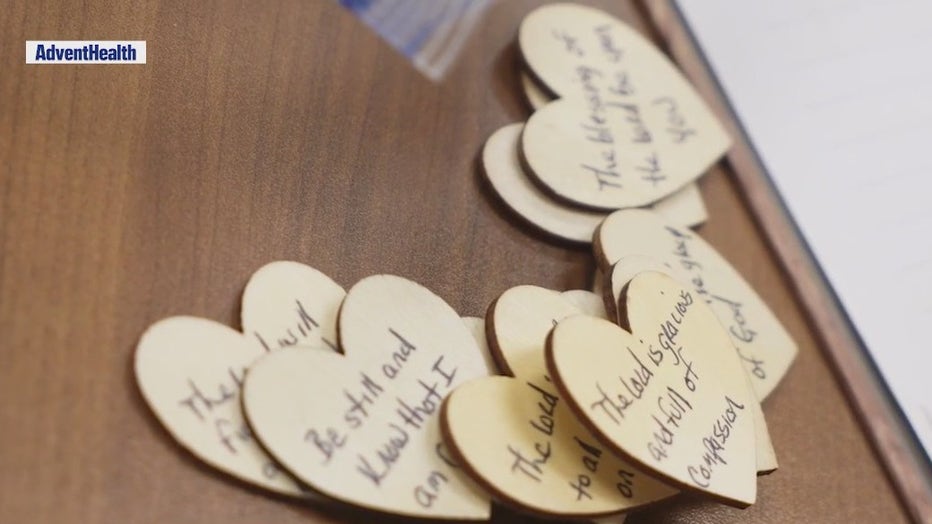 Those 30 were gone the next day, and hundreds more were gone in the next two weeks. People even started requesting scriptures. Eventually, a group of volunteers joined him to keep up with demand. They write hundreds of hearts every week, and they’ve gotten more than 80,000 in a little more than a year.

"It’s really been very emotional for me," Stella added.

It's a small gesture with a big impact, when people need it most.

"Nobody wants to be in the hospital. Nobody walks in and says ‘I want to be here today.’ So prayer is needed."