Chinese McDonald's Installs Bikes for Customers to Pedal While Dining

A Shanghai McDonald’s restaurant installed bicycle seats for customers to pedal away while dining in at the fast-food outlet. (Credit: 泡椒辣叔/Uncle Pickle via Storyful)

McDonald’s is testing out a new item not on its menu but available to dine-in customers: exercise bikes.

The corporation confirmed to FOX Television Stations that it’s trying out "The Green Charging Bike" at two locations in China. The Jieyang Wanda restaurant in Guangdong Province rolled out the bikes in September 2021. The New Hualian restaurant location in Shanghai followed suit.

The company said it will continue to solicit feedback from customers before expanding the program to other cities. 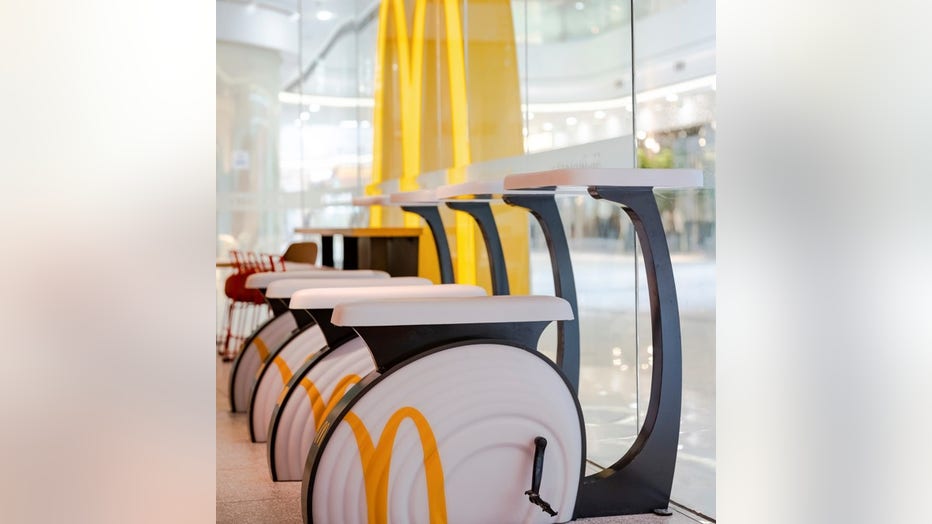 McDonald's has rolled out exercise bikes at two locations in China that can be used to charge electronic devices while customers eat. (Credit: McDonald's)

McDonald’s has aimed to provide customers with healthier options over the years.

In 2018, the fast-food chain took cheeseburgers and chocolate milk off its Happy Meal menu in an effort to cut down on the calories, sodium, saturated fat and sugar that kids consume at its restaurants.

The Happy Meal, which has been around for nearly 40 years, has long been a target of health advocates and parents who link it to childhood obesity. McDonald’s has made many tweaks over the years, including cutting the size of its fries and adding fruit. Most recently, it swapped out its apple juice for one that has less sugar.

McDonald's employee turns 100 years old with no plans on retiring

Ruth Shuster celebrated her 100th birthday Wednesday, and she said retiring from her job at McDonald’s isn’t even on her radar.

In 2019, McDonald’s started selling the PLT, or the plant, lettuce and tomato burger. McDonald’s said it developed the special recipe using burgers from Beyond Meat, a California-based startup that makes "meat" from pea protein, canola oil, beet juice and other ingredients.