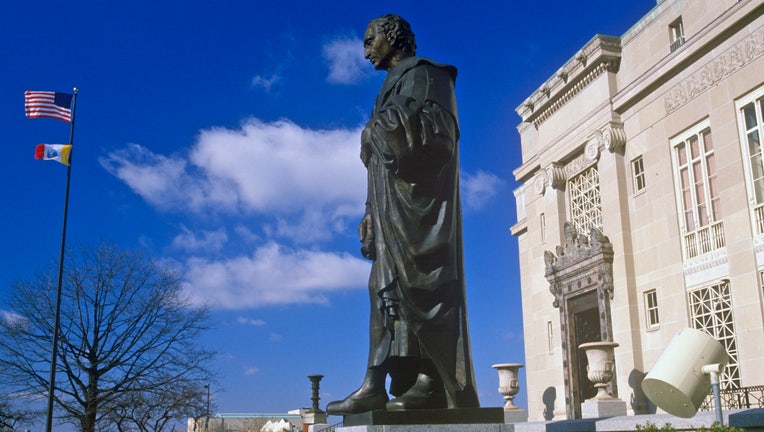 COLUMBUS, Ohio - The mayor of Columbus, Ohio, announced Thursday the city plans to remove the Christopher Columbus statue that stands in front of City Hall in favor of “diversity and inclusion.”

The statue will be replaced with a piece of new art that better represents the city and its people,  FOX 28 in Columbus reported.

“For many people in our community, the statue represents patriarchy, oppression and divisiveness. That does not represent our great city, and we will no longer live in the shadow of our ugly past,” Mayor Andrew J. Ginther said. “Now is the right time to replace this statue with artwork that demonstrates our enduring fight to end racism and celebrate the themes of diversity and inclusion.”

He said the statue’s removal will take away “one more barrier to meaningful and lasting change to end systemic racism.”

Columbus statues across the country have become targets of anger and vandalism during Black Lives Matter protests in the wake of George Floyd’s police custody death in Minneapolis last month.

Protesters have torn some statues down and some have been officially removed.

The statue in front of Columbus’ City Hall had the word “rapist” spray-painted on it by protesters on Wednesday, FOX 28 reported.

Statues of controversial historical figures have become a flashpoint amid protests, especially Confederate monuments that dot the South.

Critics of tributes to Columbus cite the fact Columbus enslaved Native Americans and played a part in introducing European diseases that Native Americans were not immune to into the New World, devastating populations.

The Columbus City Council in a statement expressed its “sincere respect and thanks" to the city of Genoa, Italy, which gifted the statue in 1955.

The Columbus Piave Club, however, said it found the sentiments of diversity and inclusion “ironic,” saying the club, which celebrates Italian heritage, had been “COMPLETELY locked out” of the conversation surrounding the statue’s removal.

"We as an Italian Community (Columbus Italian Club and Abruzzi Club included) have been COMPLETELY locked out of this conversation and completely ignored considering we facilitated the statue’s acquisition, delivery, and dedication in 1955,” the club said in a statement. “Furthermore, considering that we celebrate the anniversary of its unveiling every year on the site since 1955 and are not even given the courtesy of a mention in the press release of its removal.”

The statement said the club had contributed thousands of dollars for the statue’s upkeep over the years but were “denied the dignity of inclusion in its demise.”

“From an administration that preaches inclusion and diversity, we as a community find this extremely ironic," the statement said.

The statue will be placed in storage until the city can decide where to place it and how best to use it to educate people about where it fits into the city's history.