BRAINTREE, Mass. - Mary Pratt, a trailblazing athlete who played in the All-American Girls Professional Baseball League which inspired the iconic sports movie, “A League of Their Own,” has died. She was 101.

She passed away peacefully on May 6 at a nursing home, her nephew, Walter Pratt, told The Patriot Ledger.

Pratt pitched in the women's league from 1943-47, playing for both the Rockford Peaches and Kenosha Comets. She was believed to be the last surviving member of the original 1943 Peaches. 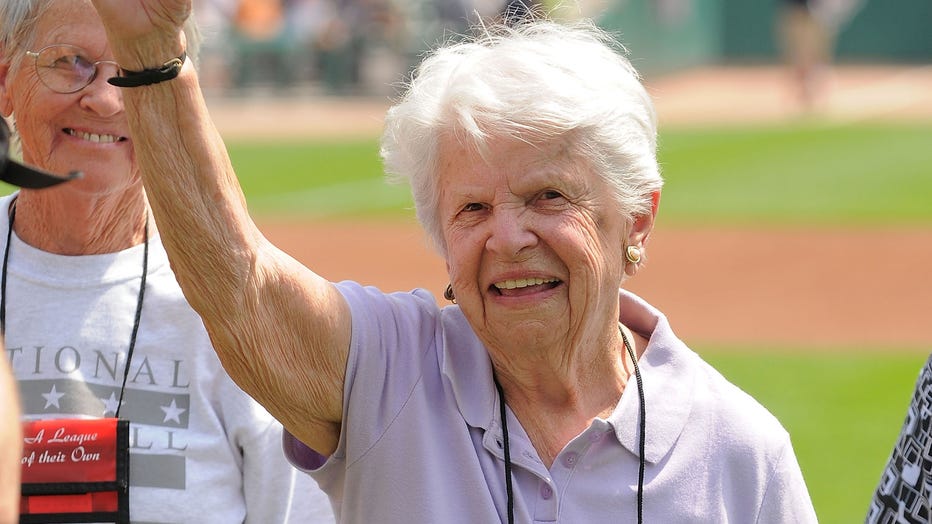 Former member of the All-American Girls Professional Baseball League (AAGPBL) Mary Pratt waves to the crowd during a reunion ceremony before the game between the Detroit Tigers and the Chicago White Sox at Comerica Park on Aug. 5, 2010 in Detroit, Mi

The league was profiled in the 1992 sports comedy “A League of Their Own,” directed by Penny Marshall and starring Tom Hanks, Geena Davis, Madonna and Rosie O’Donnell, and tells the story of the all-female professional baseball league started in the Midwest during World War II.

"We are terribly sad to report that former Rockford Peaches and Kenosha Comets pitcher, Mary Pratt passed away on May 6th. She was 101 years old. Mary was the last known original Peaches player that played on the 1943 team,'' the AAGPBL tweeted. "Her stories, her energy will be missed for a long time."

Pratt also taught physical education for 46 years. The Bridgeport, Connecticut, native was a coach and referee in several sports.

She was a multi-sport athlete who participated in basketball, softball, fistball, volleyball, lacrosse, field hockey, sailing, tennis and archery while at Sargent College, a part of Boston University.

“Mary Pratt had one problem when she attended Sargent College. She was only allowed to participate in one sport at a time,” the university states in a biography about the late athlete.

She was inducted into both the Boston University Hall of Fame and Boston Garden Hall of Fame.