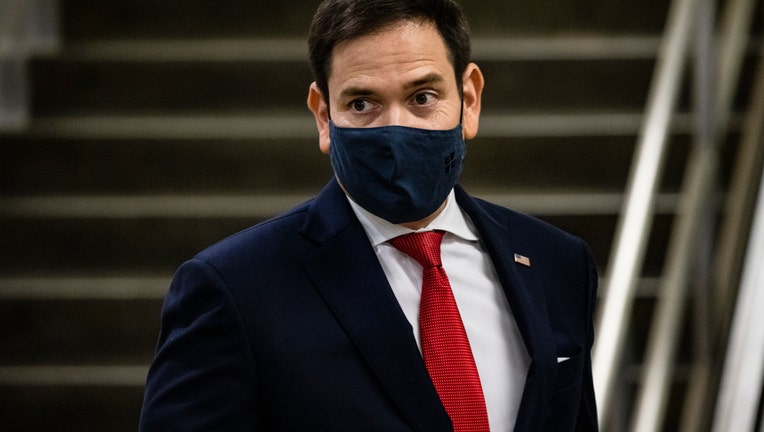 Senator Marco Rubio (R-FL) walks through the Senate subway following a vote in the Senate at the U.S. Capitol on November 12, 2020 in Washington, DC. As President Trump continues to refuse to concede the Presidential Election to President-elect Joe B

The House on Monday passed a measure in the $900 billion COVID-19 relief package that President Trump signed on Sunday night to give Americans making up to $75,000 direct payments of $2,000 – rather than an initial proposal of $600 – but it is unclear whether the Senate will vote to do the same.

"I agree with the [p]resident that millions of working-class families are in dire need of additional relief, which is why I support $2,000 in direct payments to Americans struggling due to the pandemic," Rubio said in a Monday statement.

Rubio went on to blame Democrats for rejecting Republican attempts to "pass additional relief for workers, families, and small businesses...at every turn."

He continued: "I share many of my colleagues’ concern about the long-term effects of additional spending, but we cannot ignore the fact that millions of working-class families across the nation are still in dire need of relief. Congress should quickly pass legislation to increase direct payments to Americans to $2,000."

It is now up to the Senate to vote on the measure that Trump has been pushing for since last week, though Senate Majority Leader Mitch McConnell has not publicly stated how he plans to address the issue.

Rubio will also introduce legislation to amend Section 230 of the Communications Decency Act so that it continues to protect small businesses and companies that promote free speech on the Internet but takes away "immunity" for certain Big Tech platforms that moderate certain content, according to a press release.

"I also stand ready to work with my colleagues to make much-needed changes to Section 230 and take steps to ensure the American people can once again have confidence in our elections," Rubio said.

President Trump last week vetoed the $740 billion National Defense Authorization Act for Fiscal Year 2021 after warning he would do so if it didn’t repeal Section 230. The House on Monday voted to override the veto.