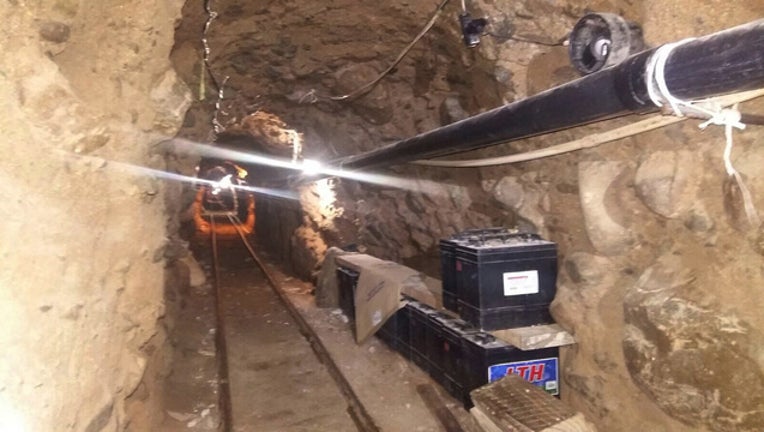 SAN DIEGO (AP) — Authorities seized 12 tons of marijuana and arrested 22 people after discovering one of the longest cross-border tunnels between the U.S. and Mexico, officials said Thursday.

The passage connecting warehouses in San Diego and Tijuana, Mexico, was about 2,400 feet long and 30 feet deep. It was lit, ventilated and equipped with a rail system — hallmarks of the most sophisticated tunnels found along the border.

Near-simultaneous police stings on Wednesday resulted in six arrests in San Diego and 16 in Mexico. Authorities recovered two tons of marijuana in the U.S. and 10 tons in Mexico.

U.S. authorities said smugglers tried to move the first load of drugs through the tunnel on Wednesday but that nothing got through undetected.

The sting came after an undercover agent for U.S. Homeland Security Investigations agreed to provide the drug smugglers with drivers and use of a warehouse in exchange for a $10,000 payment for each truckload of drugs moved, according to a probable cause statement.

The discovery demonstrates the enduring appeal of tunnels to smugglers, despite the significant time and money required to build one. Dozens of tunnels have been found along the U.S.-Mexico border in recent years, some equipped with hydraulic lifts and electric rail cars.

"We see a super tunnel open for business once every year or so," said U.S. Attorney Laura Duffy. "Just when they think they're ready to move, we put it out of business. We continue to make good on our promise to relentlessly pursue and shut down any tunnel as soon as it opens."

The San Diego-Tijuana region is popular because its clay-like soil is relatively easy to dig with shovels and pneumatic tools, and both sides of the border have warehouses that provide cover for trucks and heavy equipment.

It was unclear which drug trafficking organization orchestrated the latest passage but the region is largely controlled by Mexico's Sinaloa cartel, whose leader Joaquin "El Chapo" Guzman escaped from a maximum-security prison in Mexico in July through an elaborate tunnel.

Mexican federal police said in a news release that those arrested on suspicion of drug trafficking told authorities that they had ties to a criminal group that operates in the state of Jalisco — an apparent reference to the Jalisco New Generation cartel, which controls that part of western Mexico.

The Mexican suspects were caught off-guard when authorities arrived at the Tijuana warehouse with a search warrant, police said. No shots were fired.

The drugs found were wrapped in 873 packages covered with plastic and tape.

On the U.S. side, the tunnel entry point in a warehouse near the Otay Mesa border crossing had no stairs or ladder. Duffy said smugglers were believed to be using pulleys.

Dave Shaw, head of Homeland Security Investigations in San Diego, said traffic to and from the San Diego warehouse was unusually heavy before the sting. The agency began investigating in May, he said.

"It almost looked like they filled it with junk to look like they were busy," Shaw said.

Isaias Enriquez, 53, and Isidro Silva, 27, both of Tijuana, were charged with conspiracy in U.S. federal court. Four others were to be charged in state court.

Enriquez agreed in recorded conversations to pay the undercover agent $10,000 a truckload to provide a second warehouse and drivers, according to the probable cause statement. Drugs were to go there from the warehouse on the border in San Diego.

Two agents unloaded boxes containing 249 packages of pot at the second warehouse on Wednesday, and one met later with Enriquez and Silva at a San Diego restaurant to arrange another shipment, the document said.