Matt Newcombe and Kelly Whiting Newcombe's wedding photo shoot was anything but traditional, and it went viral after their photo shoot session alongside I-17 was captured by ADOT cameras. FOX 10's Justin Lum caught up with the couple.

PHOENIX - ADOT cameras have captured police situations, crashes and car fires on a regular basis, but on Sept. 6, one of the cameras captured something rather unusual taking place on a Phoenix area freeway.

According to a tweet made by ADOT officials, their cameras captured a wedding photo shoot in progress.

"This is one of the nicest situations we've ever seen on the side of the road!" read a portion of the tweet.

According to ADOT officials, the photo shoot took place on a portion of I-17 in the North Valley. The woman was seen wearing a wedding gown as a photographer took photos of her. Officials also say they have a network of more than 400 cameras statewide, with the majority of them placed along major freeways in Phoenix and Tucson.

Couple captured on camera talks about their photo shoot 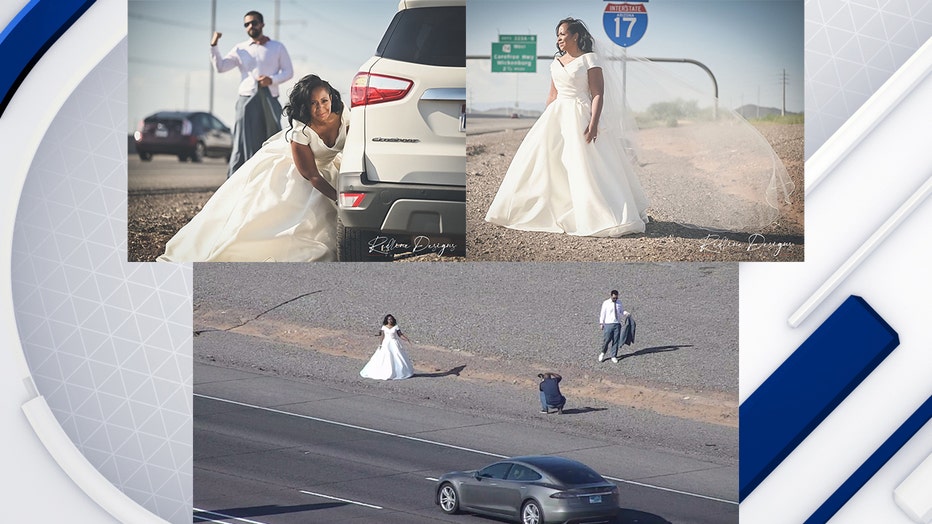 On Sept. 7, the bride and groom in the now-viral photo talked about their decision to take their wedding photos on the side of a Phoenix freeway.

"Somebody comes up like, ‘hey! I know you guys! I’ve seen you!’ and we’re like ‘where?’ And he's like, on the side of the road!" said the groom, Matt Newcombe.

"We saw it said ‘Carefree Highway,’ and it was like, 'ya know, we just got married. Carefree life, carefree living," said the bride, Kelly Whiting Newcombe.

Matt and Kelly live in New York, but they needed to do the wedding in Arizona. Kelly's father lives in the Valley, and after Kelly got engaged, she found out her father had stage IV bone cancer. The wedding, planned in less than three months, was held in Paradise Valley, and Kelly said she had to make sure her father witnessed it all.

"I'm the only girl in the family. I have three brothers, and so, it’s kind of a big deal getting married and having my father walk me down the aisle," said Kelly.

Besides the traditional wedding photos that are taken at the venue, the couple also opted for photos taken at rather unconventional places. Besides the I-17, they climbed a mountainside on Sept. 6, in their wedding gown and suit. In addition, they took photos at a Valley Metro station, as well as a bowling alley.

"My suit, her dress, it’s a one time thing, and it was great for us too. We invested a lot of time and energy into this, so we wanted to make the most of it," said Matt.

"You only have one life to live, right? So, I would just say go for it. You see something, you wanna be creative? Let it go," said Kelly.

Meanwhile, in the ADOT tweet that went viral, officials reminded members of the public to not pull over on a freeway unless it's an emergency.

"We absolutely appreciate and respect that reminder," said Kelly, who went on to say they made sure to stay off the shoulder.

Both Matt and Kelly say they will try the same photography adventure with the suit and wedding dress in New York City, when they return home.