An Orlando entrepreneur is trying to protect homes and businesses from hurricanes. John D. Smith is the creator of a window and door covering he calls Storm Stoppers. It’s a thick, corrugated plastic meant as an alternative to plywood.

ORLANDO, Fla. - An Orlando entrepreneur is trying to protect homes and businesses from hurricanes.

John D. Smith is the creator of a window and door covering he calls Storm Stoppers.  It’s a thick, corrugated plastic meant as an alternative to plywood.

"Back in 2004, I was in a business that made signs, so I had a lot of this eighth-inch thick material. That was back in Hurricane Charley and you couldn’t get plywood, so I just used what I had, and it worked," he explained.

He tested the material against 143-mile-an-hour winds in a hurricane simulator and tried it out against projectiles to see how it would hold up against debris being flung around in storms.

"My first testing lab was a batting cage. Where do you go for high-impact missiles? And it worked – balls bounced off," said Smith, adding that the plywood people normally use to board up their homes does not hold up against winds that strong or projectiles that forceful.

Instead of using screws or nails, Storm Stoppers attach with 3M Dual Lock fasteners. Those are similar to Velcro Command Strips but much stronger. Ben Harlan was the very first Storm Stoppers customer, back in 2004. 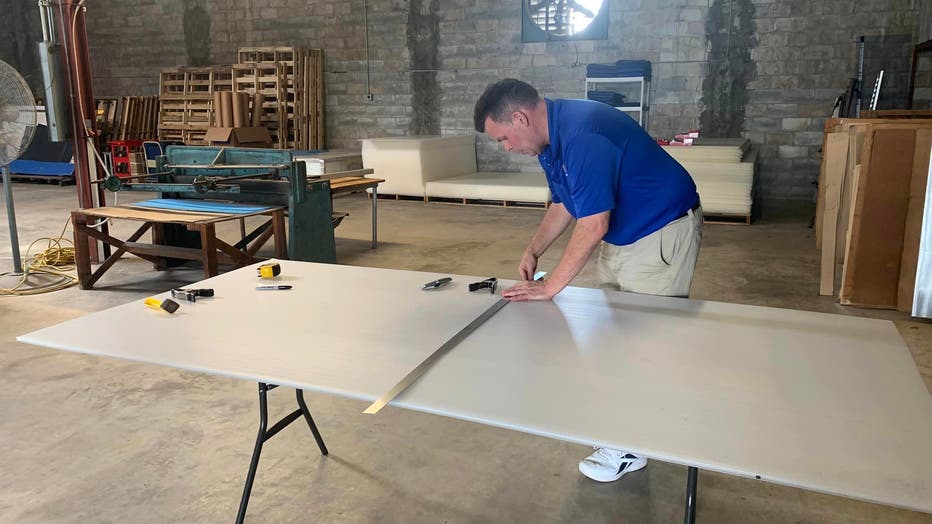 John D. Smith, creator of Storm Stoppers, measures out a piece of his material to cut for a demonstration

He explained, he was working as a firefighter at the time and made the investment after accidentally locking his family inside the house during a hurricane.

"I put plywood up, and I bolted it on. I was at work and my wife and I would talk until the phone went dead. Charlie hit, I didn’t know how they were. They had only one way out, through the garage. But the power was off," explained Harlan.

He says the product has protected his home through every storm since then, without ever needing to be replaced.

Plus, he likes how easily the panels go on and come off. He doesn’t have to worry about boarding his family up inside in a way that traps them there.

A four-by-eight, half-inch-thick piece of plywood weighs about 45 pounds. Storm Stoppers material in that same size weighs closer to 12.

It’s also much easier to cut through. Rather than using a circular saw, you’re able to use a box cutter with moderate pressure that gets through in two slices.

It's easy enough to install that Harlan, who’s in his 70s, is able to do it himself.