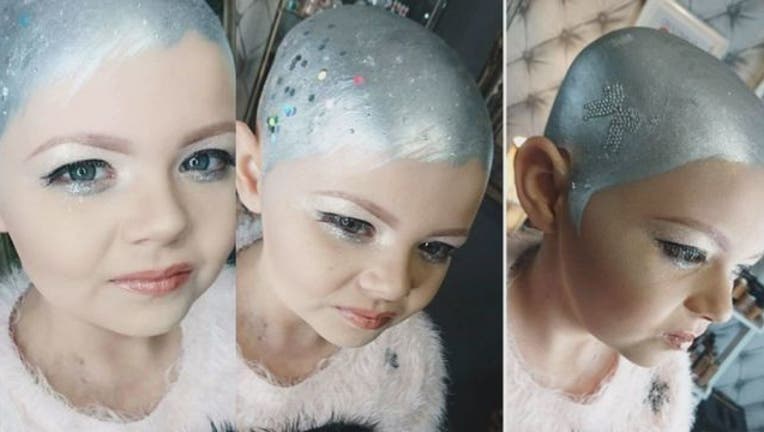 An 8-year-old cancer patient recreated Cara Delevinge’s dazzling Met Gala look and is proving that bald girls do it better.

“If you can’t have hair, have glitter and diamonds,” wrote @brooklynisourhero in the Instagram post that’s melting social media’s heart. And as the saying goes, “Diamonds are a girl’s best friend.”

Brooklyn’s best friend Holly, who helps run the @brooklynisourhero account, told FOX 5 the girls had an upcoming charity event to help raise money for Brooklyn. Make-up artist Fione Coombes got wind of the event and reached out to help.

Coombes told FOX 5, "I heard about the fundraiser they were having, and offered to donate a Glamsquad Makeover as a raffle prize."

What struck a cord for Coombes was Brooklyn's dream to become a make-up artist one day. She also noticed how dedicated Holly was to helping spread word of her best friend's fundraiser. So she offered to give the girls a free make over for the big night.

Brooklyn, unsure of what she wanted -- so long as it had glitter-- let Coombes work her magic. The finished look mirrored Cara’s chromed out canvass-- and it was magical!

When in doubt, bling it out! Just like the little girl who lost her hair from Alopecia and celebrated "Crazy Hair Day" at school with sparkle.

The actress reposted Brooklyn’s picture on her personal Instagram account, which has over 40 million followers, and called the young cancer patient her hero.

To date, the post has over 800,000 likes and thousands of positive comments.

Brooklyn is a hero of the people and bald beauties everywhere! We're sending her lots of love to help kick cancer in the butt.