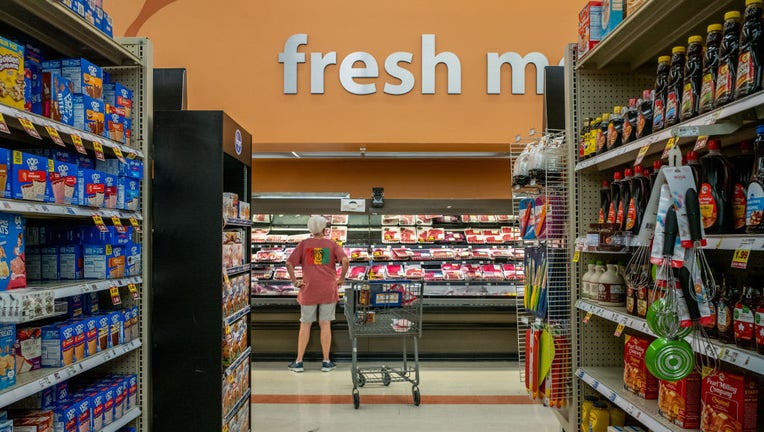 FILE - A customer shops in a Kroger grocery store on July 15, 2022, in Houston, Texas. (Photo by Brandon Bell/Getty Images)

Two of the nation's largest grocers have agreed to merge in a deal they say would help them better compete with Walmart, Amazon and other major companies that have stepped into the grocery business.

Kroger on Friday bid $20 billion for Albertsons, or $34.10 per share. Kroger will also assume $4.7 billion of Albertsons' debt.

Kroger Chairman and CEO Rodney McMullen, who would retain those titles at the combined company, said the combination could save $1 billion annually in lower administrative costs, more efficient manufacturing and distribution, and shared investments in technology. He said the company would plow those savings back into lower prices, higher wages and improved stores.

"We will take the learnings from each company to bring greater value and a better experience to more customers, more associates, and more communities," McMullen said Friday in a conference call with investors.

Shares of Kroger Co. lost 7.3% Friday, while those of Albertsons Cos. closed 8.3% lower.

The deal will likely get heavy scrutiny from U.S. antitrust regulators, especially at a time of high food price inflation. The Justice Department and the Federal Trade Commission were already in the process of updating merger guidelines to better detect and prevent anticompetitive deals. In July, President Joe Biden signed an executive order promoting competition in business and calling for tougher scrutiny of mergers.

If approved by regulators, the deal is expected to close in early 2024.

To ease the regulatory process, Kroger and Albertsons said would divest stores in markets where they overlap. The companies said they would spin off up to 375 Albertsons stores in a standalone public company.

"We are confident, from the extensive work that we’ve done, that we have a clear path to achieve regulatory approval with divestitures," Kroger Chief Financial Officer Gary Millerchip said.

McMullen said the company would decide market-by-market whether stores would change their names.

"We'll want to evaluate each market individually, who has the stronger market share," he said.

Together, the stores would control around 13% of the U.S. grocery market, assuming the sale or closure of around 400 stores for antitrust reasons, according to J.P. Morgan analyst Ken Goldman.

Still, that is a distant second to Walmart's 22% share. Amazon, which bought Whole Foods in 2017, is also a growing player in the space, with 3% share. Warehouse store Costco controls 6%.

Value chains like Aldi and Dollar General __ which have a combined 4% market share __ have also been squeezing traditional grocers like Kroger and Albertsons, particularly as red-hot inflation pushes people to cut costs.

Kroger said the combined stores also would provide greater and faster access to fresh food, with a total of 66 distribution centers and 52 manufacturing plants. Together, the stores operate in 48 states and the District of Columbia.

Kroger said it would reinvest about $500 million into price reductions. It would also spend $1.3 billion updating Albertsons stores and $1 billion on higher employee wages and improved benefits.

Some grocery workers expressed concern about the plan, which would inevitably bring store closures. The majority of Kroger's hourly workers are unionized with the United Food and Commercial Workers union, which also represents workers at Albertsons-owned Safeway.

"The proposed merger of these two grocery giants is devastating for workers and consumers alike and must be stopped," said Kim Cordova, president of UFCW Local 7, which represents 6,320 Safeway workers in Colorado and Wyoming.

Three miles from the union's headquarters in Pueblo, Colorado, a Safeway sits right across the street from a King Soopers, which is owned by Kroger.

It was no secret that Albertsons was thinking about selling the company. The chain announced in February that its board was reviewing options to enhance shareholder value, including developing new businesses or a sale.

And both Albertsons and Kroger themselves have grown into huge operations partially through acquisitions.

Albertsons was bought by a consortium of investors including Cerberus Capital Management, a private equity firm, in 2006. Cerberus helped finance Albertsons’ 2015 purchase of the Safeway chain and attempted a failed merger with Rite Aid in 2018. Albertsons became a publicly traded company in 2020.

But Saunders said Albertsons allows Kroger to expand into markets where it has less presence, like Nevada, Oregon and Washington.