Judge Ketanji Brown Jackson tells senators she would defend the Constitution and decide cases "without fear or favor" if she is confirmed to the Supreme Court.

Earlier on Monday, the panel was deadlocked, 11-11, on whether to send Jackson’s nomination to the Senate floor, but Republican Sens. Lisa Murkowski and Mitt Romney announced Monday night they will vote to confirm Jackson’s historic elevation to the Supreme Court. The extra votes gave President Joe Biden's nominee a burst of bipartisan support and all but assuring she'll become the first Black female justice.

The senators from Alaska and Utah announced their decisions ahead of a procedural vote to advance the nomination and as Democrats pressed to confirm Jackson by the end of the week. GOP Sen. Susan Collins of Maine announced last week that she would back Jackson.

All three Republicans said they did not expect to agree with all of Jackson's decisions, but that they found her well qualified. Romney said she "more than meets the standard of excellence and integrity."

With three Republicans supporting her in the 50-50 split Senate, Jackson is on a glidepath to confirmation and on the brink of making history as the third Black justice and only the sixth woman in the court’s more than 200-year history. Beyond the historic element, Democrats have cited her deep experience in nine years on the federal bench and the chance for her to become the first former public defender on the court.

Jackson previously faced more than 30 hours of hearings and interrogation over her record last month. Democrats — and at least one Republican — have cited her deep experience in her nine years on the federal bench and the chance for her to become the first former public defender on the court. 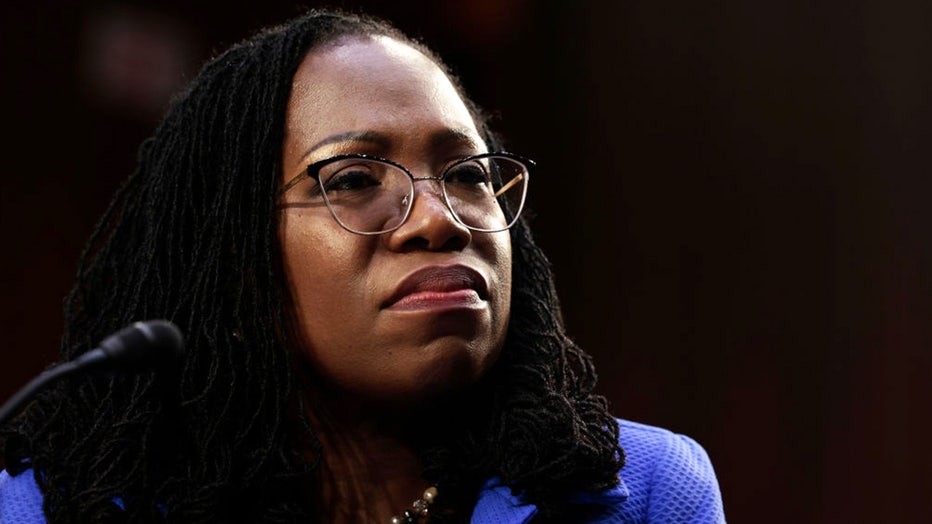 The chairman of the Judiciary Committee, Sen. Dick Durbin, D-Ill., said as he opened Monday’s meeting that Jackson has "the highest level of skill, integrity, civility and grace."

"This committee’s action today in nothing less than making history," Durbin said. "I’m honored to be a part of it. I will strongly and proudly support Judge Jackson’s nomination."

The Senate panel’s top Republican, Iowa Sen. Chuck Grassley, said he was opposing Jackson’s nomination because "she and I have fundamental, different views on the role of judges and the role that they should play in our system of government."

Republican Sen. Lindsey Graham also said he wouldn’t vote for Jackson, expressing concerns about her record despite supporting her confirmation as an appeals court judge last year. The South Carolina senator’s announcement had been expected after he criticized Jackson during her four days of confirmation hearings.

In a speech on the Senate floor, Graham said his decision was based partly on what he sees as a "flawed sentencing methodology regarding child pornography cases," echoing a line of questioning by some Republicans on the Senate Judiciary Committee. Several senators, some eyeing a run for president, repeatedly asked her about her sentencing decisions in her nine years as a federal judge in an effort to paint her as too lenient on sex criminals.

It was unclear so far whether any other Republicans would join Collins. Senate Republican leader Mitch McConnell of Kentucky set the tone for the party last week when he said he "cannot and will not" support Jackson, citing GOP concerns raised in the hearing about her sentencing record and her support from liberal advocacy groups.

Republicans on the Judiciary panel continued their push Monday to paint Jackson as soft on crime, defending their repeated questions about her sentencing on sex crimes.

"Questions are not attacks," said Marsha Blackburn of Tennessee, one of several GOP senators on the panel who hammered the point in the hearings two weeks ago.

Jackson pushed back at that time, declaring that "nothing could be further from the truth."

Legal experts praised Judge Ketanji Brown Jackson in her final day of Senate hearings, with a top lawyers' group saying its review found she has a "sterling" reputation, "exceptional" competence and is well qualified to sit on the Supreme Court.

Democrats are hoping to win bipartisan votes for President Joe Biden's historic nominee, but Republicans have portrayed Jackson as soft on crime in her nine years on the federal bench. Jackson, supported by committee Democrats, pushed back on that GOP narrative in more than 22 hours of questioning, explaining the sentencing process in detail and telling them: "nothing could be further from the truth."

Jackson declared she would rule "from a position of neutrality" on the high court during the second day of confirmation hearings before the Senate Judiciary Committee. The hearings included Republican suggestions that she has given light sentences to child pornographers.

Responding to Sen. Dick Durbin, the Judiciary Committee chairman who preemptively brought up concerns previously raised by Sen. Josh Hawley, R-Mo., Jackson pushed back on the notion that her rulings could have endangered children.

"As a mother and a judge who has had to deal with these cases, I was thinking that nothing could be further from the truth," Jackson said, calling it "some of the most difficult cases that a judge has to deal with."

She described looking into the eyes of defendants and explaining the lifelong effects on victims. It is "is important to me to represent that the children’s voices are represented," she said.

Judge Ketanji Brown Jackson was confirmed in 2021 to the D.C.-based appellate court as a U.S. Circuit Judge, a position Biden elevated her to from her previous job as a federal trial court judge. Three current justices — Thomas, Kavanaugh and John Roberts, the chief justice — previously served on the same appeals court.

Jackson was confirmed to the appeals court by a 53-44 vote in June 2021, winning the backing of three Republicans: Graham, Collins and Alaska’s Lisa Murkowski.

RELATED: Ketanji Brown Jackson to be nominated for Supreme Court