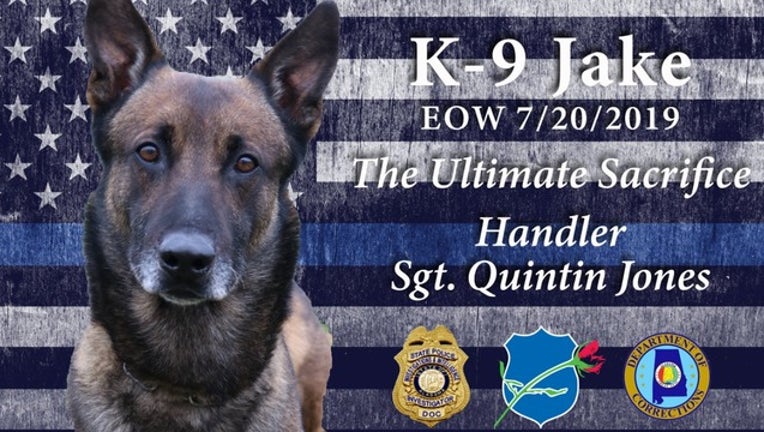 MONTGOMERY, Ala. (AP) - A prison search dog in Alabama that was injured after sniffing synthetic marijuana was expected to make a full recovery, but now authorities say he has died.

The Alabama Department of Corrections announced the dog, named Jake, died over the weekend when he developed pneumonia.

"It is with great sadness that we announce the passing of K-9 Jake, a partner of Sgt. Jones who died from complications after becoming ill during a contraband search operation at Staton Correctional Facility on Thursday, July 18," the department wrote on Twitter. "A burial service will be held later this week."

The prison system said the dog was searching a housing dorm for contraband at Staton Correctional Facility with emergency response teams. Jake became unresponsive after alerting on a powdery substance that turned out to be synthetic marijuana.

RELATED: Marine reunites with K-9 that served by his side in Afghanistan after 6 years

Veterinarians initially said he was improving after suffering an allergic reaction. Then his condition deteriorated over the weekend when he developed a secondary infection.

Al.com reports a funeral with full honors will be held for Jake and Gov. Kay Ivey also commended Jake's service to the state.