Former 'Empire' actor Jussie Smollett received 30-months probation Thursday, and the first 150 days must be spent in Cook County Jail for staging a racist and homophobic attack and lying to Chicago police in 2019.

CHICAGO - A judge sentenced Jussie Smollett to 150 days in jail Thursday, branding the Black and gay actor a narcissistic charlatan for staging a hate crime against himself to grab the limelight while the nation struggled with wrenching issues of racial injustice. Smollett responded by defiantly maintaining his innocence and suggesting he could be killed in jail.

The sentence and Smollett’s post-hearing outburst capped an hourslong hearing and more than three years of legal drama following Smollett’s claim that he had been the target of a racist and homophobic attack. 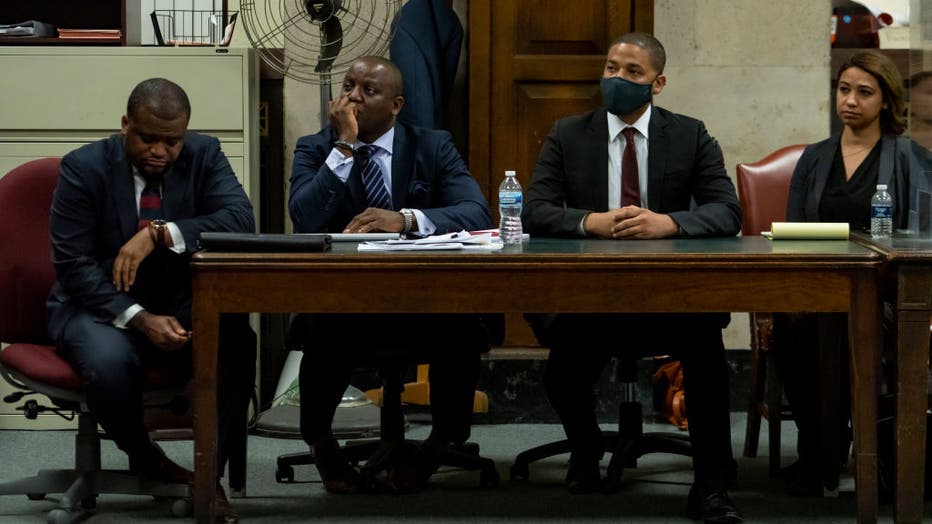 CHICAGO, ILLINOIS - MARCH 10: Actor Jussie Smollett and his attorneys listen as the sentence is read at the Leighton Criminal Court Building on March 10, 2022 in Chicago, Illinois. Jussie Smollett was found guilty late last year of lying to police ab

Smollett didn’t make a statement when offered the opportunity before the judge announced the sentence, saying he was listening to his attorneys’ advice. But after Cook County Judge James Linn issued his decision, Smollett removed the face mask he wore throughout the hearing to proclaim himself innocent.

"If I did this, then it means that I stuck my fist in the fears of Black Americans in this country for over 400 years and the fears of the LGBT community," Smollett said, standing up at the defense table as his lawyers and sheriff’s deputies surrounded him. "Your Honor, I respect you and I respect the jury but I did not do this. And I am not suicidal. And if anything happens to me when I go in there, I did not do it to myself. And you must all know that."

As deputies led him from the courtroom, Smollett shouted out again.

"I am innocent," he yelled, raising his fist. "I could have said I am guilty a long time ago."

Jussie Smollett reacts to jail sentence for hate crime hoax: 'I am not suicidal'

Jussie Smollett was sentenced to 150 days in Cook County Jail for staging a hate crime and lying to Chicago police in 2019.

The judge sentenced Smollett to 30 months of felony probation, with 150 days served in Cook County Jail, and ordered that he pay $120,106 in restitution to the city of Chicago and a $25,000 fine.

Special prosecutor Dan Webb asked Linn to include "an appropriate amount of prison time" when sentencing the actor for his conviction on five counts of disorderly conduct.

"His conduct denigrated hate crimes," Webb said after the hearing. "His conduct will discourage others who are victims of hate crimes from coming forward and reporting those crimes to law enforcement." 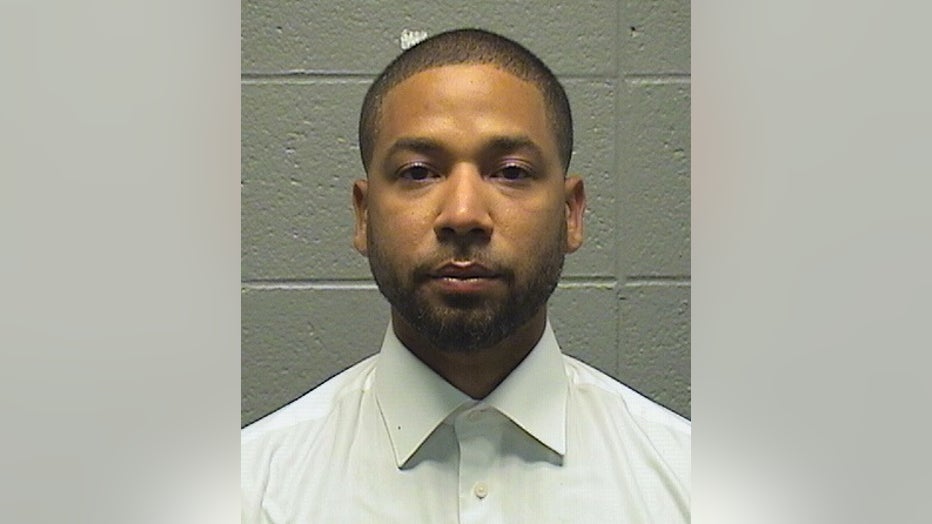 Smollett’s attorneys wanted the judge to limit the sentence to community service, arguing that he had already been punished by the criminal justice system and damage to his career.

"I ask you, judge, not to send him to prison," his grandmother, 92-year-old Molly Smollett, told the court. She later added, "If you do, send me along with him, OK?"

Jussie Smollett's grandma to judge: If you send him to prison, send me along with him

The 92-year-old grandmother of former 'Empire' actor Jussie Smollett spoke in court Thursday during his sentencing.

Smollett’s attorneys also read aloud letters from other supporters, including the president of the NAACP, the Rainbow PUSH Coalition and actors LaTanya and Samuel L. Jackson that asked Linn to consider the case’s effect on Smollett’s life and career.

Several supporters spoke about worries that Smollett would be at risk in prison, specifically mentioning his race, sexual orientation and his family’s Jewish heritage.

Linn said he did consider those requests for mercy, along with Smollett’s prior work for and financial support of social justice organizations. But Linn also excoriated Smollett as a narcissist and pronounced himself astounded by his actions given the actor’s multiracial family background and ties to social justice work.

"The damage you’ve done to yourself is way beyond anything else than can happen to you from me," Linn said. "You are now a permanently convicted felon."

Jussie Smollett's brother speaks ahead of court, 'He is going to be sentenced for something he did not do'

JoJo Smollett, brother of actor Jussie Smollett, joins Good Day Chicago ahead of the former Empire star's sentencing in court. JoJo says he will read a statement before the judge Thursday afternoon.

Smollett’s attorney Nenye Uche said he will ask the jail to keep Smollett in protective custody and plans to appeal both the verdict and the judge’s sentence.

Uche said he didn’t expect Linn to include jail time but Smollett did.

"He said: ‘Because I’m a Black guy, no matter how successful I’ve gotten, I’m Black,’" Uche told reporters after the hearing.

A spokesman for the Cook County Sheriff’s Office said Smollett will have a comprehensive medical, mental health and security assessment, a routine process.

Before the sentencing portion of the hearing began, Linn rejected a motion from the defense to overturn the jury’s verdict on legal grounds. Judges rarely grant such motions.

Smollett faced up to three years in prison for each of the five felony counts of disorderly conduct — the charge filed for lying to police — of which he was convicted. He was acquitted on a sixth count.

But because Smollett does not have an extensive criminal history and the conviction is for a low-level nonviolent crime, experts did not expect him to be sent to prison.

More than three years after Jussie Smollett told police he was the victim of a racist and homophobic attack in Chicago, the former 'Empire' actor will find out Thursday whether he's going to prison.

Thursday’s sentencing, which is subject to appeal, is the latest chapter in a criminal case that made international headlines when Smollett reported to police that two men wearing ski masks beat him, and hurled racial and homophobic slurs at him on a dark Chicago street and ran off.

Cook County State’s Attorney Kim Foxx had come under fire for her office’s decision to drop its initial charges against Smollett. On Thursday, Foxx blasted a "relentless, organized and effective" push to pursue Smollett while other serious crimes went unsolved or unresolved.

"Just because we do not like the outcome should not mean we bully prosecutors and circumvent the judicial process to get it changed," Foxx wrote in a column published by the Chicago Sun-Times. "Smollett was indicted, tried and convicted by a kangaroo prosecution in a matter of months."

Judicially appointed special prosecutors led the second case and Smollett was convicted in December. Witnesses at his trial included two brothers who told jurors Smollett paid them to carry out the attack, gave them money for the ski masks and rope, instructed them to fashion the rope into a noose. Prosecutors said he told them what racist and homophobic slurs to shout, and to yell that Smollett was in "MAGA Country," a reference to the campaign slogan of Donald Trump’s presidential campaign.

Smollett, who knew the men from his work on the television show "Empire" that filmed in Chicago, testified that he did not recognize them and did not know they were the men attacking him.

Unlike the trial, Linn agreed to let photographers and a television camera inside court for the hearing — meaning the public got to see and hear Smollett speak in court for the first time.

After nearly two weeks and what’s been, at times, a contentious trial, Jussie Smollett learned his fate Thursday.