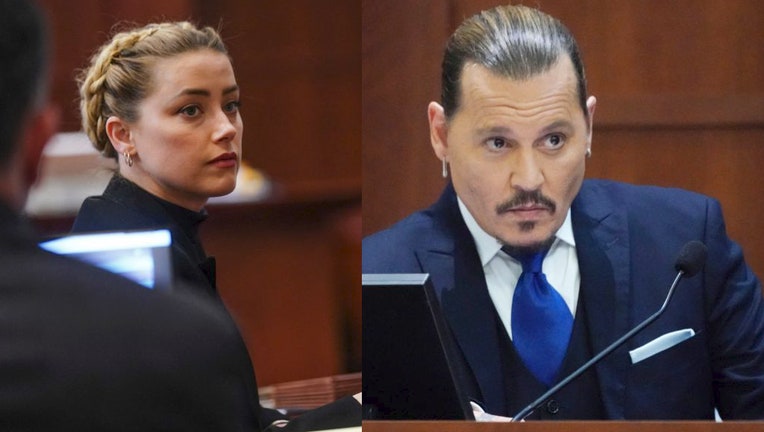 US actress Amber Heard looks over he shoulder during the 50 million US dollars Depp vs Heard defamation trial at the Fairfax County Circuit Court in Fairfax, Virginia,on April 14, 2022. - Heard is being sued for defamation by her former husband, US a

Depp is suing Heard for libel and the lawsuit itself is supposed to be over whether Heard libeled Depp when she wrote a 2018 op-ed piece in The Washington Post about domestic violence. In the article, Heard referred to herself as a "public figure representing domestic abuse."

She never mentioned Depp by name, but Depp and his lawyers said it was a clear reference to accusations Heard made in 2016 when the couple divorced and she sought a restraining order against him.

"This is what Amber carried in her purse for the entire relationship with Johnny Depp," Bredehoft told the jury.

"You’re going to hear the testimony from Amber about how she had to mix the different colors for the different days of the bruises as they developed," she continued.

Milani then released a TikTok video saying the product was released in 2017, well after the alleged abuse that took place between 2014 and 2016 and the subsequent divorce.

According to TMZ, Heard’s friend said the lawyer only held up the Milani product as an example and was saddened the company took to social media to call her out, saying it used the opportunity to make light of domestic violence.

Depp concluded a grueling four days on the witness stand Monday, telling jurors in a calm voice that he filed his libel lawsuit against his ex-wife because it was his best chance to reclaim his reputation, just hours after they heard audio clips of him berating his wife with coarse vulgarities.

He continued to deny that he ever hit Heard and accused her of hitting him and throwing items including paint cans and vodka bottles at him. And jurors heard an audio clip of a conversation between Depp and Heard in which she seems to taunt him and suggests he won’t be believed or respected if he were to publicly cast her as an abuser.

"Tell them, I, Johnny Depp, I’m a victim of domestic abuse ... and see how many people believe or side with you," Heard says on the recording.

Earlier Monday, though, they heard recordings in which Depp referred to the violence that could ensue if their arguments were allowed to escalate.

"The next move, if I don’t walk away ... it’s going to be a bloodbath, like it was on the island," Depp says on the recording.

In other clips, Depp loudly shouts vulgarities at his wife, calling her a degrading name and yelling, "You stupid f—-" at her.

On redirect Monday afternoon, Depp sought to explain some of his coarse language. He said he was often speaking figuratively or making inside jokes with friends, but added, "I’m ashamed that that has to be spread on the world like peanut butter."

And he again denied that he cut off his own finger during a fight with Heard, even though he told people as much at the time. He now says the finger was severed when Heard threw a vodka bottle at him.