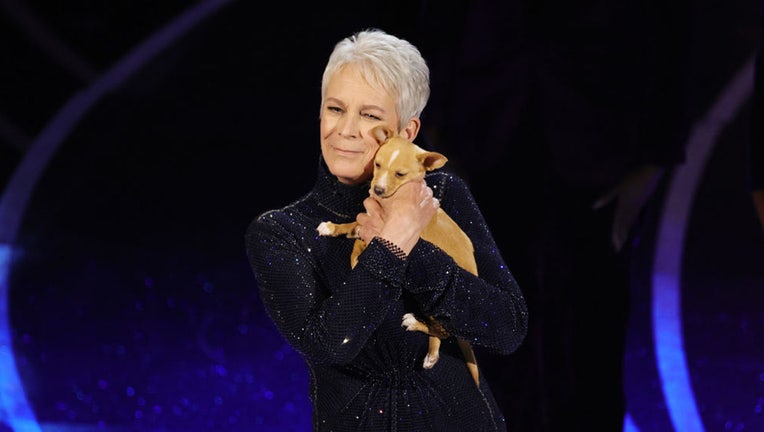 LOS ANGELES - It was a paw-fect match.

A rescue puppy that actress Jamie Lee Curtis advocated for in honor of Betty White, a staunch animal activist, during the Oscars on Sunday was adopted by none other than actor John Travolta’s son.

Curtis was slated to be the presenter for a tribute dedicated to the late and legendary White who died in December last year.

During the tribute, Curtis advocated for rescue animals while holding a puppy from Paw Works, a Southern California nonprofit dedicated to partnering with county and city shelters to give abandoned animals a second chance, according to the rescue’s Facebook page.

The puppy, named Mac and Cheese, was chosen by Curtis ahead of the pup’s TV debut.

During the awards ceremony, Curtis posted on her Instagram that she ran into her fellow "PERFECT" co-star, Travolta, who took a picture with Mac and Cheese.

The next day, Travolta posted on his Instagram sharing that his son, Ben, officially adopted the rescue pup.

Curtis celebrated the news on her own Instagram account, saying Mac and Cheese finding her fur-ever home was "a magical ending" to the pup’s journey.

"I had already left the Dolby theater last night after honoring Betty White and was on my way home when someone texted me a photo of John holding little mac & cheese in the green room before his presentation of the best actor Oscar. I thought it was so beautiful to see him with her and then today I found out that he and his son, Ben have adopted beautiful little mac & cheese and are taking her home today. It is an emotional end and a perfect tribute to Betty White and it shines a light and AMPLIFIES the message that heroes who, like Betty, and Chad from @pawworks and Nancy from @perfect_pet_rescue and the team at @maedayrescue and the hundreds of thousands of other rescues, who love and support ANIMALS, that rescuing animals and offering them shelter from the storm of life and a warm and loving home is one of life's most important actions we humans can take! #adoptdontshop," Curtis' post read in part.