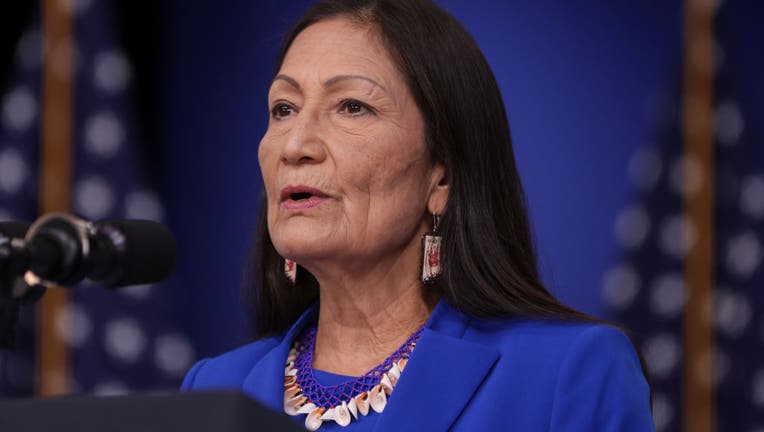 ALBUQUERQUE, N.M. (AP) - Federal officials have come up with a list of potential replacement names for hundreds of geographic features in three dozen states that include the word "squaw," kicking off a public comment period that will run through late April.

U.S. Interior Secretary Deb Haaland in November formally declared the term derogatory and initiated a process to remove the word from use by the federal government and to replace other existing derogatory place names.

Haaland said in a statement Tuesday that words matter, particularly as the agency works to make the nation’s public lands and waters accessible and welcoming to people of all backgrounds.

"Consideration of these replacements is a big step forward in our efforts to remove derogatory terms whose expiration dates are long overdue," she said. "Throughout this process, broad engagement with tribes, stakeholders and the general public will help us advance our goals of equity and inclusion."

Experts have said the word "squaw," derived from the Algonquin language, may have once simply meant "woman," but over time it morphed into a term used to disparage Indigenous women. Its elimination by the Interior Department is among many efforts nationally to address a history of colonialism and oppression of Native Americans.

The agency is planning three virtual meetings to consult with tribes in March, and written comments will be accepted through April 24.

Under Haaland’s order, the first action by a task force made up of officials from several federal departments was to finalize a decision to replace a full spelling of the derogatory term with "sq----" for all official related communications.

It also will be up to the task force to prioritize the list of replacement names and make recommendations to the Board on Geographic Names before it meets later this year.

As part of the process, the U.S. Geological Survey came up with five candidate names for each feature. The list includes more than 660 sites in New Mexico, Arizona, Nevada, California, Idaho and many other states.

In the 1960s and 1970s, the Board on Geographic Names took action to eliminate the use of derogatory terms related to Black and Japanese people. Over the past two decades, the board has received 261 proposals to replace geographic features with squaw in the name, according to the Interior Department.

The board also voted in 2008 to change the name of a prominent Phoenix mountain from Squaw Peak to Piestewa Peak to honor Army Spc. Lori Piestewa, the first Native American woman to die in combat while serving in the U.S. military.

The Arizona Senate recently passed a memorial asking the federal government to replace the names of geographic features in the Grand Canyon region with Native American names to promote an understanding of and appreciation for the "unique and significant cultures and heritage of the Grand Canyon’s tribal peoples."

Lawmakers in that state also are considering a measure that would require the Arizona Board on Geographic and Historic Names to rename anything that includes the word squaw.