Though preliminary, researchers say the findings could help inform how pregnant women should be clinically monitored during the pandemic.

Microplastics are pieces of plastic that measure less than 5 millimeters, according to the study.

Researchers collected data from six infants and 10 adults and found that the infants had much more microplastics in their feces as opposed to the adults.

Much of the reason for the vast difference in data might be because infants are exposed far more to microplastics than adults, according to the study authors.

Researchers attributed the use of plastic toys such as teethers, bottles, sippy cups and other plastic utensils as a few of the likely culprits exposing children to larger amounts of microplastics. 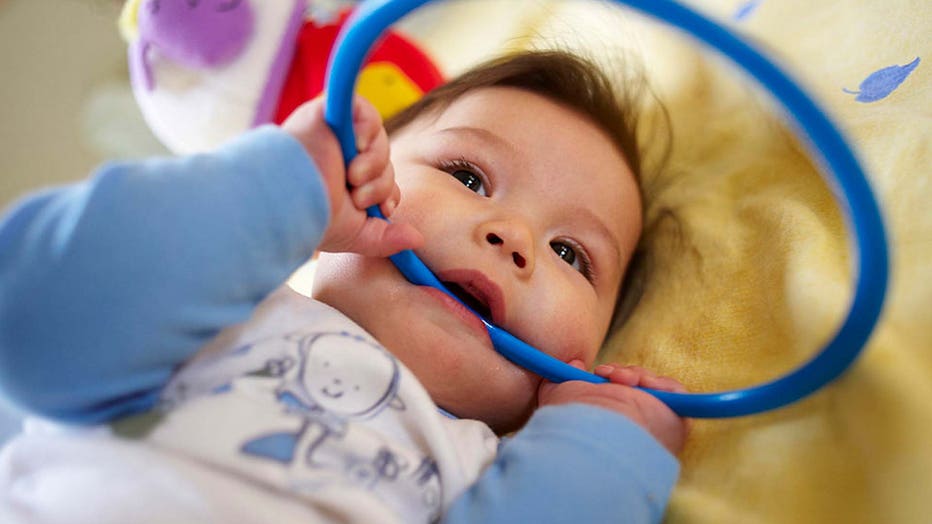 "One-year-old infants are known to frequently mouth plastic products and clothing. In addition, studies have shown that infant formula prepared in PP bottles can release millions of MPs, and many processed baby foods are packaged in plastic containers that constitute another source of exposure in one-year-old infants," according to the study.

Study authors also noted that infants often chew and suck on cloths, which can be another source of microplastics exposure.

"Carpets made of PET and PP can be another source of MP exposure, as infants crawl on the carpeted surfaces frequently," according to the study.

Exposure in pregnant mice revealed their offspring were born with metabolic disorders which is "indicative of transgenerational effects," the study continued.

The disturbing amount of plastic humans take in is not new but researchers said more studies need to be done to better understand the effects and reverse the level of microplastic consumption not just by humans, but also animals.

Microplastics have become so invasive, it’s even been discovered in the placentas of pregnant women.

RELATED: Study: Humans ingest 74,000 plastic particles each year and even more if you drink bottled water

In a December 2020 study, researchers found microplastics in human placentas for the first time, shedding new light on the level of human exposure to such materials and giving rise to concern about their potential to interfere with fetal development.

The study, published in the journal Environment International, found particles in the placentas of four healthy women who had normal pregnancies and births in Italy. The microplastics were detected on both the fetal and maternal sides of the placenta, as well as in the membranes that surround and protect the fetus.

In total, researchers found 12 microplastic fragments with spherical or irregular shapes. Most were 10 microns in size, meaning they were small enough to be transported in the bloodstream.

Global production of plastics has reached over 320 million tons per year, and more than 40% is used as single-use packaging — leading to a massive amount of plastic waste.

More than 8 million tons of plastic is dumped into the world’s oceans every year, according to the nonprofit Plastic Oceans International.

Previous studies have found microplastics in food, sea salt and drinking water. The implications of microplastics in the human body are not yet thoroughly understood, but scientists say these particles are considered foreign bodies, and as such, trigger immune reactions.