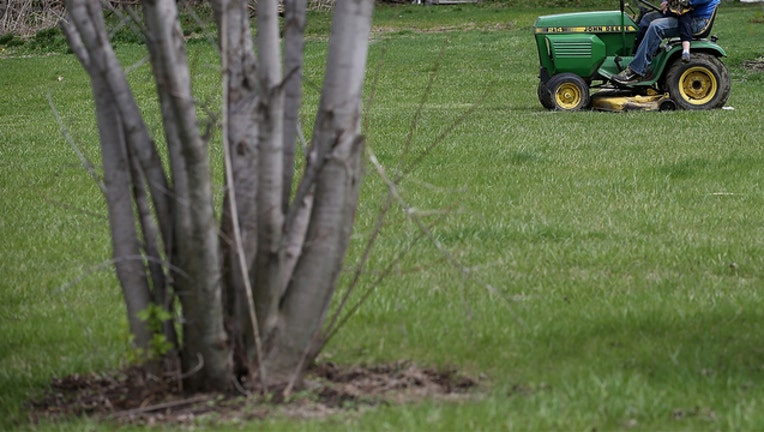 Four year-old Hayden Giles and his father Charlie Giles ride a mower in their front yard on April 13, 2015 in Kellerton, Iowa. (Photo by Justin Sullivan/Getty Images)

FOX NEWS - A toddler in Indiana sustained serious injuries on Saturday after his grandfather backed over him with a lawn mower, according to officials.

The Jennings County Sheriff's Office said on Facebook the incident happened around 1 p.m. on the 3600 block of Grayford Road in Commiskey, located about 70 miles south of Indianapolis.

"Deputies are still investigating and thus far calling it a terrible accident," police said. "Our thoughts are with the family during this difficult time."

Police said that William and Beverly Waltermire showed up at the sheriff's office in North Vernon asking for an ambulance for their grandson.

While William was mowing the lawn at a property on Grayford Road, the 2-year-old boy ran towards his grandfather, chased by his grandmother, according to police.

The boy then fell as the grandfather was backing up, and went under the lawn mower while it was still running, the couple told the police.

The grandparents rushed to the sheriff's office, met with emergency responders, and the grandson was transported to St. Vincent Jennings Hospital in North Vernon.

The boy was then flown to Riley Hospital in Indianapolis for "serious injuries," according to police.

"We would like to thank Rescue 20 and St. Vincent-Jennings Hospital Staff as well as Officers from the North Vernon Police Department for their efforts," police said.

Additional incidents about the accident have yet to be released. The sheriff's office said that deputies are still investigating.