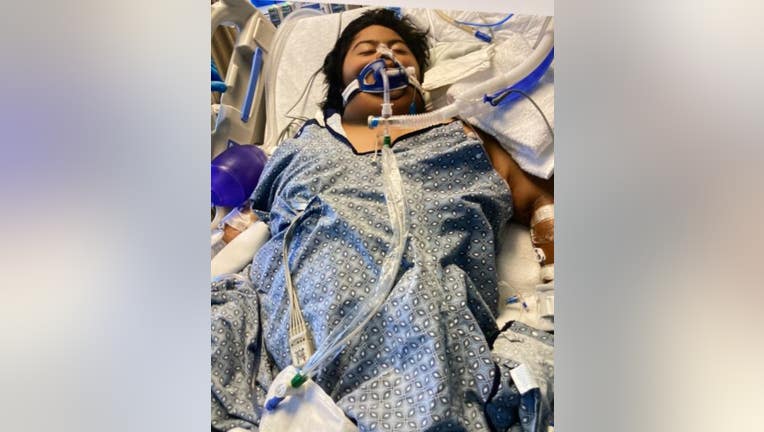 Alonso Moreira on a ventilator after being hospitalized with COVID-19. | Provided

CHICAGO - Rina Miller spent her days and nights caring for her son with Down syndrome.

Not long after Alonso Moreira’s 12th birthday earlier this month, they both began struggling to breathe. They had been infected with the coronavirus.

Paramedics took them to Stroger Hospital, where they were placed at opposite ends of the hospital. Miller said she pleaded in vain with doctors to transfer Alonso to a hospital better suited for his age and condition.

Two days later, a doctor came to her room and told her Alonso had died.

"It’s too hard, and I miss my son," Miller said through tears.

Since the pandemic began last year, nine children 15 years old or younger have died from COVID-19 in Cook County. Most had underlying medical conditions that put them at a higher risk of dying from the coronavirus. In early August, a 9-year-old boy with cerebral palsy died. In June, a 7-year-old girl with leukemia died.

Their deaths point up the particular dangers to medically vulnerable children that COVID poses.

"Children with any kind of underlying condition are at more risk of getting more severe COVID disease if they get infected," said Dr. Tina Tan, a pediatrician at Ann & Robert H. Lurie Children’s Hospital. "And many of those kids will be hospitalized. And unfortunately some of them will die."

Common underlying conditions among children who have died of COVID include obesity, diabetes and asthma. And children with Down syndrome have been found to be 10 times more likely to die from the virus.

Tan said children from minority communities are more likely to contract the virus and thus to die from it.

"These kids come from multi-generational homes with less easy access to health care, probably have an underlying condition such as obesity or asthma and are usually from lower socioeconomic areas where there’s a disparity in healthcare access," she said.

There’s no evidence that children are becoming sicker from the more highly contagious Delta variant of COVID-19, Tan said. But more children are becoming infected because the variant is more easily transmitted, and many children remain unvaccinated, even though the vaccine was approved in May for children as young as 12.

Child cases of the coronavirus have sharply risen since early summer, from about 38,000 cases a week in July to 180,000 a week in August, according to the American Academy of Pediatrics.

Miller lives in Lawndale, where the vaccination rate is lower than in many parts of Chicago, according to city data.

Miller said neither she nor her son had been vaccinated, though she’d planned on eventually getting the shot for herself and her son.

Since being discharged from the hospital, Miller said she has been struggling financially even more than she had been. She said she works odd jobs, but "sometimes they pay me, and sometimes they don’t," she said.

Miller said her state identification card expired, and she hasn’t gotten a new one, so she couldn’t apply for Medicaid. She said she got rid of her belongings after she and her son got sick, fearing it could be possible for her to get infected again, though there’s no medical basis for that.

"We’ve got nothing," she said, waving an arm across her basement apartment, barren except for a chair and a small pile of hospital paperwork.

Miller said she traveled across town to file paperwork for a new ID in the hopes she can pay for her son’s burial. For now, his body remains at the morgue. She said she has reached out to charities but hasn’t heard back.

"I pray to God to be strong," Miller said. "We pray God is going to take care of this."

Alonso’s family has started an online fundraiser to help pay for his burial.