LaPLACE, La. - Hundreds of thousands of homes and businesses in Louisiana, most of them outside New Orleans, still didn’t have power Tuesday and more than half the gas stations in two major cities were without fuel nine days after Hurricane Ida slammed into the state, splintering homes and toppling electric lines.

There were also continuing signs of recovery, however, as the total number of people without electricity has fallen from more than a million at its peak, while hundreds of thousands of people have had their water restored.

State health officials, meanwhile, announced that they are revoking the licenses of seven nursing homes that evacuated to a warehouse where seven residents died amid deteriorating conditions after the hurricane.

The disparity in power restoration between New Orleans, where nearly 3/4 of the city had electricity again, and other communities where almost all residents were still in the dark prompted frustration and finger-pointing. 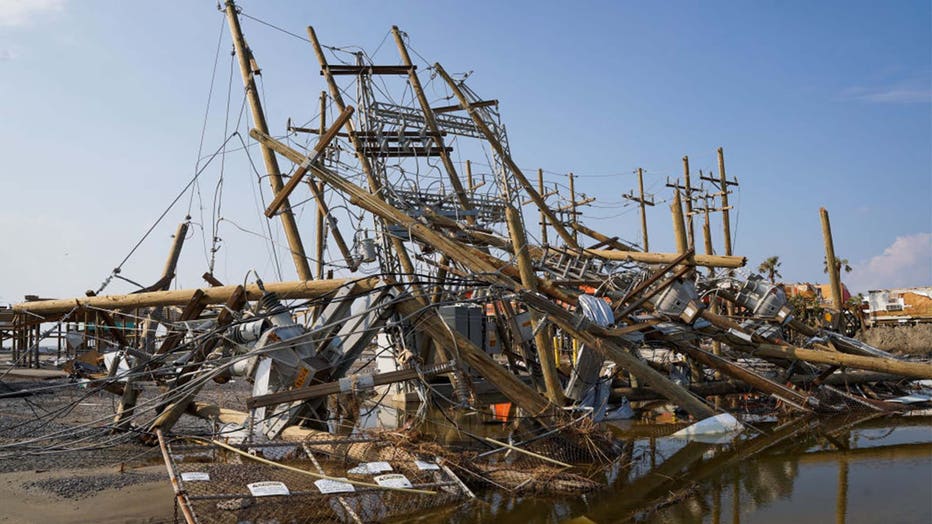 FILE - An electrical substation stands in the wake of Hurricane Ida on Sept. 4, 2021 in Grand Isle, Louisiana.

State Rep. Tanner Magee, the House’s second-ranking Republican who lives in the devastated city of Houma in Terrebonne Parish, said he's convinced his region is being shortchanged in favor of New Orleans.

Though water was running again in his area, most hospitals in the region remained shuttered and the parish was in desperate need of temporary shelter for first responders and others vital to the rebuilding effort, he said.

Warner Thomas, president and CEO of the state's largest hospital system Ochsner Health warned that it would be "some time" before two Ochsner hospitals — one in Terrebonne Parish and the other in Lafourche Parish — fully reopen. Emergency rooms at the two hospitals, however, were operating.

Carnival Cruise Line announced Tuesday that it will keep one of its ships, Carnival Glory, docked in New Orleans through Sept. 18 to serve as housing for first responders.

Louisiana Gov. John Bel Edwards said while there had been much progress in restoring water and power, "there’s an awful lot of work to be done."

Without power, the Louisiana heat is the hardest thing to cope with, said Kim Bass, who lives in St. John the Baptist Parish. She and her husband are using a generator to keep food refrigerated but have no air conditioning. Water service is intermittent.

"So you may have water one minute, then you may not have water for the next two days," Bass said.

In many neighborhoods, homes were uninhabitable. State and federal officials said about 3,200 people are in mass shelters around Louisiana while another 25,000 people whose houses have been damaged are staying in hotel rooms through the Federal Emergency Management Agency’s transitional sheltering program. FEMA already has approved more than 159,000 household applications for disaster assistance, according to Louisiana’s emergency preparedness office.

Shontrece and Michael Lathers looked on despondently as workers wrestled a billowing blue tarp into place over what was left of the roof of their home in the St. John the Baptist Parish town of LaPlace. Ida’s floodwaters had risen to about 3 feet (1 meter) inside their home and rain that had poured in through the wind-damaged roof obliterated most of the drywall ceilings.

The house will have to be gutted floor to ceiling, Michael Lathers said, adding that he had no idea how much the repairs will cost.

Fuel shortages also persisted across hard-hit areas of the state. More than 50% of gas stations in New Orleans and Baton Rouge remained without gasoline Tuesday afternoon, according to GasBuddy.com.

The power situation has improved greatly since Ida first hit. In the first hours after the storm, nearly 1.1 million customers were in the dark, but that number was down to about 430,000 on Tuesday. With the help of tens of thousands of workers from power companies in numerous states, the state’s biggest energy provider, Entergy, has been able to slowly bring electricity back, leaving only 19% of its customers in the region without power as of Tuesday.

For residents in the state’s five hardest-hit parishes in southeastern Louisiana, however, that number is little comfort. Fully 98% of those residents are still without power more than a week after Ida slammed onshore with 150 mph winds (240 kph) on Aug. 29.

Power probably won’t be widely restored to St. John the Baptist and St. James parishes until Sept. 17 and until Sept. 29 to Lafourche, St. Charles and Terrebonne parishes, Entergy said Tuesday. The parishes are home to about 325,000 people.

In contrast, nearly all power has been restored in the capital of Baton Rouge, and only 25% of homes and businesses are still suffering outages in New Orleans. Entergy said it expected to have the vast majority of New Orleans brought online by Wednesday. Once areas such as New Orleans have their power restored, Entergy is moving its crews into communities south and west of the city that saw more widespread damage, said Entergy Louisiana President and CEO Phillip May.

As Entergy worked to get the lights turned on everywhere, the Louisiana Department of Health reported that the number of people without water had fallen from a peak of 850,000 to 62,000, though about 580,000 people were being advised to boil their water for safety. And grocery stores reopened in some places.

Ida's death toll in Louisiana rose to 15 people Tuesday after the state Department of Health reported two additional storm-related fatalities: a 68-year-old man who fell off of a roof while making repairs to damage caused by Hurricane Ida and a 71-year-old man who died of a lack of oxygen during an extended power outage. The storm's remnants also brought historic flooding, record rains and tornados from Virginia to Massachusetts, killing at least 50 more people.