Incredible video captured by an ocean drone shows the intensity of Hurricane Fiona. The Saildrone Explorer SD 1078 was deployed in Fiona's path and has sent back the first video recorded near the eye of the powerful Category 4 hurricane.

Incredible video captured by an ocean drone shows the intensity of Hurricane Fiona, which was situated about 300 miles southwest of Bermuda on Thursday afternoon. The Saildrone Explorer SD 1078 was in Fiona's path as it tracked north and has sent back video recorded near the eye of the powerful Category 4 hurricane.

SD 1078 is one of several specially designed "saildrones" in the Atlantic Ocean this hurricane season, piloted by the National Oceanic and Atmospheric Administration (NOAA) and California-based Saildrone Inc. The saildrones will gather data around the clock that will help understand the physical processes of one of Earth’s most destructive forces.

While near Hurricane Fiona's eye, SD 1078 encountered 50-foot waves and measured winds over 100 mph. SD 1078 is sailing at sustained speeds over 9 mph. At one moment, it reached a peak speed of 39.7 mph while surfing down a massive wave inside Hurricane Fiona. 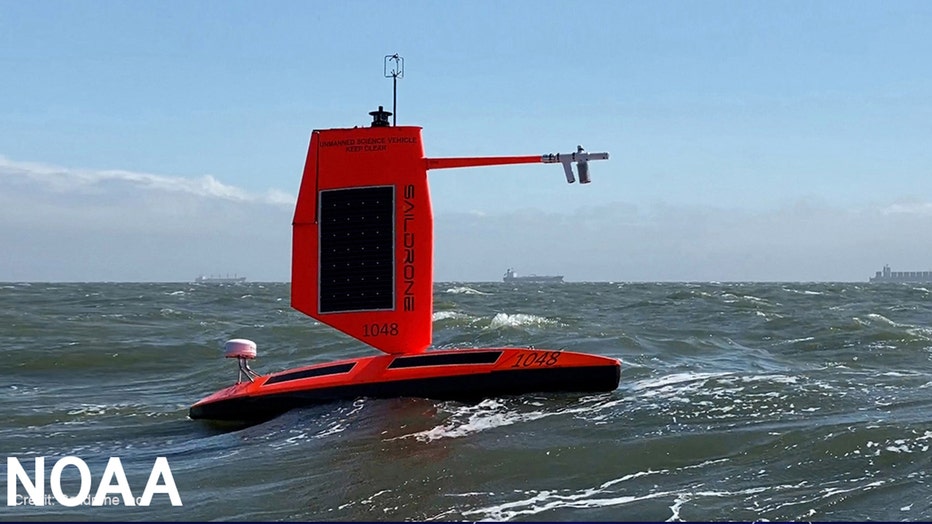 NOAA and Saildrone Inc. are piloting five specially designed saildrones in the Atlantic Ocean to gather data around the clock to help understand the physical processes of hurricanes. (Credit: Saildrone)

"Uncrewed systems in the air, on the ocean surface, and underwater have the potential to transform how NOAA meets its mission to better understand the environment," said Capt. Philip Hall, director of NOAA’s Uncrewed Systems Operations Center, which is providing funding for the Saildrone effort. "These exciting emerging technologies provide NOAA with another valuable tool that can collect data in places we can’t get to with other observing systems."

SD 1078 is the fourth Saildrone USV to engage with Hurricane Fiona, according to Saildrone, Inc.

Watch: Hurricane hunters head inside the eye of Hurricane Fiona

Here's a snippet inside the center of category 4 Hurricane Fiona

Fiona was still a tropical storm when it passed over SD 1083, stationed over 400 miles east of Montserrat. It strengthened to a Category 1 hurricane as it passed over SD 1031, south of Puerto Rico, where Fiona first made landfall. The vehicle recorded waves up to 46 feet high and wind speeds over 70 mph, which dropped abruptly to as low as 10 mph when SD 1031 was in the eye of the storm. Stationed north of Puerto Rico, SD 1040 recorded wind speeds over 60 mph and 40-foot waves on the edge of the storm.

Hurricane Fiona is currently on a path northward in the Atlantic Ocean and is predicted to impact Bermuda on Thursday night and is targeting the Canadian province of Nova Scotia on Friday. Hurricane Fiona is the first Category 4 storm of the 2022 season.