U.S. Attorney General Merrick Garland announced on Thursday that the Department of Justice has filed a lawsuit to sue the state of Texas over its stringent abortion law, arguing that it was enacted "in open defiance of the Constitution."

WASHINGTON (AP) - The House passed legislation Friday that would guarantee a woman’s right to an abortion, an effort by Democrats to circumvent a new Texas law that has placed that access under threat.

But the bill's 218-211 approval is mostly symbolic, as Republican opposition will doom it in the Senate.

Still, Democrats say they are doing all they can to codify the Supreme Court’s 1973 Roe v. Wade decision after the Supreme Court recently allowed the Texas law banning most abortions in the state to take effect. The court will hear arguments in December in a separate Mississippi bid to overturn the landmark decision.

Codifying the Roe ruling would mean creating a right to abortion in federal law, a monumental change that would make it harder for courts and states to impose restrictions.

House Speaker Nancy Pelosi has said that congressional action would make a "tremendous difference" in Democrats’ efforts to maintain access to abortion rights. She called the Supreme Court's decision "shameful" and counter to its own precedent.

Pelosi said just ahead of Friday's vote that it should "send a very positive message to the women of our country — but not just the women, to the women and their families, to everyone who values freedom, honors our Constitution and respects women."

Republicans, including the few who favor abortion rights, overwhelmingly voted against the legislation, which would supersede state laws on the subject, give health care providers the right to perform abortions and patients the right to receive them. Republicans argue it would prevent states from setting requirements like parental involvement and could weaken laws that allow doctors to refuse to perform an abortion.

RELATED: How many abortions would Texas' 6-week ban prevent?

The legislation "isn't about freedom for women, it's about death for babies," said Republican Rep. Vicky Hartzler of Missouri. She said it would eliminate protections for women and girls who may be coerced into having abortions.

"It ends the life of a living human being with a plan and a purpose from God and who deserves to live," Hartzler said. 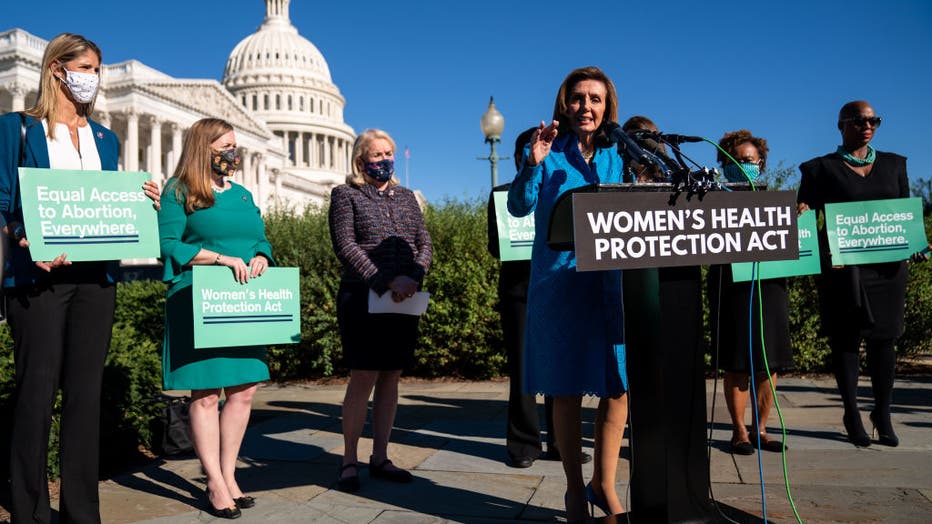 Speaker of the House Nancy Pelosi (D-CA) speaks during a news conference on the Women's Health Protection Act, outside the U.S. Capitol on Friday, Sept. 24, 2021 in Washington, DC. (Kent Nishimura / Los Angeles Times via Getty Images)

The vote came as Democrats have spoken boldly about fighting the Supreme Court — which has a more conservative tilt after Justice Amy Coney Barrett was confirmed last year — but struggled privately to find an effective strategy. They control Congress by the slimmest of margins, including the evenly split 50-50 Senate, making the prospects of a successful legislative response difficult.

The party has split, in some cases, over how far Washington must go to preserve access to abortions. Liberal lawmakers backed by advocates of reproductive rights who helped power President Joe Biden to office want to expand the number of justices on the Supreme Court to rebalance power, changing the rules if needed to lower the 60-vote threshold typically required in the Senate to advance legislation.

"Democrats can either abolish the filibuster and expand the court, or do nothing as millions of peoples’ bodies, rights, and lives are sacrificed for far-right minority rule," tweeted Rep. Alexandria Ocasio-Cortez, D-N.Y. "This shouldn’t be a difficult decision."

But other Democrats — Biden among them — have been wary of such a move.

Biden supports the House bill and called the court’s ruling on Texas an "unprecedented assault on a woman’s constitutional rights." He has directed multiple agencies to conduct a government-wide effort to ensure women have abortion access and to protect health care providers. But he has not endorsed the idea of adding justices to the Supreme Court, instead forming a commission to study it.

The court's decisions on abortion could prompt political tensions among Republicans, as well.

Former President Donald Trump was able to secure three new conservative Supreme Court justices because Republican leadership in Congress led by GOP leader Mitch McConnell paved the way. Now, as the court upheld the strict new Texas aw outlawing most abortions in the state, the political fallout will test the limits of that strategy.

Women and advocates of abortion rights are quickly mobilizing to take on not just those Republicans, but also the big businesses that backed them, aiming squarely at those that contributed to many of the Texas Republicans behind the abortion law.

"They will be met with a fierce response from women and people across the country," said Sonja Spoo, director of Reproductive Rights Campaigns at UltraViolet, an advocacy organization, in an interview Thursday.

Maine Sen. Susan Collins, a Republican who supports abortion rights, says the Texas law is "harmful and extreme" and she supports codifying Roe.

But she says the House bill goes "way beyond" that and could threaten the rights of doctors who refuse to perform abortions on religious or moral grounds, for example.

"I support codifying Roe, and I am working with some of my colleagues in the Senate on legislation that would do so," Collins said in a statement.