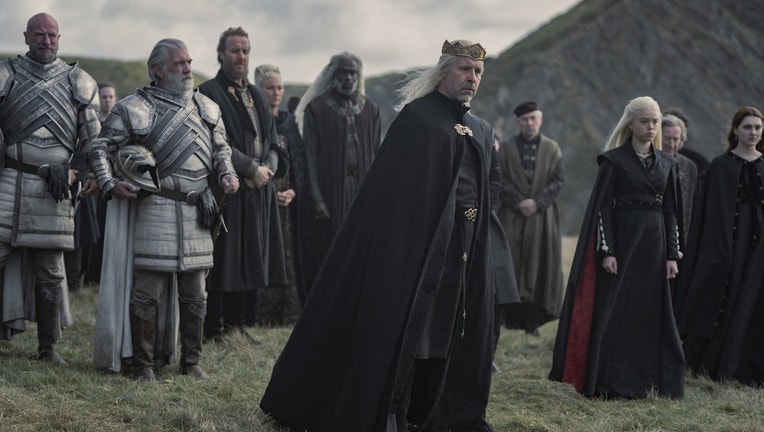 Chicago - "When you play the game of thrones, you win or you die," Cersei Lannister (Lena Headey) tells Ned Stark (Sean Bean) in the first season of HBO’s "Game of Thrones." And while it remains to be seen exactly how much death is in store for the characters in the new prequel series "House of the Dragon," which premiered Sunday on HBO and HBO Max, there’s no doubt that the battle for the Iron Throne will be just as fearsome — even if it involves more backroom dealing than open warfare.

Like "Game of Thrones," "House of the Dragon" contains dozens of characters with strange names, questionable wigs and confusing relationships to one another. So we’re here to help you get to know the new players who will be dominating Sunday night TV for the next nine weeks. Read on for a guide to who’s who — or you can check out our general primer for the series and our spoiler-free review of the first six episodes.

Oh, and if you haven't watched the series premiere, you may want to turn back: This story contains plot details from episode one of "House of the Dragon."

The Main Quartet — A family affair 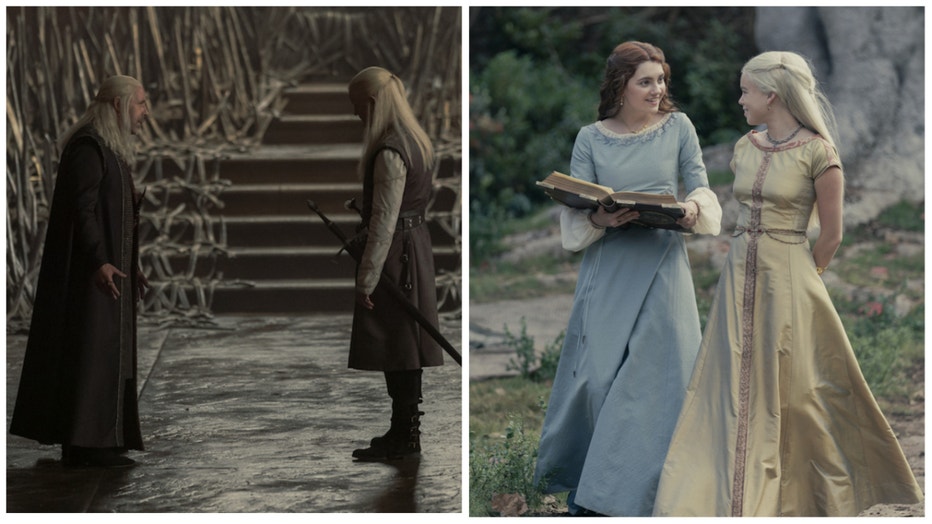 The good news is that unlike "Thrones," which told a sprawling, kingdom-hopping narrative filled with different houses and families all vying for control, "House of the Dragon" is a much more contained story. Set 200 years before the events of "Game of Thrones," "House of the Dragon" follows the ancestors of Daenerys Targaryen (Emilia Clarke) during their prosperous 300-year reign over Westeros.

While there’s still squabbling over who should sit on the Iron Throne, this crisis of succession is more of a tightknit family drama than a kingdom-wide calamity. In fact, there are really just four main Targaryen/Targaryen-adjacent characters who anchor the series. So once you know who they are, you’ll be on solid ground. 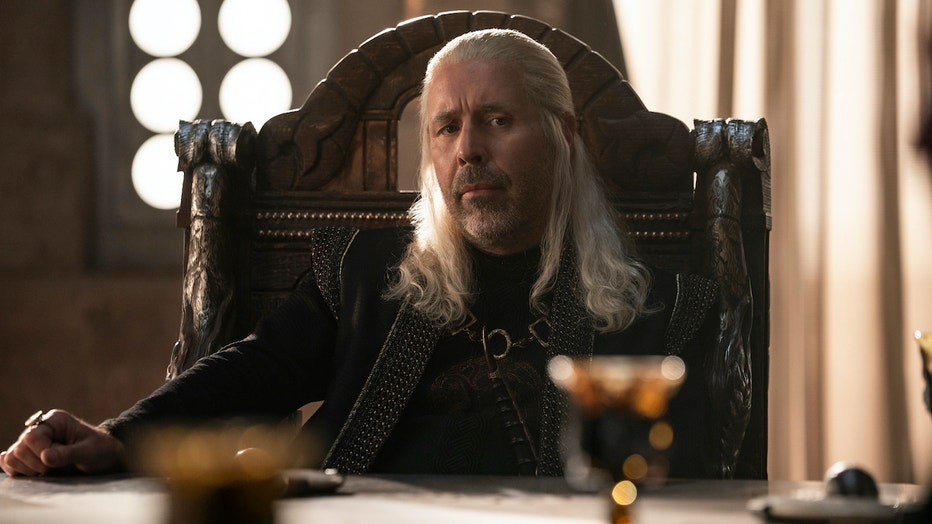 "House of the Dragon" opens with a prologue explaining that after a brief question of succession, Viserys was chosen to inherit the Iron Throne from his grandfather King Jaehaerys Targaryen. Viserys has been a decent king of Westeros the past nine years, trying to keep up the peace and prosperity of his grandfather’s nearly 60-year reign. He’s kinder and more responsible than a lot of the leaders we’ve previously seen sit on the Iron Throne, although his tendency to assume everything will work out okay gives him a streak of passivity, shortsightedness and even selfishness. When his hopes of having a son are dashed, he has to choose whether to allow the throne to pass to his younger brother/heir presumptive Daemon — or break with tradition and have his daughter Rhaenyra succeed him.

WATCH FREE ON TUBI: Gerard Butler leads a Spartan army in "300" — get the app 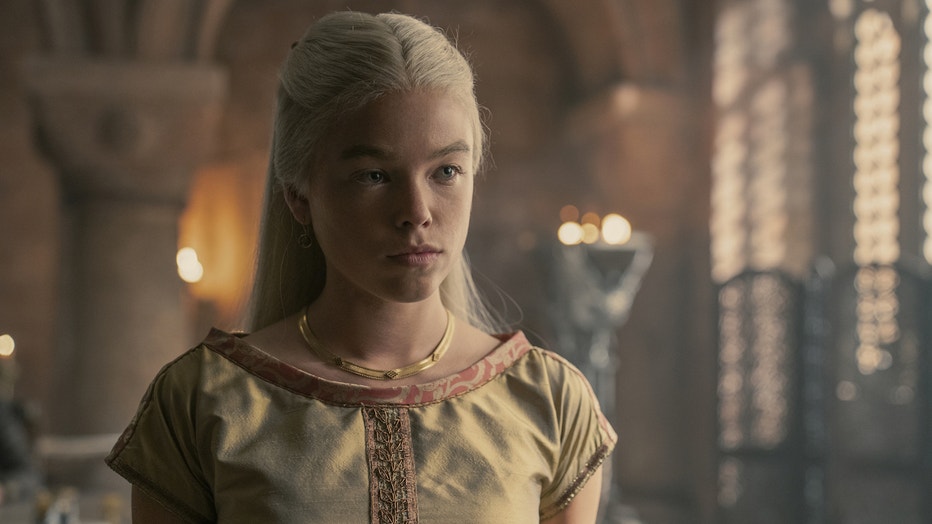 In as much as "House of the Dragon" has a lead character, it’s Rhaenyra, the dragon-riding princess who longs for adventure and balks at the limitations for women in Westeros. Yet while she’s got shades of Arya Stark to her, Rhaenyra is also a savvy royal like her descendant Daenerys. She understands there’s a way to use her privilege, not just reject it. And after a lifetime of living in the shadow of her father’s dreams for a son, Rhaenyra’s world is upended when Viserys unexpectedly names her as his heir — which would make her the first Queen in Westerosi history. While the episode ends with the noble lords swearing their fealty to her, Rhaenyra will likely face an uphill battle when it comes to actually claiming the Iron Throne. Thankfully, she’s got her dragon Syrax by her side. (And as a preview of things to come, Rhaenyra will also be played by Emma D'Arcy later in the season.) 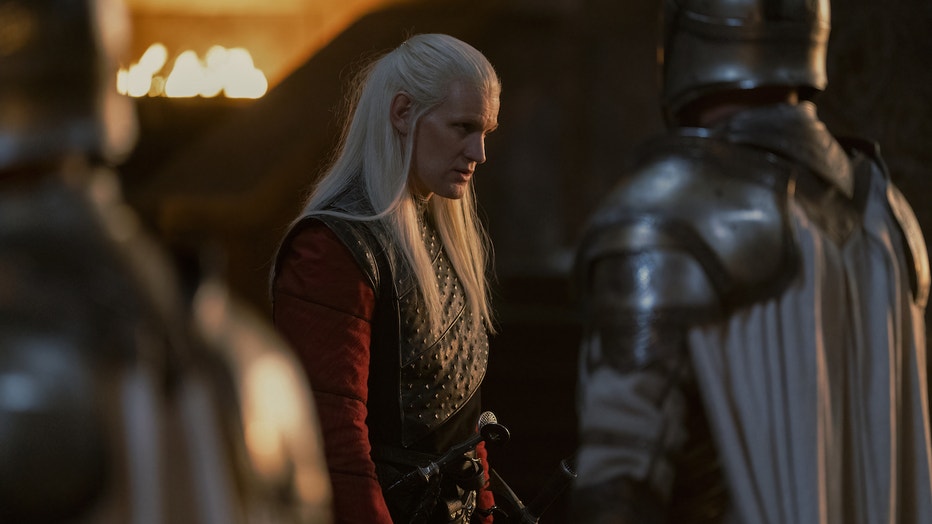 The resident bad boy of "House of the Dragon," Daemon immediately stands out as one of the most interesting and original characters in the "Thrones" universe. He can be deeply cruel, as we see when he uses his position as Commander of the City Watch to viciously torture and maim the criminals of King’s Landing. But he also has a softer, intelligent side — not to mention an intimate bond with his niece Rhaenyra. (Daemon is unhappily married to Lady Rhea of the Vale, although that doesn’t stop him from regularly visiting the city’s pleasure houses.) He’s got a sword called Dark Sister, a dragon named Caraxes and some complicated feelings of rejection about how his older brother treats him. Oh, and he also has a deep belief that it’s his birth right to succeed Viserys as the next king of Westeros.

WATCH FREE ON TUBI: "Clash of the Titans" — get the app 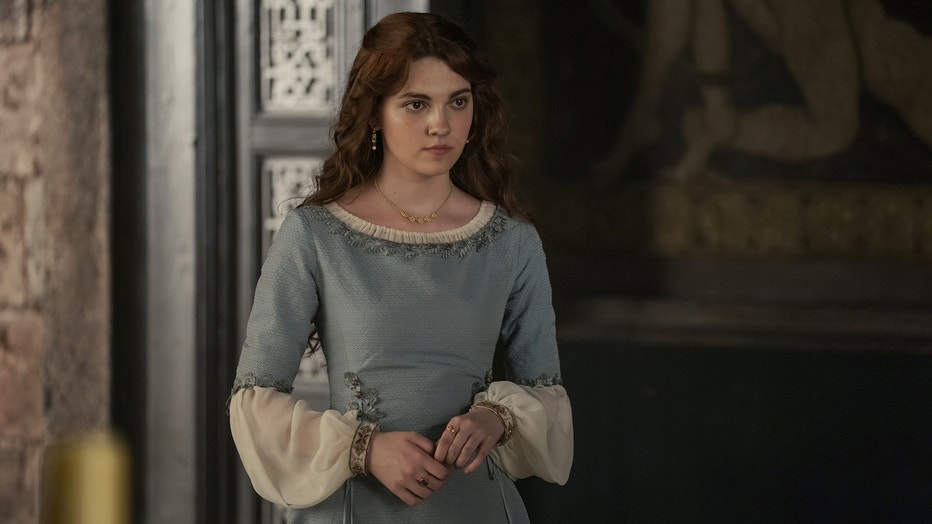 Rhaenyra’s best friend is a gentle courtly beauty who immediately calls to mind Margaery Tyrell or Sansa Stark. While Rhaenyra longs for great dragon-riding adventures, Alicent is content to fulfill her role as a lady of the realm. But that doesn’t mean she doesn’t have her own internal struggles, especially given the recent death of her mother. We see the way Alicent picks at her fingers when she’s stressed — a habit that only increases when her father Ser Otto sends her to comfort the newly widowed King with private conversations in his chambers. Alicent’s exact role in this power struggle is yet to be determined, but Olivia Cooke will be stepping into the character’s shoes later in the season.

MVSPs — the most valuable supporting players 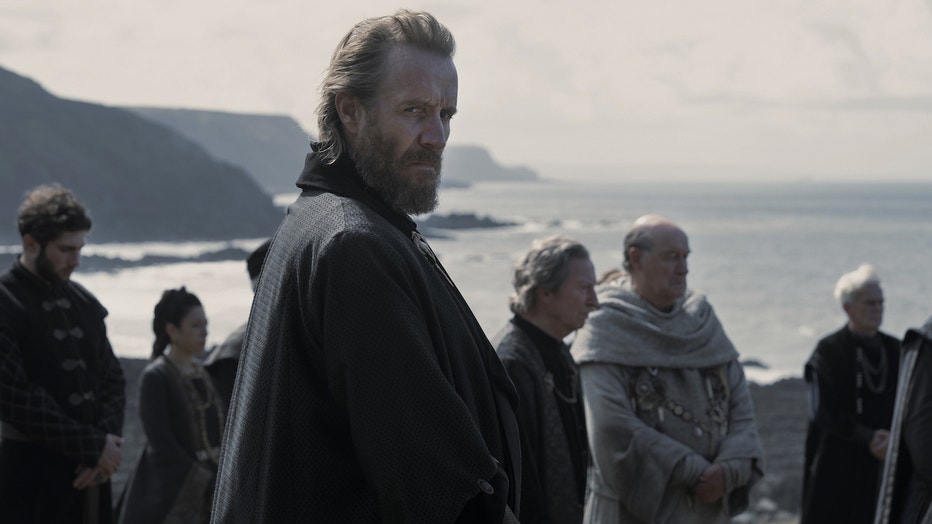 One of the things the "House of the Dragon" creators have talked about is the fact that all of the characters on the show exist in a moral grey area, without any clear-cut heroes and villains. And that’s especially true for Ser Otto Hightower, who served as Hand of the King for Jaehaerys and has now taken on that role for Viserys too. On the one hand, a part of Otto seems to genuinely want to steer Westeros towards peace and stability. On the other, he’s also clearly got his own personal agenda — especially when it comes to keeping Daemon out of power and using his daughter Alicent as a pawn in his social climbing.

Princess Rhaenys Velaryon (Eve Best) — the King’s cousin a.k.a. the "Queen Who Never Was" 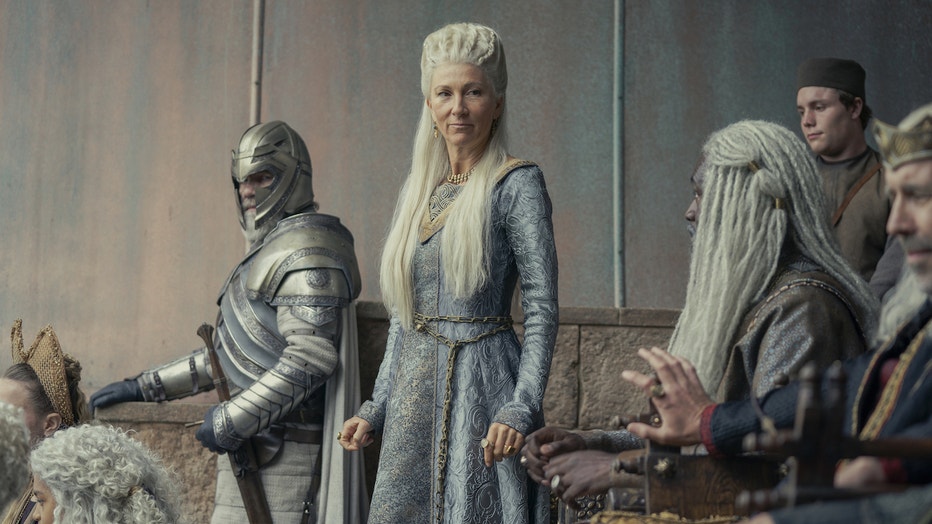 Though we don’t spend a ton of time with Rhaenys in this premiere, she nevertheless makes a major impression. Known as the "Queen Who Never Was," Rhaenys arguably had an even stronger claim to the throne than her younger cousin Viserys. But the Great Council decided to go with Jaehaerys’ oldest male relative instead, setting a legal precedent Westeros has followed ever since. Now Rhaenys has big "I drink and I know things" energy, not to mention two young children who have major clout as the descendants of two noble houses.

WATCH FREE ON TUBI: The historical drama series "Rome" — get the app 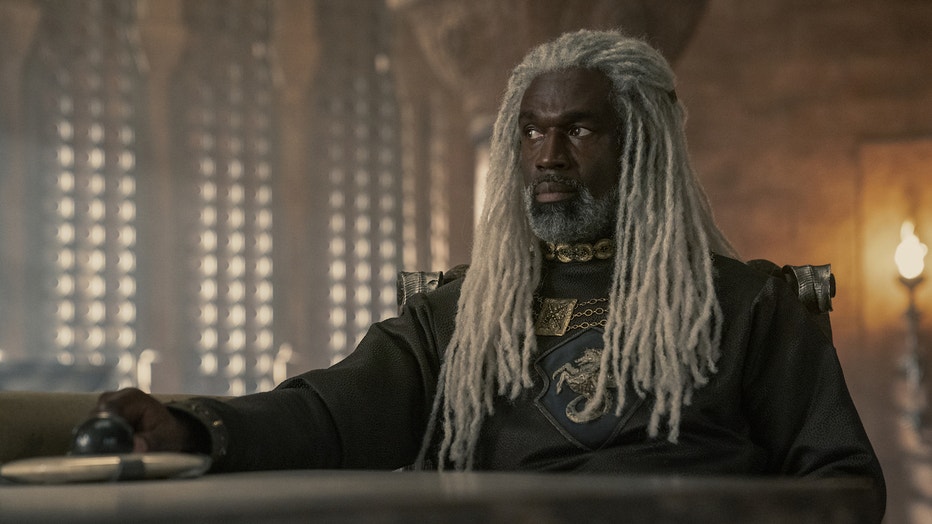 The main man in Rhaenys’ life is her husband Lord Corlys Velaryon, who also serves on the King’s small council. House Velaryon has noble roots as far back as House Targaryen, but while the Targs have dragons, the Velaryons are masters of the sea. Corlys, in particular, is a famous seafarer known as "the Sea Snake." And his focus on the oceans is why he’s so concerned about a small chain of islands known as "the Stepstones," which could provide a route for the Free Cities of Essos to take over Westeros’ ports. Really, though, Corlys just doesn’t seem like the biggest fan of King Viserys or Ser Otto. And given his wife’s previous claim to the throne, he’s interested in using this crisis of succession to strengthen his own family’s power in any way he can. 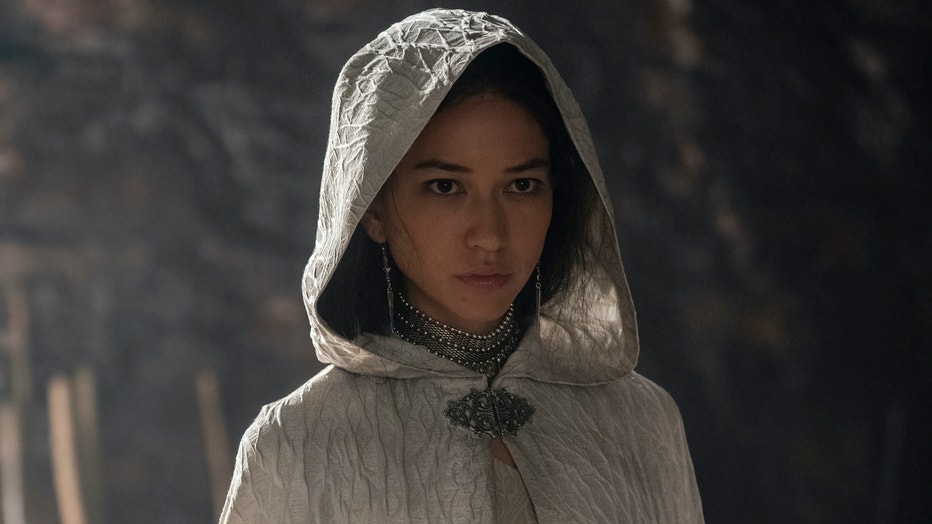 Like Ros and Shae before her, Mysaria is a savvy sex worker who plays her own game of thrones with Westeroi royalty. In this case, she aligns herself with Prince Daemon — her frequent (and hard to please) customer — and his hopes of sitting on the Iron Throne. 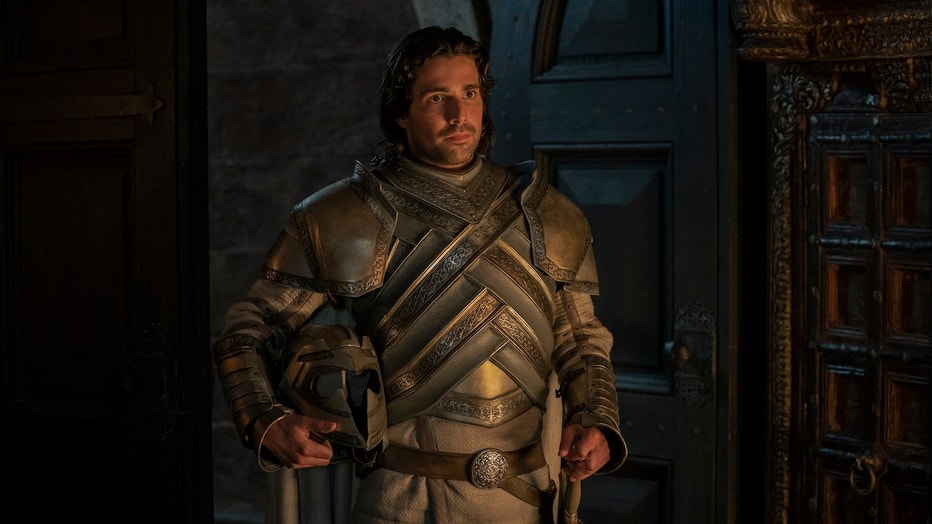 This handsome, common-born Dornish knight makes a major impression when he bests Daemon at a jousting tournament (and proves his magnanimity by allowing Daemon to yield the fight). Though Ser Cole doesn’t have a ton to do in this premiere, it’s clear from the way he catches Rhaenyra’s eye that he has a bigger role to play in the series. 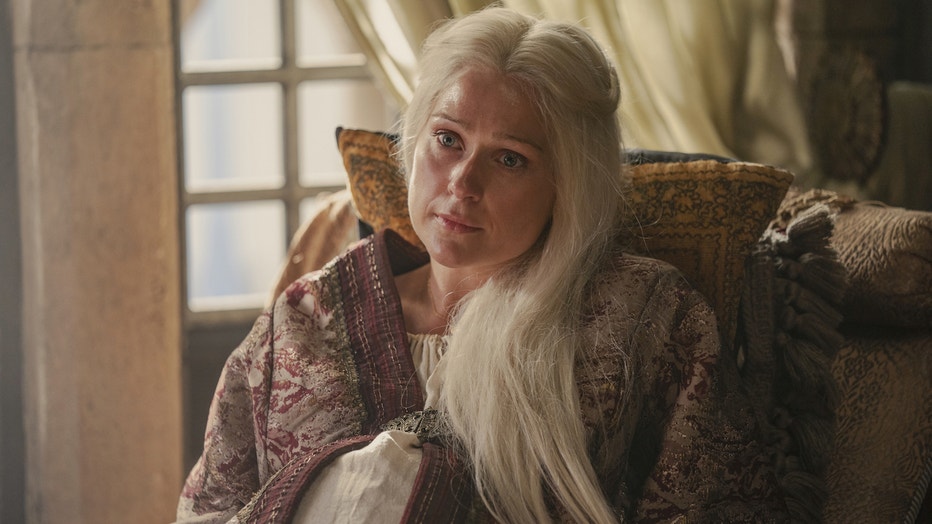 Pour one out for poor Queen Aemma, who kicks off this premiere with one of the most haunting deaths in the franchise’s history. During a difficult breech labor, King Viserys decides to sacrifice his wife to save his unborn heir — who winds up dying shortly after he’s born anyway. It’s a brutal, but pointed sequence that sets up childbirth as the "battlefield" for Westerosi women and shines a light on the human cost of patriarchy. Though Aemma may be gone, the memory of her life and death will surely remain for Viserys and Rhaenyra.

All those old Targaryens 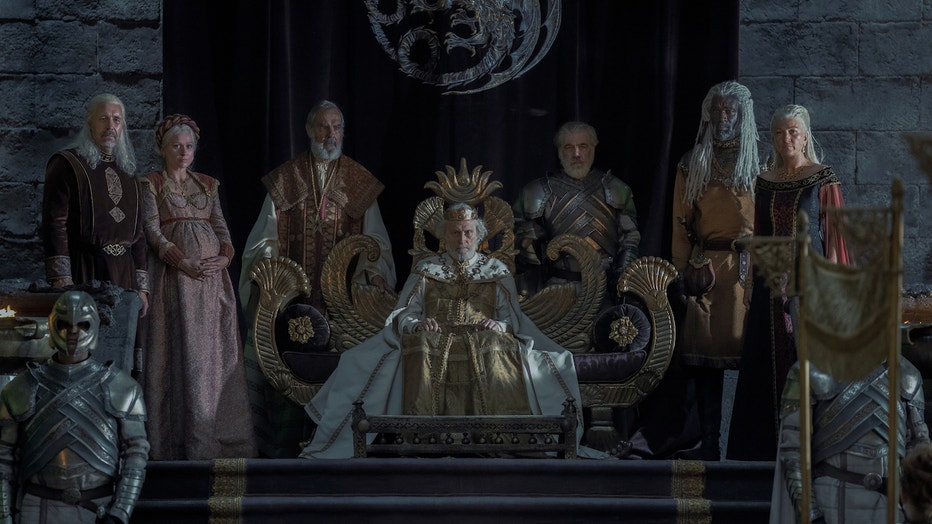 Like "Game of Thrones," there’s nothing "House of the Dragon" loves more than a loaded conversation about history. The characters frequently reference royals who came before them — most of whom we’ve never seen onscreen and many of whom share the same name as other characters on the series. So, yes, it can get real confusing real quick. But the basic history lesson is that Aegon the Conqueror united Westeros and founded the Targaryen dynasty with the help of his two sisters/wives (yep, it’s a Targaryen thing) Queen Visenya and Queen Rhaenys.

Aegon’s rule was followed by his two sons — kind, indecisive King Aenys and vicious, violent King Maegor — and then eventually by his wise grandson King Jaehaerys, who we first meet as the "Old King" in the "House of the Dragon" prologue. While Aegon set the gold standard for a confident, conquering warrior king, Jaehaerys set the gold standard for a peaceful, prosperous reign. Most of the potential monarchs in "House of the Dragon" are trying to live up to one or both of their legacies. Now we just have to wait and see if they can.

RELATED: ‘Game of Thrones: House of the Dragon’: Everything you need to know