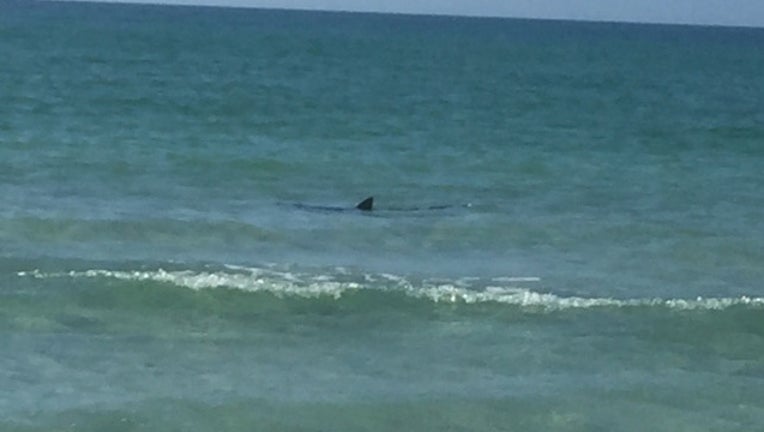 DANA POINT, Calif. (AP) - A sheriff's helicopter crew warned a group of paddle-boarders to get out of the ocean after spotting more than a dozen great white sharks along the Southern California coast.

Video posted online by the Orange County Sheriff's Department shows a school of sharks swimming near several people in the water Wednesday at Dana Point.

"You are paddle-boarding next to approximately 15 great white sharks," Deputy Brian Stockbridge announced over the helicopter loudspeaker to people in the water. "They are advising you exit the water in a calm manner. The sharks are as close as the surfline."

Advisories were posted for beaches up and down Southern California after shark sightings this week - including at San Onofre State Beach, where a woman was bitten by a shark April 29. She is recovering from wounds to part of her upper thigh

Sightings are not uncommon along the coast, but attacks are rare.

Fire Capt. Cameron Abel of the Marine Safety Unit in Long Beach said the increase in shark sightings was similar to an influx seen at this time last year.

Marine safety officials have attributed the activity to a "thriving aquatic ecosystem" in the area and estimated that 10 to 20 juvenile sharks swam near Long Beach daily.

The sharks "were around most of the summer," Abel told the Los Angeles Times. "We'd spot them periodically . and toward the end of the summer, they disappeared."

Nearly a year ago, a woman was bitten by a shark while swimming off Corona del Mar, about 15 miles (24 kilometers) to the north of the Wednesday sighting. Experts estimated the shark was at least 10 feet (3.05 meters) in length, judging from the bite marks.