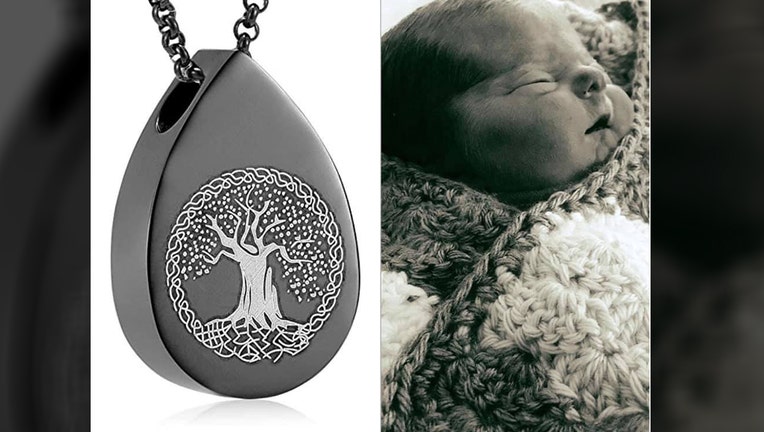 The necklace has been found and returned to the mother, Cheryl Nance Knabenschuh.

She wrote on Facebook: :I can never thank everyone enough for all your kind thoughts and prayers!!!! Every single one of you are amazing and will always hold a very special place in my heart!! Thank you so much!!!!"

A Utah mother is asking for the public's help finding a necklace that contains the ashes of her infant son.

Cheryl Nance Knabenschuh posted a photo of the lost necklace and her baby boy, Quinn, to Facebook on Wednesday. She says on Jan. 4, her and her husband attended some open houses in the Saratoga Springs and Lehi area.

"We also stopped at the 7-11 on Main Street in Lehi as well as Zupas in American Fork and Walmart in Cedar Hills. It wasn’t until after we were home later that day that I reached up for my necklace and realized it was gone," she wrote.

"It would be of no value to anyone else, but to me, it is beyond priceless."

Cheryl says she contacted each location she visited that day but no one has turned the necklace in.

"It breaks my heart knowing I lost this and would appreciate anyone that would be willing to share this in hopes that I can get it back. It would be of no value to anyone else, but to me, it is beyond priceless."

According to WPDE, at 20 weeks old, Quinn was diagnosed with Osteogenesis Imperfecta type 2. Cheryl was given the option to terminate her pregnancy, but she and her husband chose to continue so they could keep him close as long as possible.

Unfortunately, on April 22, 2018, 2 months before his due date, Cheryl had to have an emergency C-section and Quinn passed away. The necklace she wore was what she had to keep him close each day.