Betty White will be remembered by Los Angeles Zoo on Jan. 17

Betty White served as a trustee of the Greater Los Angeles Zoo Association for nearly 40 years. She will be remembered on Jan. 17, which would have been her 100th birthday.

LOS ANGELES - Betty White leaves behind a Hollywood legacy that has touched the hearts of millions — and on Monday, on what would have been her milestone birthday, fans and many organizations planned to pay homage to the late icon.

From visiting new exhibits and murals, to watching movies featuring White, to making donations in her name, here are several ways to remember and honor the legendary actress and comedian.

A movement, which has been dubbed the #BettyWhiteChallenge on social media, will pay tribute to White Monday while also helping animals in need. The challenge asks fans to pick a human society, local rescue or animal shelter in her memory and donate $5 in her name on Jan. 17.

The Humane Society of the United States said there are numerous animal rescues, organizations and shelters to which you can donate as a way to honor the iconic actress.

"These are challenging times for the thousands of extraordinary local animal shelters and rescue groups across the United States, and there could be no better tribute to Betty White than to support them directly with donations, volunteer time and other commitment," Kitty Block, the president and CEO of the Humane Society of the United States, said in a statement. "For decades, she was one of the nation’s most visible champions of animal adoption, enhanced veterinary care, humane education, and the benefits of pet-keeping, and she understood the deep reliance of local groups on the generosity and engagement of a sympathetic public. We are excited about what the Betty White Challenge could mean for these deserving organizations."

Lindsay Hamrick, the director of Shelter Outreach, Engagement and Training at the Humane Society of the United States, echoed Block’s sentiment during an interview with FOX.

"If there was ever a time to support them, it’s during this pandemic, which has been really critical for the animal shelters in your community to be able to support the members of the public and the pets that they love," Hamrick said. "Even five dollars is going to help ensure that they have programs to help homeless animals and to provide services to the community such as low-cost veterinary care or vaccinations."

Hamrick added: "I hope that this challenge really encourages folks who have never connected with their local animal shelter to reach out and find out about the work that they do."

Betty White dead at 99; A look back a her prolific life | LiveNOW from FOX

Betty White, a legendary TV actress known for her iconic roles in "The Mary Tyler Moore Show" and "The Golden Girls," has died. She was 99.

Where to donate to animals in honor of Betty White

Listed below are a few of the organizations accepting donations in honor of White. You can also reach out to your local shelter or animal rescue to make a donation in your own community.

White served as a trustee of the Greater Los Angeles Zoo Association for nearly 40 years — and the zoo plans to honor the late-actress Monday.

Tom Jacobson, the president of the association, said the zoo plans to honor White on Jan. 17 with a number of events at the park and online, including a walk through the zoo in White’s "footsteps" with several displays of her and her love for specific exhibits.

"We had been working with Betty on how we might plan that day and celebrate a milestone, and we’re still going to celebrate it. It’s just going to be a celebration of her whole life," Jacobson said. "When someone like Betty loves animals and loves zoos, that influences other people in a really positive way."

He said White joined the zoo’s board in 1976 and was immediately an advocate for many different species.

"The first thing she did when she joined our board was create a television special to introduce our zoo to the Los Angeles community," Jacobson told FOX. "She advocated for a new gorilla habitat, which is one of the best in the country."

You can learn about "Betty White’s Zoo Tour" at the Los Angeles Zoo here.

To honor the late TV icon, a new mural of Betty White is also on display in Los Angeles at the corner of Melrose and Genesee Ave. 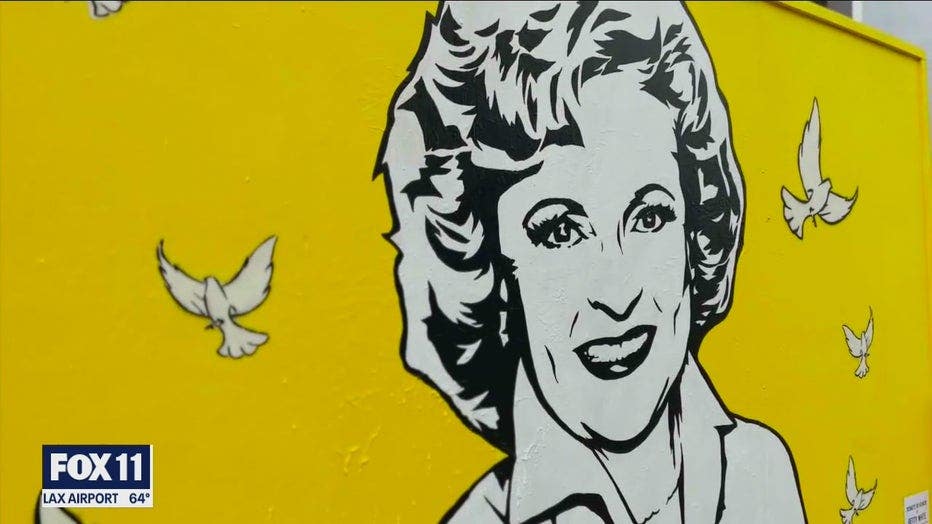 "Originally, I was actually going to do a mural for Betty for her 100th and I wrote down her assistant’s name to try to get a hold of her for it, and then she died three days later, so I was like, oh man I have to actually get on this," muralist Corie Mattie told FOX 11 Los Angeles.

LA Hope Dealer, as she’s known, got to work. She spent 15 hours using her signature three shades of paint to continue spreading the good word.

"I think Betty would love it. I think the idea of the doves is spreading hope and joy and being kind is what we all need to start doing," said Deb Downing, an LA Hope Dealer fan.

After White’s death on New Year’s Eve, Fathom mourned the actress’s death and announced it would move forward with its plans to distribute the movie.

"We will go forward with our plans to show the film on January 17 in hopes our film will provide a way for all who loved her to celebrate her life—and experience what made her such a national treasure," producers Steve Boettcher and Mike Trinklein said.

The movie, now title "Betty White: A Celebration," will play in nearly 900 movie theaters on Jan. 17, the day of White’s centenary.

You can find movie tickets for "Betty White: A Celebration" in your area here. 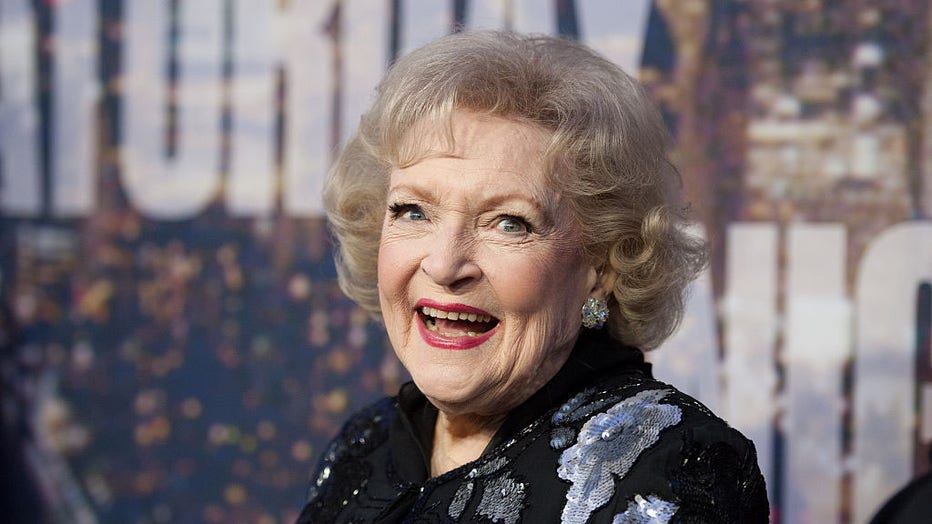 Life with Elizabeth (1952): White became the first woman ever to produce a sitcom with this 1952 gem, in which she played a newlywed adjusting to the trials and tribulations of married life.

Date with the Angels (1957): Another jewel in Betty White’s sitcom crown, this one starred white as Vickie Angel, a woman newly married to an insurance salesman. Watch this one for a glimpse of the unbeatable timing that made her a sitcom icon.

Betty White’s Pet Set (1971): Betty White, a legendary champion for animals, interviews some furry friends and some less furry but more famous ones in this brief series. Her sit-down with friend and co-worker Mary Tyler Moore is not to be missed.

The Retrievers (2001): When the Lowrys' newly adopted stray golden retriever gives birth, they give away her litter and, in the process, learn what it means to be a family.

Tubi has an expansive library of nearly 30,000 movies and TV shows from almost every major Hollywood studio. The free streaming service is available on a wide array of devices, including Roku, Comcast Xfinity, Amazon Fire TV, and more. Head to tubi.tv.com or the app store to watch.