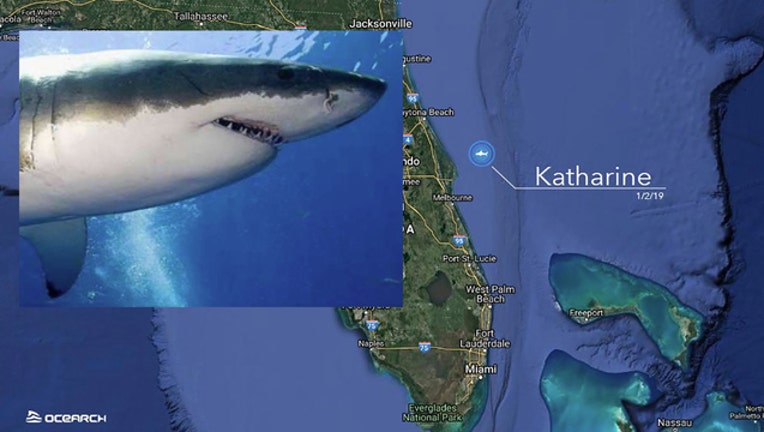 TITUSVILLE, Fla. (WOFL FOX 35) - She’s a shark that’s coming for dinner. And she’s so close, you’ll want to look twice before going into the ocean for a dip.

Katharine The Great is off Space Coast.  In August of 2013, marine biologists with OCEARCH caught and tagged the shark off of Cape Cod, Massachusetts.  Since then, her satellite tracker has pinged semi-regularly off Florida.

This week, she’s in the area of Cape Canaveral. The reason?  Katherine is all about food.  Our water is the perfect temperature right now for a Katharine buffet.

“From January to May, this is kind of a winter foraging area,” said Chris Fischer, the Founding Chairman & Expedition Leader of Ocearch.

The News Station asked him how close Katharine might get.

“You know, she’s going to be, sometimes in the surf break, if that’s where fish are," Fischer said..  "We tracked a 4,000-pound white shark right inside the surf break underneath the old Jacksonville Beach Pier a few years ago. We’re tracking these sharks up into the mouth of the rivers, into the estuaries.  If the food is on the beach, then she’s going to be cruising the beach.”

Fischer says Katharine is at the point in her life where it’s possible, probable, that she’s pregnant.