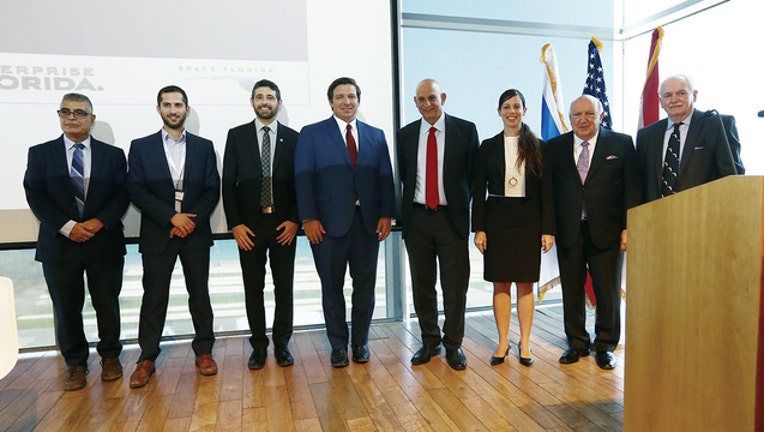 A fourth grant, which would push the amount to just over $1 million, awaits final approval, said Space Florida President and CEO Frank DiBello during a meeting at the Peres Center for Peace and Innovation in Tel Aviv.

The awards were announced as Space Florida, the state’s aerospace-business arm, and the Israel Space Agency signed a memorandum of understanding intended to increase collaboration in scientific programs.

“We’re thrilled with the extension of this program because it’s been highly successful, but more so to the possibility of bringing an additional range of technologies that can benefit both countries,” DiBello said.

The grants included $250,000 for the Harris Corp. and Nano Dimension Israel to develop 3D printing materials that can survive in the harshness of space, a proposal expected to lower the manufacturing cost of small-satellites; $265,000 grant for Cadw Therapeutics LLC, The Moffitt Cancer Center and Research Institute and SpacePharma R&D Israel to test human stress and the impact of space on human DNA; $250,000 for Semplastics EHC LLC of Oviedo, and Polymertal LTD Israel to develop “a novel class of hybrid materials, suitable for aviation, and space applications, ranging from structural parts to electronic assemblies.”

DiBello said a fourth award, pending final approval, is to go to a partnership between Lockheed Martin Space Systems and StemRad, Ltd. Israel to complete development of AstroRad, a wearable astronaut radiation shield. The radiation shield is scheduled to be sent to the International Space Station in July for testing.

The grant is worth $250,000. All four grants were among 12 finalists approved by the Space Florida Board of Directors on May 15.