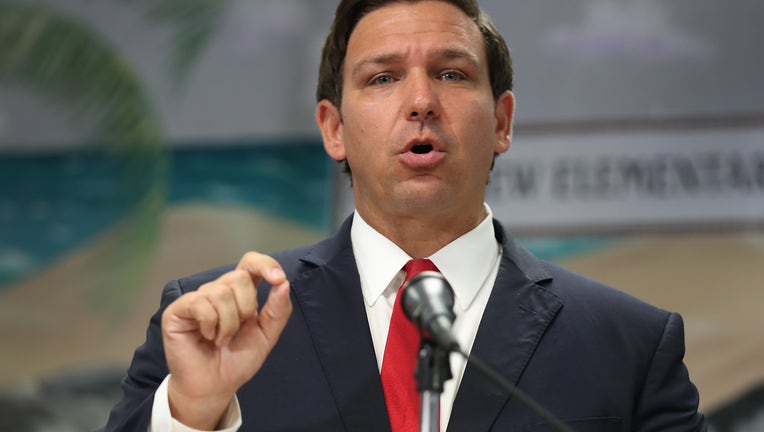 TALLAHASSEE, Fla. - Florida Gov. Ron DeSantis is pursuing an agenda this year that builds on some of his successes in his first year in office, including education, the environment and immigration.

DeSantis has declared 2020 “the year of the teacher” and is proposing raising the minimum teacher salary to $47,500; he’s pushing for legislation that will help Florida combat blue-green algae and other environmental issues and he wants lawmakers to approve E-verify, a system that checks whether someone can legally work.

“We’ve put out some pretty major initiatives over the last few months,” the Republican governor said when he released his proposed $91.4 billion budget. “The environment, we’re going to keep the momentum on that, and then we have a lot of major education initiatives.”

But after getting nearly everything he wanted during his first legislative session, he might find this year’s to be a little tougher, with concerns about his teacher raise proposal and reluctance to pass E-verify. The legislative session begins on Tuesday.

House Speaker Jose Oliva and Senate President Bill Galvano, both Republicans, have expressed concerns about DeSantis’s proposal to raise the minimum teacher pay statewide, which would cost about $600 million.

While Galvano said raising teacher salaries is a worthy goal, taking a blanket approach to a state as large and diverse as Florida may not be easy.

“There are districts that have different levels of pay currently, you have different costs of living in certain districts, and when you go through and put it as a one-size-fits-all, then you can create some practical problems as well as some inequities,” Galvano said.

House Democratic Leader Kionne McGhee agrees with DeSantis that teachers need raises across the board, but he thinks the state should go beyond the governor’s proposal.

“Right now the thing I can agree with him on, is this is the year for the teacher,” McGhee said.

But McGhee wants to make sure veteran teachers aren’t all of a sudden making the same as a new hires, and he wants to make sure the state keeps raising teacher salaries over the next few years. He has a bill that gives all teachers a 5% raise, or brings them up to $47,500, which ever is greater. The plan also calls for raises in base salary or percentage raises the following two years.

Last year DeSantis successfully pushed for a bill that bans “sanctuary cities.” It requires local governments cooperate with federal authorities in enforcing immigration laws. But his push for E-verify this year might meet more resistance.

“The Senate has not come out and endorsed the E-verify proposal as presented. I’ve had many senators that have raised concerns about the additional obligations being placed on private employers and private citizens. I think we have to take these concerns seriously,” Galvano said.

DeSantis’s predecessor, Republican Sen. Rick Scott, refused to acknowledge climate change and sea level rise. By contrast, DeSantis has built a high approval rating in part because he’s taking on those issues, as well as being more aggressive in the state’s battle against blue-green algae blooms that have hurt the environment and tourism.

He’s pushing for a wide-ranging bill that attempts to document and reduce nutrients flowing into waterways through farms, septic systems, stormwater runoff and faulty sewerage lines that contribute to the blooms.

Environmentalists notice the difference between DeSantis’s approach and Scott’s, but say he can do more.

“We have a very urgent situation here and we’re taking baby steps,” said Deborah Foote, a lobbyist for the Sierra Club. “Certainly there is greater discussion, but the big question is whether the Legislature and leadership and the governor can get something worthwhile done.”

And while DeSantis wants to spend $100 million to purchase conservation land, Foote says that’s far below the $470 million the group believes should go toward land preservation under a constitutional amendment voters approved in 2014 that dedicates a portion of real estate tax to that effort.