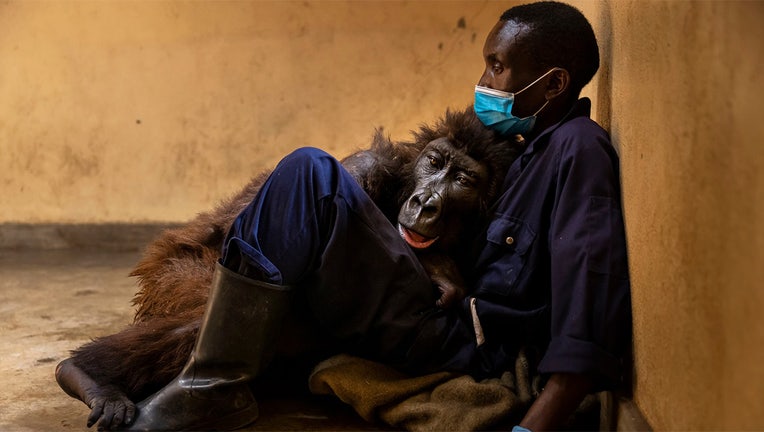 NEW YORK - A beloved orphaned mountain gorilla died in the arms of her caretaker and lifelong friend.

Ndakasi passed away at the Virunga National Park in the Democratic Republic of Congo.  Park officials say it came "following a prolonged illness in which her condition rapidly deteriorated."

Ndakasi took her final breath in the loving arms of Andre Bauma.  The moment was captured in an emotional photo shared by the park.

Born to the Kabirizi group in April 2007, Ndakasi was only two months old when Virunga rangers found her clinging to the lifeless body of her mother, gunned down by armed militia hours earlier.

With no other family members present, rangers quickly recuperated the infant gorilla and transferred her to a rescue center in Goma, where she was first introduced to Andre.

READ NEXT:  Mama bear and cub enjoy slides at playground

All night long, Andre held the baby close to him, keeping her tiny body tightly against his bare chest for warmth and comfort. She survived; however, the trauma of losing her family coupled with a long period of rehabilitation meant that Ndakasi was too vulnerable to return to the wild.

Along with fellow orphaned gorilla Ndeze, Ndakasi was transferred to the Senkwekwe Center after its creation in 2009, where she went on to live a peaceful life with her caretakers and other orphaned mountain gorillas for over 11 years.

She also rose to internet fame in 2019, when a "selfie" of her went viral on Earth Day. The photo features Ndakasi and her partner-in-crime, Ndeze, both standing relaxed on two feet, bellies out with cheeky grins.