A new, wearable device may help alert you if you are exposed to COVID-19. Researchers at the Yale School of Public Health developed an easy-to-clip-on device that can help detect low levels of SARS-COV-2 and subsequently whether a person has been exposed.

The number of new coronavirus cases and deaths reported to the World Health Organization fell for a third consecutive week, a trend likely helped by the dismantling of testing and surveillance programs.

In its latest weekly report on the pandemic, issued late Tuesday, the U.N. health agency said the more than 7 million new cases reported represented a 24% decline from a week earlier. The weekly worldwide number of COVID-19 deaths, was down 18%, at over 22,000.

WHO said the decreases "should be interpreted with caution" as numerous countries where the virus is starting to subside have changed their testing strategies, meaning far fewer cases are being identified.

New cases and deaths are falling in every region of the world, including the Western Pacific, where a surge of infections has triggered severe lockdown measures in China. 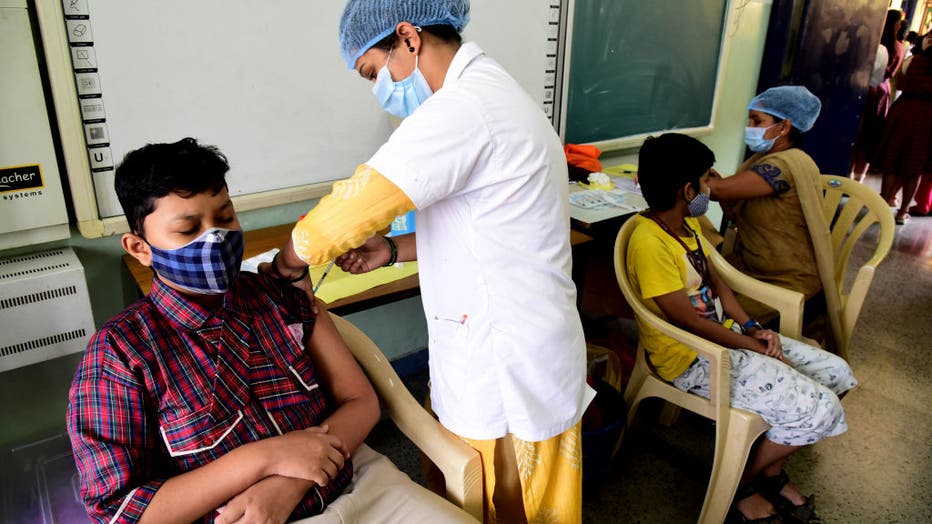 FILE - Students in the 12-15 years age group get inoculated against Covid-19 during a special vaccination drive by Navi Mumbai Municipal Corporation (NMMC) for school students of DAV Public School, Nerul, Seawoods, on April 5, 2022, in Navi Mumbai, I

WHO said it was monitoring several mutants of the virus descended from the omicron variant, including some recombined forms of existing omicron subvariants.

In a separate statement, the health organization said scientists in Botswana and South Africa have detected new forms of the omicron variant, labeled as BA.4 and BA.5, but aren’t sure yet if they might be more transmissible or dangerous.

To date, the new versions of omicron have been detected in four people in Botswana and 23 people in South Africa. Beyond Africa, scientists have confirmed cases in Belgium, Denmark, Germany and the United Kingdom.

WHO said there was so far no evidence the new sub-variants spread any differently than the original omicron variant.

"There is no cause for alarm with the emergence of the new sub-variants," Dr. Matshidiso Moeti, WHO’s Africa director, said in a statement. "We are not yet observing a major spike in cases, hospitalizations or deaths."

The agency called on all countries to sequence at least 5% of their COVID-19 samples; many countries, including Britain, Sweden and the United States, recently scrapped their widespread testing programs as the number of severe cases dramatically declined.

RELATED: New COVID-19 outbreaks give US glimpse at living with the virus: 'Get used to it'

Still, the U.S. will soon mark 1 million COVID-19 deaths, and the virus is continuing to cause concern in China.

Officials warn Shanghai still doesn’t have its latest surge in omicron-involved cases under control despite a "zero-tolerance" approach that has seen some residents confined to their homes for three weeks or longer.

The lockdown has led to frustration among Shanghai residents about running out of food and unable to get deliveries. Censors have diligently scrubbed complaints from social media.

State-controlled outlets describe a successful campaign to provide food and other supplies and counseled residents that "persistence is victory."

RELATED: Johns Hopkins health official urges vaccinations as COVID cases slowly creep up across the US