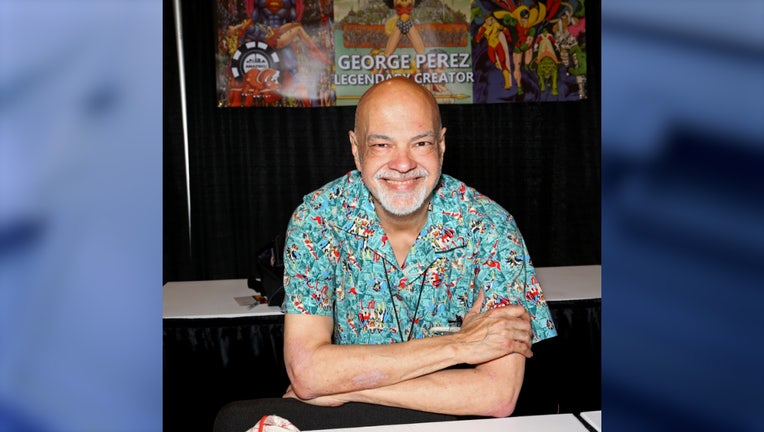 SANFORD, Fla. - George Perez, an influential artist and writer in the comics community – and someone who worked with both DC Comics and Marvel Entertainment – died Friday, according to family and friends. He was 67.

"To all of George’s fans and friends, Constance here, with the update no one wants to read. George passed away yesterday, peacefully at home with his wife of 490 months and family by his side. He was not in pain and knew he was very, very loved," read a statement on his website and shared on Perez's social media accounts.

"To know George was to love him; and he loved back. Fiercely and with his whole heart. The world is a lot less vibrant today without him in it. He loved all of you. He loved hearing your posts and seeing the drawings you sent and the tributes you made. He was deeply proud to have brought so much joy to so many," the statement continued.

He reportedly died at his home in Sanford, Florida.

Perez worked for Marvel and DC Comics, and known for working on a variety of entities, such as Wonder Woman, The New Teen Titans, Avengers, and The Fantastic Four.

"George Pérez made everything look effortless. His contributions were pivotal in both driving and reinventing DC’s long and rich history," DC Comics said in a statement on Twitter.

In its own statement, Marvel Entertainment remembered Perez as "an artist, a writer a role model" and a friend" whose "legacy of kindness and generosity will never be forgotten."

Perez was scheduled to attend MEGACON in Orlando in the middle of May. His memorial will now be held at the convention, according to organizers.

"It is with a heavy heart that we share the loss of one of our incredible MEGACON Orlando family members. George Pérez, beloved artist, writer and philanthropist passed away yesterday at his home in Sanford with his wife and family by his side," the statement read.

The memorial service is scheduled to be held Sunday, May 22 at 6 p.m. The service will be open to the public.