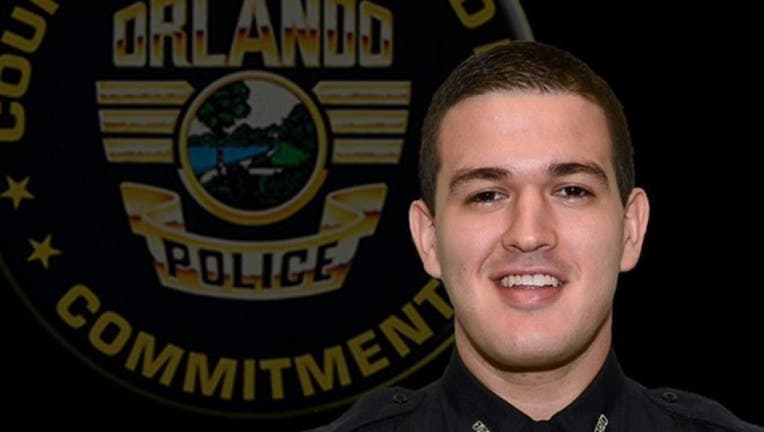 He served the community for over seven years as a law enforcement officer.

Officer Valencia fought for his life alongside his family for two years since responding to a call that resulted in his hospitalization. He was awarded a purple heart by the Orlando Police Department for his heroic response.

FOX 35 spoke one-on-one with his wife, Meghan, on Thursday.

FOX 35's Amy Kaufeldt spoke with Meghan Valencia, the wife of fallen Orlando police officer Kevin Valencia, about how much she is going to her husband.

"For me, it's not just about what they said... it genuinely showed me we are family," Meghan Valencia told FOX 35's Amy Kaufeldt about the service and the support from the law enforcement community.

She said now that she is alone, "I have to do things I never thought I had to do," adding that she wants her kids to "know that they can do anything because their mommy and daddy can do anything."

Meghan added that through this all, "my faith in God hasn't ever been stronger than it is today because I know that I'm going to be okay and we're going to be taken care of because I've asked for that."

Part 2: What led to death of Officer Kevin Valencia

Before Officer Valencia's death, his wife told FOX 35 that it seemed like he was improving, saying that he gave her a kiss and rubbed her hair. With that, his death came as a shock.

In the days leading up to his passing, Meghan said that she "got a call from the director at the facility where he was at saying, 'Kevin was being admitted to the hospital.' I didn't have anybody to watch my kids at that point. I was making calls to see if somebody can come."

She explained that "Kevin was admitted with a 107 fever. His lactic acid was very high. His PH levels were very low. So essentially, he was like burning up on the inside."

Meghan added that "they put him on a ventilator, intubated him, and Kevin had a DNR, which is a 'do not resuscitate.' But, because of COVID, they didn't have that paperwork. So, they ended up intubating him, which in a lot of ways, was a blessing because they said if they hadn't intubated him, I would not have been able to make it to the hospital."

Doctors explained to Meghan that Officer Valencia would be more comfortable in hospice and that people would be able to say goodbye to him.

She told FOX 35 that "I'm grateful that we did at least have a chance to say goodbye, and that I was with him when he passed."

Part 3: How Meghan is trying to move forward

On Monday, March 15, 2021, Orlando Police Officer Kevin Valencia passed from critical injuries obtained in the line of duty in 2018.

Meghan is trying to move forward and remain strong for her kids.

Looking back at her husband's death, she said that "I really, really think he had a conversation with God and said, 'I can't leave her like this,' so I had two and half years to kind of start a new normal in a way."

She added that "in a lot of ways, I don't have to learn something new, I just have to accept the finality that I don't get to go visit Kevin anymore, or bring our kids to see him anymore."

Tune in to Good Day Orlando on Friday for more of our one-on-one with Meghan.