﻿FOX 35 joins python hunters as they trek through Everglades﻿

Just one Orlando station is taking you along to hunt pythons in the Florida Everglades. It takes a good and an instant reaction to catch the elusive and invasive snake. Kevin Officer and Isaac Rempe with Affordable Wildlife Removal trekked through the trails and scanned the roads for pythons and they allowed us to join them.

MIAMI - There is a massive effort to wipe out pythons that have taken over the Florida Everglades.

People from around the world, including Central Florida, are hoping to be paid by the state to find and kill the monster snakes. The News Station went python hunting with some Volusia County trappers to see how it’s done.

Kevin Officer and Isaac Rempe with Affordable Wildlife Removal trekked through the trails and scanned the roads for pythons. Officer saw one from the truck and leaped into action to catch the three-foot juvenile snake.  Rempe said that over the years, they have been able to catch 13 and 14-footers. He said the invasive predators do not go down without a fight. 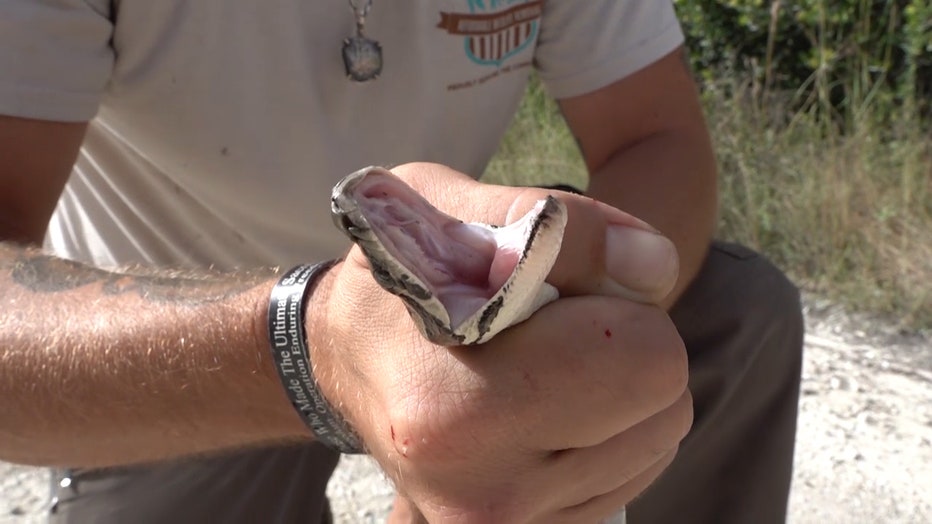 Believe or not, trying to catch and kill pythons has become a highly sought after job. Florida has started paying people to do it. The South Florida Water Management District recently announced 25 openings. Rempe and Officer have applied along with about 2,500 others.

“We’ve had applications come in from Canada, and the Middle East, South America, all over the world,” said Rory Feeney of South Florida Water Management District.

He said the contractors get paid minimum wage and then receive bonuses for bigger snakes.

“They get $50 for the first four feet of snake. Twenty-five dollars for each additional foot of snake,” Feeney told the News Station.

The largest Burmese python found so far in the everglades was 18-feet, four-inches. The giant snakes are choking the natural ecosystem in the Everglades. Feeney said studies show that around 95 percent of the fur-bearing mammals have been wiped out.

“You guys didn’t see any mammals here,” Officer said. “They’re used to be deer, there used be raccoons, possums, there’s nothing here. They’re getting the alligators.”

State officials just announced more than 3,600 snakes have been killed since 2017 but no one knows how many are left.

Officer and Rempe said whether they are paid or not, it is their duty to take back the Everglades one snake at a time.

“We have to do something,” Rempe said.

“We have to be proactive... Nothing will really kill one of those pythons - except us,” Officer added.