Former Vice President Joe Biden has narrowed the gap in Florida in his challenge to President Donald Trump, according to the last poll conducted by InsiderAdvantage before Election Day.

LAKE MARY, Fla. - Former Vice President Joe Biden has narrowed the gap in Florida in his challenge to President Donald Trump, according to the last poll conducted by InsiderAdvantage before Election Day.

Pollster Matt Towery Sr. said the data shows Trump leading Biden by one percentage point among likely voters in the Sunshine State.  That is down from a three-point advantage held by Trump in an InsiderAdantage poll conducted last month.  Third-party candidate Jo Jorgenson picked up 1%.

What is significant in this latest data is the number of undecided voters.  In October, InsiderAdantage found that 10% of those polled were unsure about which candidate they would vote for, but that number now stands at 3%. 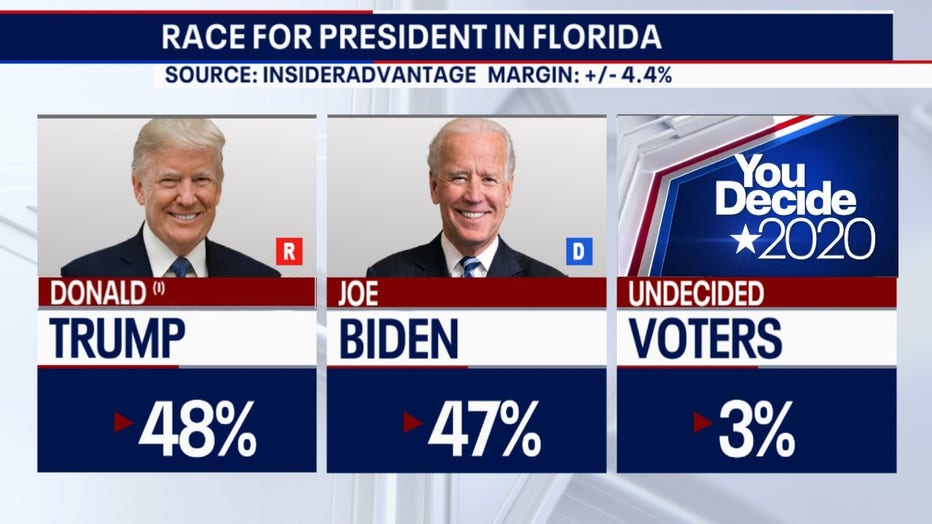 When asked, “If the election for President were being held today and the candidates were Donald Trump, the Republican,
Joe Biden, the Democrat, or Jo Jorgensen, the Libertarian, for whom would you vote?” results were as follows:

The survey of 400 likely Florida voters, conducted on Nov. 1-2, involved live calls and interactive voice response calls to both landlines and cell phones. It is weighted for age, race, gender, and political affiliation. It has a margin of error of plus or minus 4.4%.

Towery predicted Trump's 2016 victory on FOX affiliates, just days prior to the election, signaling that many polls were failing to accurately reflect support for the Republican candidate. He also showed Barack Obama winning key battleground states in 2008.